SPRINGDALE -- As many as a dozen women at a time stayed in one Springdale home in an adoption fraud scheme involving 30 or more pregnant women a year, according to the U.S. Department of Justice.

"Make no mistake. This case is the purest form of human trafficking," said Duane "Dak" Kees, U.S. attorney for the Western District of Arkansas.

Petersen's law firm enticed pregnant Marshall Islanders who were close to having their babies to give up their children for adoption, paid their airfare to the United States for that purpose and then gave them airfare home, all in violation of a specific clause in a treaty with the islands' government that forbids travel solely for that purpose, according to the indictment.

The federal investigation began three years ago when the Washington County and Benton County bar associations told investigators that something was amiss with the practices of adoptions handled by the Paul D. Petersen law firm, which has a mailing address and representatives in Fayetteville, Kees said.

The investigation is not over, he said. More individuals associated with the Petersen firm and with other firms with similar practices are under federal scrutiny, he said.

The scheme started in 2014 and possibly earlier, according to the indictment.

Some of the expectant mothers who were close to giving birth slept on the floor while housed four to a room, Kees said. They were enticed to Northwest Arkansas from the Marshall Islands by promises of money for giving up their newborns to parents seeking adoptions through the Arkansas courts, according to reports.

Takehisa is named in four of the 19 counts in the indictment, which the grand jury returned Monday.

Housing and food expenses were minimal at the home, the indictment states.

"One of the mothers who cooperated with us said they were treated like property," Kees said.

The expectant mothers were told they would be well paid and well cared for, but were dependent upon Petersen's law firm once they arrived in the United States, he said.

Petersen was being held Wednesday in lieu of a $500,000 cash bond in the Maricopa County jail on state charges in Arizona. Similar housing of pregnant women there led to 32 state charges based on Petersen's practice of enrolling those women for Arizona Medicaid benefits for which they weren't eligible since they were only temporary Arizona residents, according to reports.

Petersen also faces 11 similar charges in Utah, that state's attorney general announced. Petersen is licensed to practice law in Arizona, Utah and Arkansas, according to his law firm's website.

"Petersen is accused of using false information to place the Marshallese women on state-funded health care in order to pay for delivery costs, bilking the state out of more than $814,000," said a statement released by Arizona Attorney General Mark Brnovich.

The only federal case is being pursued in Arkansas because the federal investigation started here, Kees said. Petersen will have an appearance in federal court in Fayetteville, tentatively set for Oct. 29, Kees said. Arkansas Attorney General Leslie Rutledge attended Wednesday's news conference. Kees said state charges in Arkansas have not been ruled out.

The adoptive parents in these cases, which federal investigators believe to be in the hundreds, aren't believed to have been aware of the fraud scheme and aren't targets of the investigation, Kees said. It appears their adoptions are binding under Arkansas law.

"Mr. Kees is right in that this is a complex issue" on paternal rights of the children involved, said Josh Bryant of Rogers, a private attorney, adoptive parent and longtime advocate of adoption reform. He and state Rep. Clint Penzo, R-Springdale, co-wrote bill in the previous legislative session to overhaul adoption, but failed to get it passed.

With the scheme starting in 2014, children involved could be preschoolers by now.

Takehisa of 2006 Cardinal Drive in Springdale was charged Wednesday with one count each of money laundering and mail fraud. Takehisa also was charged earlier this year in U.S. District Court in Fayetteville with aiding and abetting alien smuggling, a violation of the Compact of Free Association.

Four women told authorities that they went to Northwest Arkansas specifically to have their babies for adoption, according to a complaint in Takehisa's first case. Two said Takehisa offered to pay them $10,000, pay their airfare and put them up at a house in Springdale until they gave birth. One said she was paid only $6,000, the other $4,000. The money was paid in cash by Takehisa after the babies were born, they said.

"Nine out of 10 adoptions I do are for a Marshallese child," Martin said at the time.

The large number of Marshallese women giving up their children for adoption caused widespread concern among legal, medical and advocacy communities in Northwest Arkansas in 2015. They worried that some of the women were signing documents in a language they didn't understand and may not have known that they had no rights to the child once the baby was adopted.

Community leaders openly questioned whether the women knew all of their rights, such as the right to withdraw consent for an adoption. Others expressed concern about how the expectant mothers were reimbursed for expenses related to their pregnancies.

Bringing any Marshallese parents or parents-to-be to the United States from the islands for the purpose of carrying through adoptions breaches a 2003 amendment to the compact between the two countries that allows travel without visas.

There are concerns even in cases where a Marshall Islander has lived in the United States for years, said Alik and Melisa Laelan, a Marshallese language interpreter for regional courts and an advocate for Arkansas' islander population. They were interviewed on the topic last year.

Adoptive mothers are rarely represented by their own attorneys, Alik and Laelan said. The adoptions are most often arranged through attorneys of the prospective parents. The Marshallese government is eager to see that the rights of its citizens are protected, Alik said.

The cultural difference between adoption in the Marshall Islands and in the United States is well-known, Alik and Laelan said.

"I was adopted, and I saw my real parents all the time," Alik said. In the islands, adoption is an open system where all parties maintain a close relationship.

In the United States, though, a woman who gives up a child for adoption forfeits her rights as a parent. For instance, there is no right to visitation or having any role in the child's raising. The Marshallese government wants to ensure that its citizens are fully aware of what they are giving up and suspects that is often not the case. Even an adoptive parent who realizes the difference or who has doubts toward the end of the process may fear the repercussions of backing out of a deal.

The Marshallese government on the islands has begun taking a more protective stance, Alik said.

In March, Marshall Islands officials charged a Springdale man, Justin Aine, with human trafficking, according to the Marshall Islands Journal. Kees said Wednesday that Aine's case and Petersen's are linked, but he declined to comment on how, and whether the Marshallese government will file any charges in the Petersen case.

Aine, 46, was charged by the assistant attorney general with one count each of trafficking in person, unlawful solicitation and monetary inducement, according to an article in the Journal.

Aine is accused of recruiting Susan Koraja by giving her $120 cash and the promise of $10,000 in exchange for her giving up her 1-month-old for adoption when they reached the United States, according to the newspaper. Charged along with Aine were Aiti "Hatty" Anidrep, 49, and Sally Abon, 53.

Aine promised Koraja he would help her family move to the United States if she gave up her child for adoption, according to the Journal.

In Benton County and Washington County, at least four Marshallese women since 2015 have been convicted of fraud involving adoptions. In all of the cases, the pregnant women accepted money from two sets of would-be parents and failed to give up the child after birth.

Federal charges faced in Arkansas by Paul Petersen of Arizona:

• One count of conspiracy to commit visa fraud

• One count of conspiracy to commit money laundering 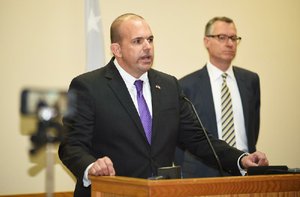 Photo by David Gottschalk
FILE — Duane “Dak” Kees, U.S. attorney for the Western District of Arkansas, is shown in this Oct. 9, 2019, file photo.