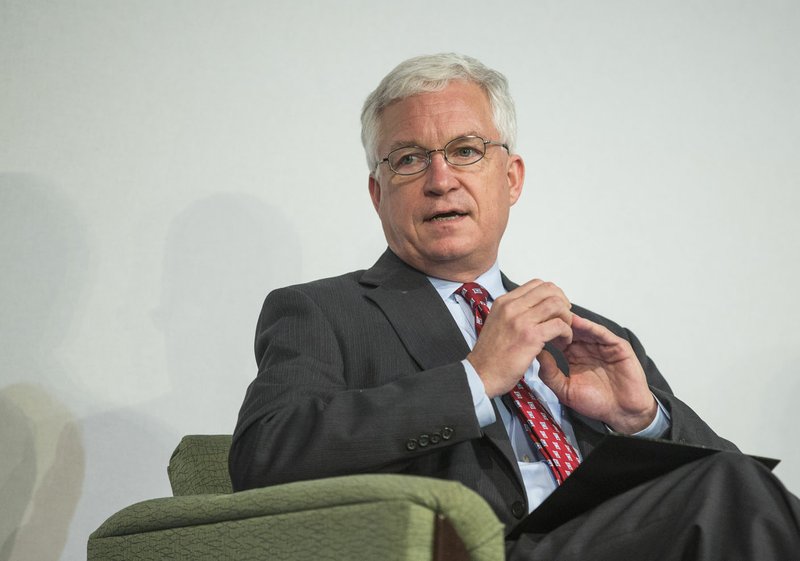 NWA Democrat-Gazette/BEN GOFF @NWABENGOFF Dr. Joe Thompson with the Univeristy of Arkansas for Medical Sciences moderates Wednesday a panel discussion with doctors about the dangers of vaping during the Youth Vaping Summit at Bentonville High School.

BENTONVILLE -- Police Cpl. John Loncarevic has observed a rapid increase in the number of teens vaping during his five years as a school resource officer at Bentonville High School.

When he talks to them, he often finds they have no clue what they're putting in their bodies or vaping is hazardous to their health, he said.

As of Oct. 1, 1,080 lung injury cases associated with e-cigarette use, or vaping, have been reported to the Centers for Disease Control from 48 states and one U.S. territory. Eighteen deaths have been confirmed in 15 states. The median age of deceased patients was 49.5 years and ranged from 27-71 years. About 80% of patients are younger than 35 years old, 16% are younger than 18 and 21% are 18 to 20 years old.

Loncarevic participated in a panel discussion at the school Wednesday during the Youth Vaping Summit, the second of two summits this week organized by Arkansas Attorney General Leslie Rutledge as part of her "Gen Z Nic Free" campaign.

Rutledge, speaking during Wednesday's summit, said school administrators have told her about the challenges they face with teen and pre-teen use of e-cigarettes. It's an epidemic nobody saw coming, she said.

"It has become a distraction, but more importantly a danger for Arkansas students," she said.

The biggest hurdle to solving the problem is ignorance among not only kids, but also teachers and parents, she said.

"We are working against years of misinformation and misleading advertising regarding e-cigarettes from the manufacturers, who have been telling people that it's so much safer than traditional cigarettes," Rutledge said. "When in fact, we don't know if it's safe at all."

A study published Monday by New York University researchers was the first to link vaping to cancer. It showed e-cigarette vapor caused lung cancer in 22.5% of mice tested; in addition, 57.5% of the mice in the study had bladders showing rapid cell growth, an early sign of cancer.

Loncarevic said when Bentonville students are caught vaping or with vaping devices, their parents generally are supportive of the school's disciplinary measures. Some parents, however, say they bought the vaping product for their child and are upset when they learn they can't get it back, he said.

The products are commonly disguised as ordinary household items such as pens and USB sticks.

Manufacturers must be prevented from targeting youth with flavors such as bubble gum and cotton candy, Johnson said. He added legislators should support education on vaping at an early age. He recalled being in elementary school and learning about the dangers of cigarettes when his teacher brought in a sample of a smoker's lung that was all black.

"The vision and image of that as a fifth-grader really stuck in my head and to this day, when I see someone smoking, I think about that image," he said. "We need to let our children understand that this is dangerous. This can kill you."

Dr. Joe Thompson, president of the Arkansas Center for Health Improvement, moderated another panel discussion with three other doctors. Their hourlong discussion focused on health implications of vaping.

"I think we're here in part because we're starting to see the tip of the iceberg on the health effects," Thompson said.

He asked Sara Reed, a pediatrician at Arkansas Children's Hospital Northwest in Springdale, if e-cigarettes are safer than smoking cigarettes. The answer is no, Reed said.

"In fact, one e-cigarette, one juice that they put in the e-cigarette, can contain as much nicotine as a whole pack of cigarettes," Reed said.

A person's brain develops until they are 25 years old, so teens who are vaping are introducing dangerous substances to their system at a key time in their brain development, Reed said.

Long-term issues associated with nicotine use include memory loss, diminished impulse control and a greater likelihood of addiction to other substances, she said.

Greg Dupuis, medical director and chief of emergency medicine at Arkansas Children's Northwest, said they are seeing more teens whose respiratory illness, such as asthma, has been exacerbated by vaping.

"When you ask them or ask their parents, they say, 'Well, we didn't know this was bad. We thought this was better than cigarettes,' " Dupuis said.

Thompson asked panelists what signs of vaping parents should look for in their kids.

"I've had parents tell me they keep catching an aroma that smells very nice, but they can't figure out where it's coming from," Reed said.

Teens may exhibit behavioral changes or may start hanging out with a different crowd or isolating themselves more, she said.

Rutledge's office has sent a letter to eBay asking the e-commerce corporation to remove all electronic nicotine devices and products from its platform. Her office also sent letters to 100 online e-cigarette retailers informing them it's illegal to ship products with tobacco into Arkansas.