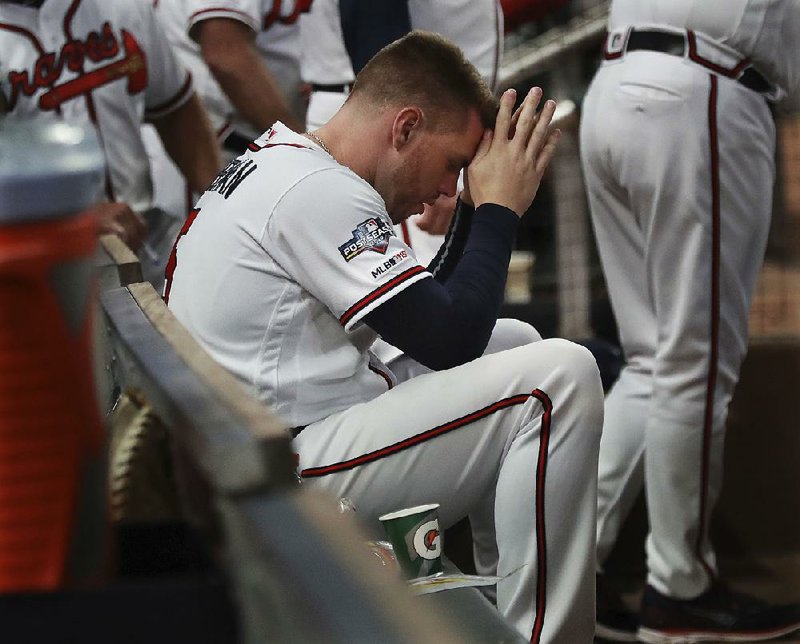 Freddie Freeman of the Atlanta Braves sits in the dugout during the ninth inning of the Braves’ 13-1 loss to the St. Louis Cardinals on Wednesday during Game 5 of their National League division series. The Cardinals scored 10 runs in the first inning, a postseason record.

ATLANTA -- The St. Louis Cardinals turned the diamond into a giant pinball machine, dinging hits all over SunTrust Park.

By the time the Atlanta Braves finally got the third out, it was the most productive first inning in postseason history.

The Cardinals scored 10 runs their first time up and dealt Atlanta another playoff heartbreak, routing the Braves 13-1 in Game 5 of the National League division series Wednesday.

"That was crazy," said Marcell Ozuna, one of five players who batted twice in the outburst. "We got a good opportunity, and we took it."

Before many fans had reached their seats, the Cardinals already were booking their plans for the NL Championship Series, where they will face the Los Angeles Dodgers in a best-of-seven set beginning Friday. It will be St. Louis' first NLCS trip since 2014.

"We know we can beat anyone at this point," Kolten Wong said.

For the Braves, it might take a while to get over this debacle.

After pitching seven scoreless innings in a Game 2 victory, Mike Foltynewicz retired only one hitter before getting yanked. First baseman Freddie Freeman booted a potential double-play ball that might have limited the damage. The Cardinals scored their final run of the inning on a strikeout -- a wild pitch in the dirt that skipped away from catcher Brian McCann.

"We just strung together a bunch of great at-bats," Wong said.

It was Atlanta's 10th consecutive postseason round loss since its last victory 18 years ago, tying the ignominious mark set by the Chicago Cubs between 1908 and 2003.

Carrying on the tradition that started at Atlanta-Fulton County Stadium, moved on to Turner Field and is now becoming an annual occurrence at SunTrust Park, it was a visiting team that got to celebrate in Atlanta.

The Cardinals broke out T-shirts and caps, hopped around in the middle of the infield and gathered on the pitcher's mound for a team portrait with the center-field video board looming as a backdrop.

"It was more of a shock than anything," said Josh Donaldson, whose home run provided the lone Atlanta run. "You don't expect something like that to happen, especially with how well we played all season."

The Cardinals batted around and got more than halfway through their order a second time before the Braves even came to the plate.

Tommy Edman, Dexter Fowler and Wong all had two-run doubles as St. Louis equaled the highest-scoring inning in postseason history, a record set by the Philadelphia Athletics against the Chicago Cubs in the 1929 World Series. It was matched by the Detroit Tigers (1968 World Series vs. St. Louis), the Anaheim Angels (2002 ALCS vs. Minnesota) and now the 2019 Cardinals.

No team had ever scored 10 runs in the first inning of a postseason game. It was the first time the Braves franchise has allowed that many opening-inning runs in any game since they were in Boston on July 2, 1925, against the Brooklyn Robins.

The Cardinals made several changes after their 10-spot in what might've been the first set of defensive moves ever made by a team before its opponent had batted. There was no need to worry about any more offense with budding ace Jack Flaherty on the mound, coming off one of the great second halves by a starting pitcher in baseball history.

"We took the crowd out of it," Fowler said. "We knew Folty would try to get ahead of us. We were trying to get some good pitches to hit. It was a little easier to see the ball today."

Manager Mike Shildt let the 23-year-old Flaherty throw 104 pitches over six innings, surrendering four hits for the first postseason victory of his blossoming career. Flaherty loaded the bases in the fifth after drilling Ronald Acuna with a fastball, but he induced an inning-ending groundout from Freeman.

Foltynewicz, who didn't walk anyone in Game 2, started ominously with a walk to Fowler. Wong followed with a sacrifice bunt -- the only hitter Foltynewicz retired.

Paul Goldschmidt reached on an infield hit, and the crowd stirred nervously when Marcell Ozuna lined another single to right to bring home the first run.

Then, the play that essentially finished off the Braves. Yadier Molina drilled a one-hopper to first that Freeman likely would've turned into an inning-ending double play if he made the scoop. Instead, everyone was safe when the ball deflected off his glove and rolled slowly toward second base to leave the bases loaded.

"This one is on me," Freeman said.

Matt Carpenter walked to force in a run, and Edman ripped a two-run double to make it 4-0. After Paul DeJong was handed an intentional walk to reload the bases, Atlanta Manager Brian Snitker emerged from the dugout to call in 17-game winner Max Fried.

Flaherty drew another bases-loaded walk, and Fowler lined a two-run double down the left-field line to make it 7-0. Wong followed with yet another two-run double, pushing the score to 9-0.

Wong tagged and hustled to third on Goldschmidt's lineout to right. Ozuna appeared to end the inning when he flailed at a ball in the dirt for strike three, but McCann couldn't corral the wild pitch. The catcher fell down picking the ball up near the backstop and threw late to first from his backside while Wong sped home.

McCann announced after the game that he's retiring. 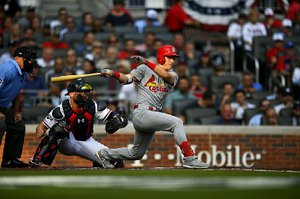 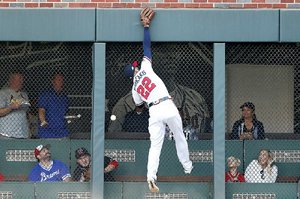 Photo by AP/JOHN BAZEMORE
Atlanta outfielder Nick Markakis misses catching St. Louis outfi elder Tommy Edman’s triple at the wall Wednesday during the third inning of the Braves’ 13-1 loss to the Cardinals in Game 5 of their National League division series at SunTrust Park in Atlanta.