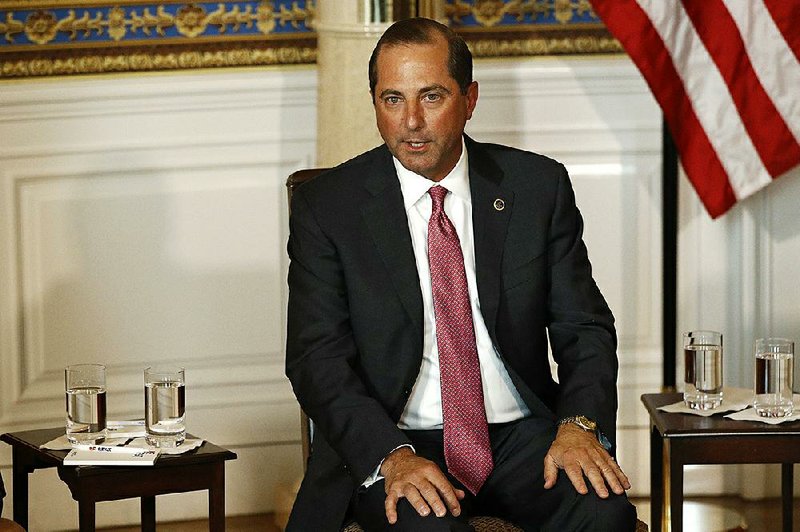 “Our goal here is for patients to have a sense of ease in health care, where they know providers have the right incentive to move them through the system,” Health and Human Services Secretary Alex Azar said Wednesday.

President Donald Trump's administration announced Wednesday that it will move to ease rules designed three decades ago to prevent fraud and bribery by doctors, but which now can hinder their efforts to improve patient care.

In a move long sought by doctors and hospitals, Health and Human Services Secretary Alex Azar proposed updates to two long-standing statutes banning physicians from referring patients for other medical services if it would financially benefit the doctors. Officials say the laws are still important but were designed with the 1990s medical system in mind -- not today's system, where health providers are increasingly being paid for the quality of their care and how well they coordinate a patient's care with other providers.

Azar and other top health officials said they plan to loosen a heavy web of regulations on doctors and hospitals resulting from the federal "Stark" law and the Anti-Kickback Statute. These regulations are getting in the way of health providers trying to work more closely together to provide better, more coordinated care for Medicare patients, the officials said. Health providers currently get paid for each test they order or service they perform.

"Our goal here is for patients to have a sense of ease in health care, where they know providers have the right incentive to move them through the system," Azar said.

The proposed rules are highly technical, but they underscore a broader effort by the Trump administration to improve how health providers in the United States are paid for medical care. This was a top priority for President Barack Obama's administration, and Azar has stressed he is also keeping a payment overhaul at the top of his to-do list.

It's also an effort with strong bipartisan support at a time when the administration is seen as overtly political when it comes to health care policy. A federal appeals court is expected to rule on a lawsuit trying to dismantle Obama's health care law, the Patient Protection and Affordable Care Act. Democrat-led states have defended the law.

Administration officials are trying to draw attention to other steps they're taking to improve health care in the United States, including changing Medicare payments for dialysis patients and boosting popular private plans that provide Medicare benefits.

"The president and his administration are committed to fixing broken systems that don't work for the American people," said Joe Grogan, director of the White House Domestic Policy Council.

The proposals the administration is releasing apply only to the Medicare program. But, like all of Medicare policy, they would likely have ripple effects throughout the health care system.

It's been 30 years since Congress passed the Stark law. Its aim was to halt self-serving behavior by physicians by banning them from referring patients for tests, specialty care or other procedures that could financially benefit the doctors or their families.

This practice of self-referral can result in unnecessary testing and procedures for patients, raise overall health care spending and compromise the trust patients place in their doctors to provide them with unbiased advice.

But things have changed since then. Many doctors and hospitals are entering into special financial arrangements where they get rewarded for working together and cutting down on unnecessary procedures. In this environment, strict Stark and antitrust regulations are viewed as unnecessary, since the providers in these arrangements don't get extra compensation anymore for providing extra services.

"It's definitely time for an update," said Mark McClellan, who led the Centers for Medicare and Medicaid Services under President George W. Bush.

Azar said the regulations -- which won't be finalized until after a public comment period -- will create new exemptions from these laws for doctors and hospitals being paid based on quality, not quantity. He said the regulations will also update existing exemptions and clarify the rules "so providers can spend less time and money on compliance."

Centers for Medicare and Medicaid Services Administrator Seema Verma said the changes will encourage more doctors and hospitals to participate in Medicare's experiments to improve payments.

"Unfortunately, the looming threat of liability under the Stark law has discouraged many providers from entering into value-based arrangements in the first place," she said. "Times have changed, and so must our approach."