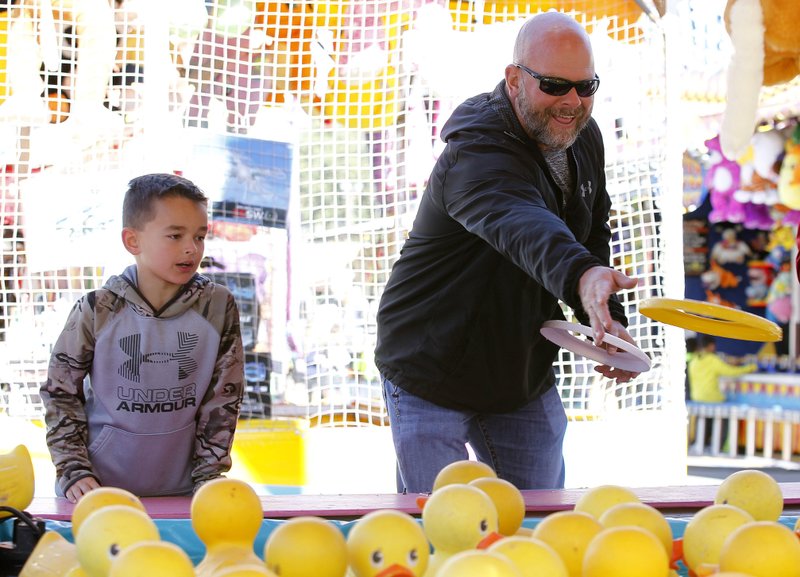 Zach Branch of Rison (top left) tries to toss a ring around a duck while his son, Bryant, waits for the prize; during last year's well-attended Arkansas State Fair. Democrat-Gazette file photo/Thomas Metthe

The 2019 Arkansas State Fair is celebrating some old, welcoming some new and preparing for what promises to be 10 days of thrills, tunes and — of course — food.

People will notice a bit of the new right from the start. Five years after the old main gate was lost in the Roosevelt Road bridge expansion, they've finally built a new gate to welcome patrons.

Doug White, the fair's new general manager, said one of the biggest changes this year is a return to the traditional schedule. In recent years, the fair has started on Thursday; this year it'll go back to a Friday opener.

"The Thursday was tough, logistically, to get our carnival and midway," White says.

North American Midway Entertainment, which has provided the carnival and games for the past few years, has to break down its midway in the previous city, transport, reassemble and pass safety tests in time for the opening. A Sunday to Thursday turnaround was pushing it.

"Miraculously, by Friday, they'll have 60 rides set up on the midway," he says. "It buys them a day."

Besides, he adds, "There's such a historical aspect to the fair. I don't think people got used to the Thursday opening." 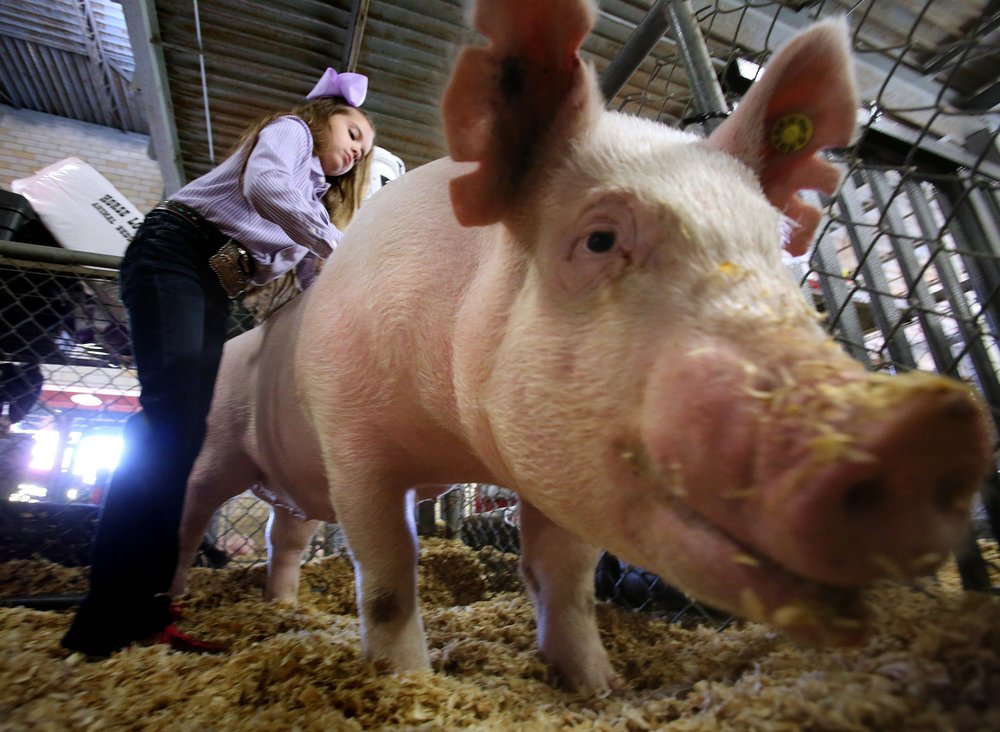 Landry Mitchell of Magnolia gets her pig ready for the spotlight at the 2018 Arkansas State Fair. Democrat-Gazette file photo/Thomas Metthe

While the starting date may be a return to the old days, there's one big departure: the rodeo.

"The rodeo was a big feature for us," White says. "But the reality is, the quality of the rodeo that came here had lessened over the years. They had a change of ownership. Attendance had gone down five consecutive years."

So, instead of the rodeo, there will be a monster truck show called the Monster Mash at 5 p.m. Oct. 19 in Barton Coliseum with a pre-show pit party and a chance to meet the drivers. 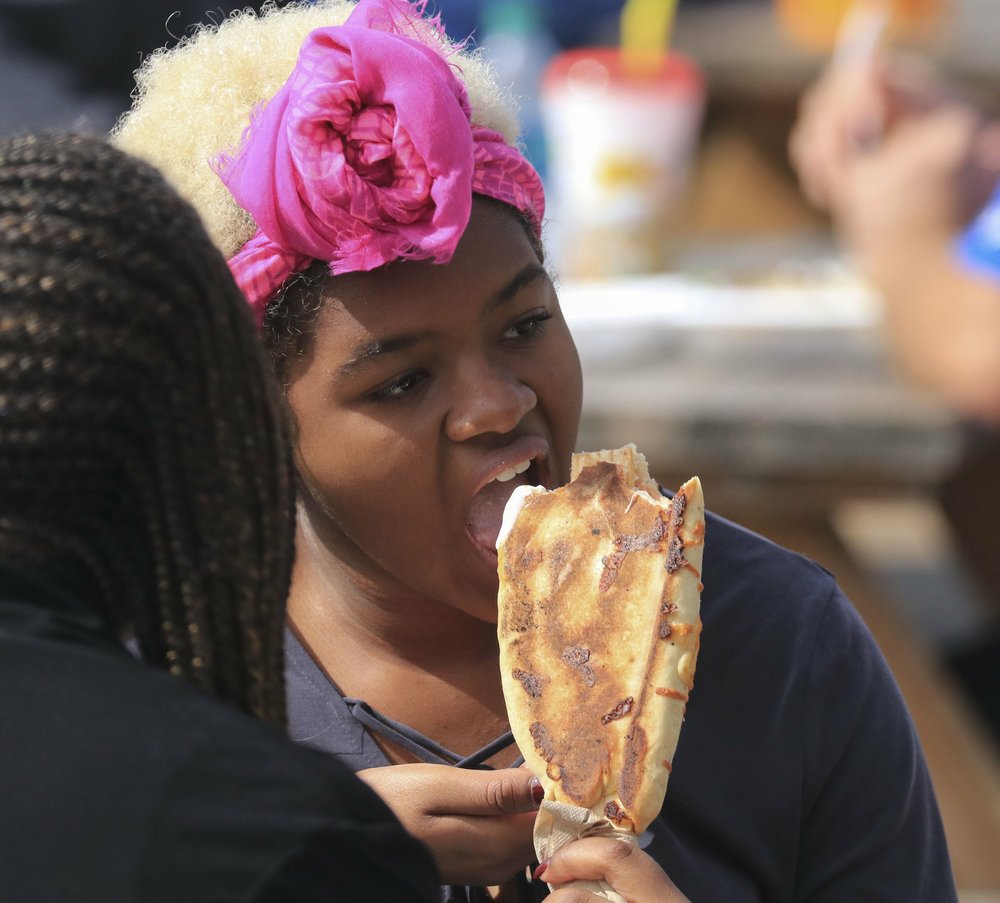 Alexis Broadnax eats pizza on a stick at last year's Arkansas State Fair. This year's food offerings include a lobster roll, a bit fancier than pizza on a stick. Democrat-Gazette file photo/Staton Briedenthal

But when it comes to the fair, the big talk is about the food: what's being fried, put on a stick or marinated in Kool-Aid.

"When we've done our research, without exception, the No. 1 reason people come is the food," White says.

And there will be plenty of food: 53 food and beverage vendors throughout the fairgrounds.

Of course, there will be the usual traditional favorites: corn dogs, turkey legs, cotton candy, funnel cakes. And the returning oddities: Koolickles and pizza on a stick. But as with every year, this fair will have some new delicacies for people to try.

Fairgoers can attempt to keep all that food down while trying new rides such as the Space Roller, the Star Dancer and Zero Gravity, which features a very big vertical drop.

The lineup for fair headliners is a wide mix of bands and styles, starting with Rick Springfield, who White calls "the best opening act we've ever had. He was here three years ago and put on a great show."

In setting the lineup, the fair organizers have tried something a little different. Every headliner will have an opening act, mostly made up of Arkansas talent. General admission is free but deck seating is $25 per concert.

The livestock portion of the fair, also a huge draw, will be much the same as in the past, although they've made some changes to make the competitions more user-friendly for competitors. White adds that the petting zoo will return.

This year's fair will continue the "hugely popular" Lunchtime at the Fair, with free admission 11 a.m.-1 p.m. Monday-Friday.

Gone, though, will be the shuttle service from downtown Little Rock. Instead, people are encouraged to park on the grounds, which will be secured by perimeter fencing and more than 200 law enforcement officers.

The grounds' south lot, which in the past has frequently had to be closed due to weather, has been graveled and graded so it can be used rain or shine.

"We've got available, safe, secure parking for up to 1,000 cars in the south lot," White says. "There's really no reason for anyone to park off-premises."

This rundown of highlights doesn't even go into the food and creative arts competitions, activities like the Swine Racers and Sea Lion Splash, the Baggo tournament and a long list of promotions.

With a return to the 10-day schedule, this year's state fair is packed with activity.