In face of wind, power cut to thousands in California 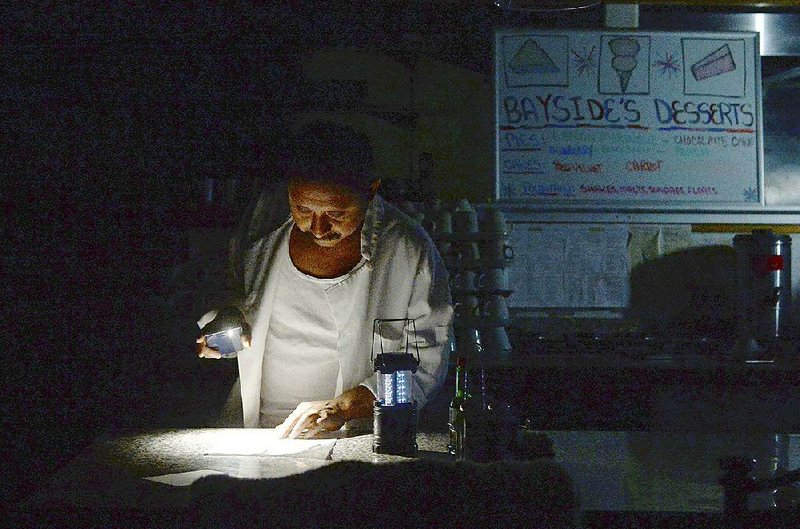 Carlos Lama uses an LED lamp and his phone Wednesday to work at the counter of the Bayside Cafe in Sausalito, Calif., after power was cut to the area as a precaution against wildfires.

LOS ANGELES — Large areas of Northern California awoke to darkness Wednesday as Pacific Gas & Electric began a plan to shut off power to about 800,000 customers in a bid to avoid wildfires sparked by wind-damaged electrical equipment.

The first power cutoffs, affecting about 513,000 customers, began shortly after midnight in several counties around Sacramento, including Placer and Yuba. As strengthening winds continued to roll out into the early morning hours, millions of Californians eventually will be left in the dark.

By 12:30 a.m. Wednesday, power had been cut to large portions of wine country, including Napa and Sonoma valleys. Portions of Marin County just north of San Francisco lost power next. Minutes later, the utility cut service in El Dorado County and sections of the upper Sacramento Valley. By 5 a.m., the cutoffs had extended to Humboldt County to the north, Marin County to the south and as far as Nevada County to the east, according to a map provided by the utility.

The second phase of the shut-off was expected to occur in areas around Silicon Valley and the East San Francisco Bay. About 234,000 customers in Alameda, Alpine, Contra Costa, Mariposa, San Joaquin, San Mateo and Santa Clara counties also were expected to lose power.

[Video not showing up above? Click here to watch » https://www.youtube.com/watch?v=qWWG7uIlvwk]

The utility said Wednesday that it also was considering shutting off power to about 42,000 customers in the southernmost portion of Pacific Gas & Electric’s service area, but specific sites have not been determined.

On Tuesday, Southern California Edison announced that it also was considering preventive power cutoffs. The utility said that given the anticipated strong Santa Ana winds, power could be cut off to more than 106,000 customers in parts of eight Southern California counties, including Los Angeles County.

The blackouts are expected to ultimately affect 34 counties in central and Northern California, more than half of all counties in the state.

It marks the largest power shutdown to date as utilities across California attempt to reduce wildfire risks in the face of strong winds. Equipment malfunctions have been tied to some of the state’s most destructive and deadly fires, including last year’s Camp fire, which devastated the town of Paradise, killing 85 people, and the 2017 wine country blazes.

“The safety of our customers and the communities we serve is our most important responsibility, which is why PG&E has decided to turn power off to customers during this widespread, severe wind event. We understand the effects this event will have on our customers and appreciate the public’s patience as we do what is necessary to keep our communities safe and reduce the risk of wildfire,” said Michael Lewis, the utility’s senior vice president of electric operations.

Based on the latest forecasts, the utility says it expects high winds to last through midday today, with peak winds reaching up to 70 mph through this morning. Once the fire weather subsides, Pacific Gas & Electric will inspect and test the grid with on-site crews and electronically before restoring service. That could take up to five days, a company official said.

Gallery: PG&E cuts off power to more than half a million customers in Northern California to prevent wildfires

The power shut-offs have generated backlash, with some residents saying they create a whole new set of dangers as they try to watch for news about fires. There is also concern about people in ill health who rely on medical equipment that must be plugged in.

“I think this is a tacit admission that they recognize their liability for huge wildfires we’ve had and that their grid has a lot of deficiencies,” James Moore, an attorney from Auburn, said of the widespread blackout.

Moore realized power had been cut off when his breathing-aid machine stopped working overnight on a business trip to Sonoma County. Moore and his wife, Kristen, tried to prepare as best they could with limited notice, filling cars with gas and buying ice to keep refrigerated items cold, he said.

Their home has electric appliances, so cooking will be limited to a propane grill they use for camping. The power cutoff also means the couple, whose home is equipped with an electric pump that pulls water from the street to the property, will not have running water.

“I wish they would have been more transparent in informing people earlier of their plan to do these kind of power shut-offs,” Moore said. “I recognize the weather is not something they can predict very far in the future, but the fact they’re turning off power in 34 counties is a humongous inconvenience, to say the least.”

Before the lights went out in the East Bay town of Moraga, cars were lined up at gas stations and customers filled carts at the town’s only supermarket with bags of ice, canned goods, loaves of bread, breakfast cereal and water.

Lines were also long at pharmacies and hardware stores, where emergency supplies were running low.

“Do you have any lanterns?” Elma Lear asked at Moraga Hardware and Lumber. “Or candles?”

The store was out of both and also had run out of batteries and coolers — even Yeti coolers that cost as much as $400, owner Bill Snider said.

On Tuesday, the store sold 500 flashlights. Other high-demand items were extension cords, propane tanks for barbecues and butane for camping stoves. Generators were almost impossible to find.

Lear, who had stocked up on nonperishable food and cash, and filled her gas tank, was directed to a home decor shop nearby where she had to fork over $40 for long-lasting beeswax candles.

“I’m going to bite the bullet,” she said.

Gov. Gavin Newsom said people should be angry by the utility’s move.

“No one is satisfied with this, no one is happy with this,” he said Tuesday.

Assembly Republican leader Marie Waldron said the utility’s announcement is a sign of how far the state has fallen behind in efforts to prevent catastrophic wildfires.

“This is the frustrating result of decades of forest mismanagement and aging energy infrastructure,” Waldron said. “These shut-offs highlight the need to invest in vegetation management, update our energy grid and help Californians harden their homes against wildfires.”

The state Office of Emergency Services has been in contact with the emergency workers managing the effect of power shut-offs, according to spokesman Brian Ferguson.

“It’s clear that this is a complex and rapidly evolving challenge,” Ferguson said. “We continue to work with local and state law enforcement and local community leaders to minimize the impact of these power outages and keep residents safe.”

The shut-off also resulted in the cancellation of classes at schools across Northern California, including at large college campuses like the University of California, Berkeley.

The California State University system had to cancel classes at Sonoma State and Humboldt State, which together have about 17,000 students, according to spokesman Michael Uhlenkamp.

All campuses in the El Dorado Union High School District in the Sierra Foothills east of Sacramento also were closed Wednesday.

State Sen. Scott Wiener said the state is acting to make sure similar shut-offs do not become common in the future.

“People rely on electricity for their medicine, their food and their livelihood. This is a completely unacceptable state of affairs. While targeted blackouts can help prevent wildfires, we can’t let PG&E normalize these blackouts,” he said.

Once the fire weather subsides, Pacific Gas & Electric will inspect and test the grid with on-site crews and electronically before restoring service. That could take up to five days, a company official said. 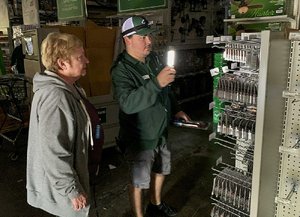 Photo by AP/TERRY CHEA
Danny Molles helps a customer find batteries Wednesday at the family owned Friedman’s Home Improvement store in the California wine country town of Sonoma, where the electricity was cut off earlier in the day. More photos are available at arkansasonline.com/1010power/

A map showing the California outages.

Print Headline: In face of wind, power cut to thousands in California