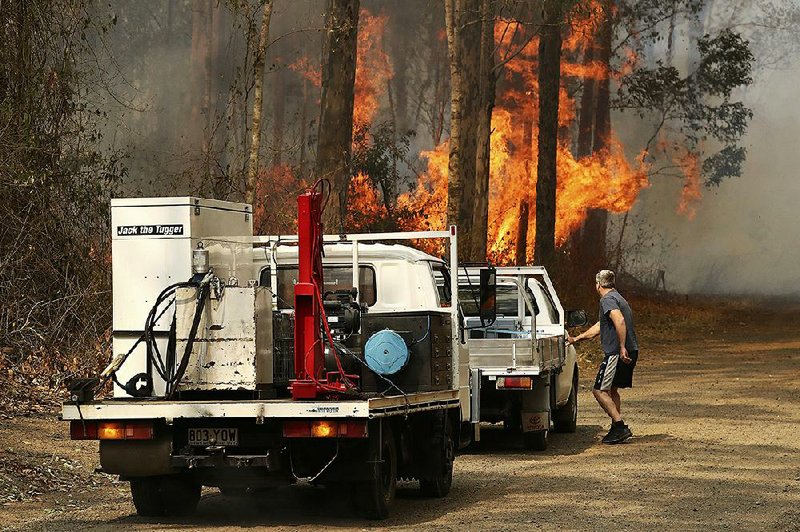 A man keeps an eye on a bush fire burning out of control Wednesday near Busbys Flat, Australia.

PERTH, Australia -- About 500 firefighters were battling out-of-control wildfires in eastern Australia that have destroyed up to 30 homes.

More than 380 square miles have burned with the small village of Rappville, population 250, among the worst affected. About 50 people sheltered in a school overnight.

New South Wales Rural Fire Service deputy commissioner Rob Rogers said some people had been taken to hospitals with minor burns and breathing difficulties. The number of injures wasn't given, and the extent of the fire damage was still to be determined.

Prime Minister Scott Morrison said it was a dangerous situation. "Fortunately, there's been no loss of life, which is something always to be thankful for, but there are remaining very serious threats today," he said.

Arson was suspected of causing the Rappville fire that started Friday night. Fire service superintendent Michael Brett said "suspicious activity" had been identified in the area.

SUBIC, Philippines -- More than 2,000 U.S. and Philippine military personnel, along with a small contingent of Japanese forces, began annual combat exercises Wednesday aimed at responding rapidly to crises and natural disasters and underscoring their commitment to keep the region "free and open."

The 10-day drills, which include amphibious assault and live-fire exercises, opened at Subic Freeport, a former U.S. naval base northwest of Manila. They will include humanitarian work.

China has often branded military exercises involving the U.S. and its allies, especially in or near the disputed South China Sea, as a threat to its security interests. U.S. and Philippine officials said the exercises aim to address terrorism, security and humanitarian concerns during natural disasters.

"These activities represent an increase in military capability and a commitment to a free and open Indo-Pacific region and demonstrate the ability to forward deploy forces in the event of a crisis or natural disaster," the U.S. Embassy in Manila said.

Philippine marines spokesman Capt. Felix Serapio said about 1,400 U.S. Marines and 600 Philippine counterparts are participating in the exercises, called "Cooperation of warriors of the sea."

About 100 members of Japan's military will participate in drills using amphibious assault vehicles and will train alongside U.S. and Philippine forces in providing humanitarian aid and disaster-response work, the American Embassy said.

PESHAWAR, Pakistan -- A Pakistani court has given the prosecution two weeks to prepare a response to the appeal by a convicted Pakistani physician who ran a fake vaccination campaign in the country to help the CIA confirm Osama bin Laden's whereabouts.

Wednesday's adjournment was the first after a petition from Dr. Shakil Afridi, who was sentenced to 33 years in 2012 by a tribal court on charges of funding a domestic militant group and treating its members.

That case is separate from the doctor's alleged involvement with the CIA, for which Afridi was never formally charged.

Pakistan was angry over being kept in the dark ahead of the May 2011 Navy SEALs operation that killed the al-Qaida mastermind.

Washington has demanded Afridi's release but Islamabad has resisted the demand, saying he violated Pakistani law.

The Central African nation also is battling an Ebola outbreak that has killed about half that number since August 2018.

Since January, more than 200,000 cases of measles have been reported across Congo, UNICEF said. More than 140,000 involve children under 5 years old, who also make up nearly 90% of deaths.

"We're facing this alarming situation because millions of Congolese children miss out on routine immunization and lack access to health care when they fall sick," said the UNICEF country representative, Edouard Beigbeder. "On top of that, a weak health system, insecurity, community mistrust of vaccines and vaccinators and logistical challenges all contribute to a huge number of unvaccinated children at risk of contracting the disease."

Health officials are facing many of the same challenges in the Ebola outbreak in eastern Congo that has killed more than 2,000 people. Numerous armed groups have been fighting over the mineral-rich land for decades and threatening residents. The insecurity has led to mistrust of authorities, including health workers.