More of Arkansas' schools graded A in year evaluation

A total of 169 of Arkansas' 1,026 school campuses earned A grades from the state for the 2018-19 school year, an increase of 17 over the previous year, state education leaders announced Wednesday.

Fewer schools earned F's for the year, 38 compared with the previous year's 44.

The state's annual release of the A-to-F school letter grades and accompanying "ESSA Index Scores," which are numerical scores, come in advance of today's 10 a.m. Arkansas Board of Education meeting to decide on the future management of the eight F schools in the state-controlled Little Rock School District. The portion on Little Rock schools begins at 1 p.m.

The Education Board voted last month -- before knowing which, if any, Little Rock schools might receive F grades -- to place F schools under "different leadership" than the rest of the capital city district. But it will do so in partnership with the district. Little Rock schools receiving grades of D or better will be returned to the management of a school board to be elected in November 2020, according to the Education Board's framework plan.

Search by school or district below:

Wednesday's release of the letter and numerical scores dealt with all Arkansas schools, including charter schools. The top-scoring schools and the schools with the greatest improvements are now in line for cash awards from the state. Districts with one or more low-performing schools will receive varying levels of support from the state. Those districts are at some risk of state takeover.

There are fewer schools with B and C grades for 2019 compared with 2018 but slightly more D schools, according to the school accountability data compiled by the Arkansas Division of Elementary and Secondary Education in compliance with state and federal laws.

The A-to-F letter grades are based on each school's federal ESSA Index Score, which is a numerical score of 1 to 100 that is calculated using numerous factors, including the results from the spring 2019 ACT Aspire tests given in grades three through 10 and improvement on that test over time.

ESSA stands for Every Student Succeeds Act of 2015.

Other factors in the calculations include high school graduation rates and college entrance exam results if applicable to a school, progress by students who are English language learners and indicators of school quality and student success. Those quality and success indicators include student attendance, science achievement and gains, numbers of students reading at their grade level, and community service by students.

"These results indicate we are making progress toward our goals for student learning," Arkansas Education Secretary Johnny Key said in releasing the data. "The reports reflect growth and improvement in some areas, while also identifying areas that need continued attention."

Key said the annual report was publicly released earlier than in the past, which will give teachers and others the opportunity to evaluate their information and make adjustments that will help students and schools show gains in the 2019-20 school year.

The letter grades drew both fire and support Wednesday.

Sen. Joyce Elliott, D-Little Rock, joined by other members of the Arkansas Legislative Black Caucus, said at a news conference that letter grades are unhelpful, based on "junk science" and are used by advocates of privatizing schools to undermine public education.

"We can find a way to label anything," said Elliott, a retired English teacher. "What people don't realize is what happens to a school when it gets an F label. It means that Realtors begin to talk about our neighborhoods as not worthy of living in. It means that when people move to our city the Realtors are careful to tell them not to move into our neighborhoods because we have bad schools -- all based on science that is really questionable.

"It means, most importantly, that this label gets tattooed onto the brains of the children who go to those schools," she said. "If you think this doesn't hurt these kids, you need to think about what it would mean to you if you had to wear a scarlet 'F' on you every day."

The Arkansas Policy Foundation, on the other hand, "applauds the use of letter grades to establish district and school academic ratings and triggers for acclaim or sanctions," Executive Director Greg Kaza said Wednesday.

The Policy Foundation proposed such a system in 1998 using the categories "successful," "competent," "weak," "alert," and "distress," he said. And between 2006 and 2009 -- in the absence of a state letter grade system -- the foundation published four annual studies that used letter grades (A, B, C, D, F) to assess progress or lack thereof in Arkansas public schools. State policymakers later enacted a letter grade system.

"Proposals to end or restrict the current letter grade system are an attempt to 'turn back the clock' on the limited education reform that has occurred since our original recommendation," Kaza said.

The 2019 letter grades will have an immediate impact on the Little Rock district.

Six Little Rock schools earned A's, three had B's, eight had C's and 15 had D's. Eight of the district's 40 campuses earned F-letter grades from the state for the 2018-19 school year, leaving the district short of meeting state-set criteria for exiting state control within five years -- as required by state law to avoid annexation, consolidation or reconstitution of the district.

The state Education Board has adopted a framework for reconstituting the district that calls for returning management of the district with some limits to a locally elected board, and establishing three categories of schools -- those with D grades or better, those that are being reconfigured as the result of an earlier plan for closing and repurposing buildings, and the F schools. Applying the framework to the district is on the agenda for the Education Board's afternoon session, which is open to the public and also will be livestreamed at this link:

The Education Board had voted in January 2015 to assume authority over the district, dismissing its seven-member School Board and placing the superintendent under state direction largely because six of the then-48 schools were labeled as being in academic distress because of low test scores.

Mike Poore, the Little Rock district's superintendent, has said that a majority of Little Rock schools showed gains over the 2017-18 ESSA Index Scores and that the district's teachers and administrators with the state intervention are on the right track.

Elsewhere in Pulaski County, the Pulaski County Special School District had two A schools -- Baker and Chenal elementaries -- along with five B schools, 11 C schools and six Ds.

The North Little Rock School District had one F school -- Seventh Street Elementary -- and one A school -- Crestwood Elementary among its 12 campuses.

Jacksonville/North Pulaski had two F schools, Warren Dupree and Murrell Taylor elementaries; three D's and two C campuses. In anticipation of the grades, Jacksonville School Board member Ron McDaniel earlier this week asked for a work session in which each campus principal will make presentations on efforts to raise achievement.

Elsewhere in the state, the Conway School District had six A schools among its 15 campuses, and one C. All the rest were B's.

The 11 schools in the Bryant School District had all A's and B's.

The 21-campus Bentonville School District had 17 A schools and four B schools.

The Springdale School District's 29 campuses had seven A's and nothing lower than a C.

The Jonesboro School District had one F -- at the Microsociety Magnet Elementary -- and no A's among its nine campuses.

The Pine Bluff School District, which was taken over by the state in 2018 for academics and financial problems, has five F-graded schools -- including its high school -- and two D's.

The El Dorado district has one A school, four C schools and two D schools for the 2018-19 school year, an improvement over the previous year.

The state reported that 557 schools improved their overall ESSA Index Score in 2019 over 2018. Fifty-five schools did that by more than 5 points. Topping that category was the 290-student Strong-Huttig kindergarten-through-12th-grade school, which raised its score by 15.97 points to 60.21 and going from an F to a D.

Kimberly Thomas, the district's new superintendent, attributed the growth to hard work by dedicated teachers who were willing to practice what they had learned at trainings in literacy and math instruction.

Kingston High School in the Jasper School District improved its ESSA Index Score by 9.95 points, moving the letter grade from a D to a B. Three more of the Jasper campuses also improved a letter grade.

"I feel confident we'll continue to grow," Assistant Superintendent Candra Brasel said."We're not where we want to be yet."

Jasper Superintendent Jeff Cantrell said teachers at each of the district's six schools were dissatisfied with scores last year and were motivated to improve. That effort has included flexible scheduling that provides teachers and students with time in the school day or week to individualize instruction for students who need some extra help.

The Mississippi River Delta's Portland Elementary School in the Hamburg School District improved its score by 9.03 points, to 79.31, going from a C to an A letter grade.

"We were trying for a B and got an A," said a delighted Cristy West, the 14-year principal and former teacher at the 139-pupil prekindergarten-through-fifth-grade school said Wednesday.

Both West and Hamburg Superintendent Tracy Streeter attributed the success not only to the hard work of staff and students but also to the long consistent use of the Direct Instruction program of teaching reading -- a scripted program that was more commonly used in the 1990s.

"It's unconventional," Streeter said. "Who uses a program for more than 20 years?" she said and laughed.

West said the school has supplemented Direct Instruction with some of the lessons in phonics and other components of reading science that are being advocated by the Arkansas Department of Education. Additionally, West said the school is able to have its teachers follow pupils through the upper grades. A third-grader's reading and math teachers will be that pupil's teachers in fourth grade and then in fifth grade, enabling the teachers to have great familiarity with the child's academic needs.

A popular component of the ESSA Index Score system is that schools receive credit in the calculation for students who make achievement gains on the ACT Aspire that at least match whatever gains they made in the previous year. A value added growth score of 80 or better indicates that desired growth over a year. A total of 576 schools earned that 80 this year, according to the state agency. 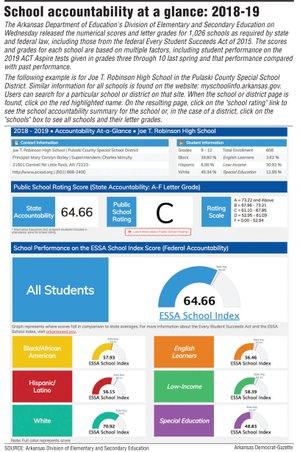 Photo by Nikki Dawes
School accountability at a glance: 2018-19 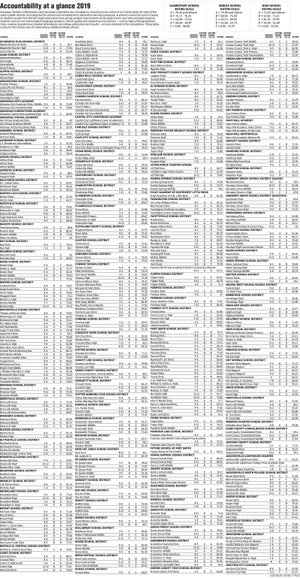 Accountability at a glance 2019 page 1 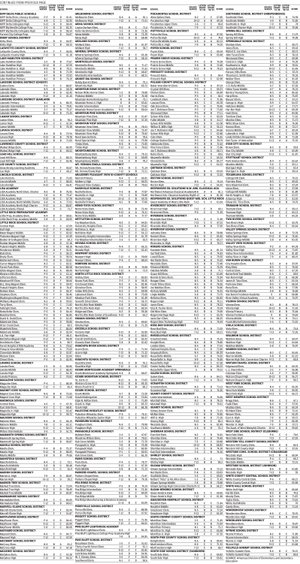 Accountability at a glance 2019 page 2