Plan to pull back weapons in Ukraine falls apart 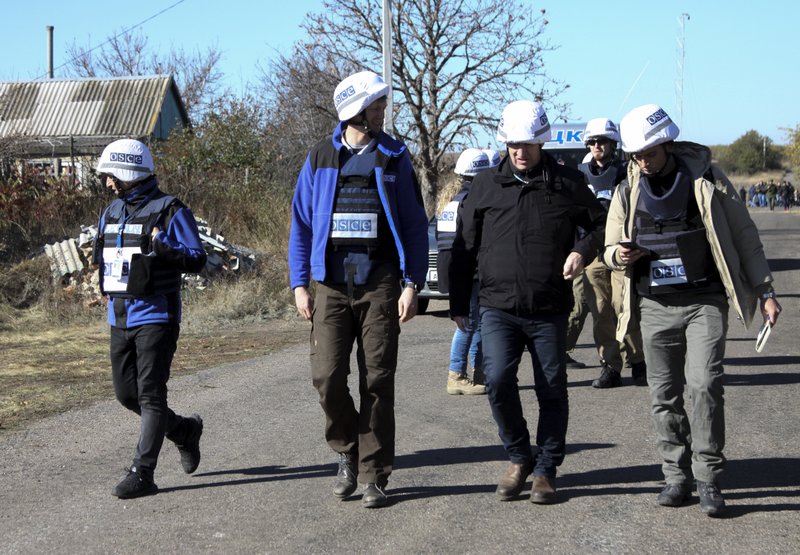 Deputy Head of the OSCE Special Monitoring Mission, Mark Etherington, second right, and other members of OSCE walk through a street near a frontline in Petrovske, Ukraine, Wednesday, Oct. 9, 2019. At least one Ukrainian police officer has been injured in scuffles between police and activists who have arrived to the frontline in eastern Ukraine to derail the pullback of government forces. (AP Photo/Alexei Alexandrov)

A much-anticipated pullback of heavy weaponry in eastern Ukraine was derailed Wednesday after both sides traded accusations of breaking the cease-fire.

Both Ukrainian government forces and Russia-backed separatists were expected to withdraw heavy weaponry from two locations in the Donetsk and Luhansk regions in what was seen as the final step before peace talks involving the leaders of Russia, Ukraine, France and Germany.

The Ukrainian military said Wednesday that it did not pull back weaponry as planned because of shelling from the other side. The separatists said that they had indicated to the other side that they were willing to start the pullback but did not receive a similar signal from the government troops.

The separatist conflict in eastern Ukraine has killed more than 13,000 people since 2014, and Ukraine's new president, Volodymyr Zelenskiy, made putting an end to the war his top priority.

Ukraine, Russia and the separatists last week agreed that an election could be held in the rebel-held east, but many in Ukraine feared that the deal was a concession to Moscow, which has been propping up the separatists with funds and weapons and occasionally sending in troops to fight alongside the rebels.

Several dozen far-right activists and veterans who have fought the separatists arrived Wednesday in the area of the planned pullback, saying that they would try to prevent it from happening.

Footage from the scene showed activists pushing the line of police officers who were guarding a checkpoint in the village of Kreminniy.

The Luhansk region's police said in a statement that one policeman was injured in the scuffles by one of the activists' vehicles. Two activists have been detained and some weapons have been seized from them.

Asked if the failed pullback of weaponry in the east would jeopardize the planned peace talks, Kremlin spokesman Dmitry Peskov told reporters Wednesday that it would be up to the leaders of Russia, Ukraine, France and Germany to decide whether to meet now or not.

Both the Ukrainian military and the rebels said they would be ready for a pullback today.

Information for this article was contributed by Nataliya Vasilyeva of The Associated Press.