Schitt's Creek is tip of iceberg for Levy, O'Hara 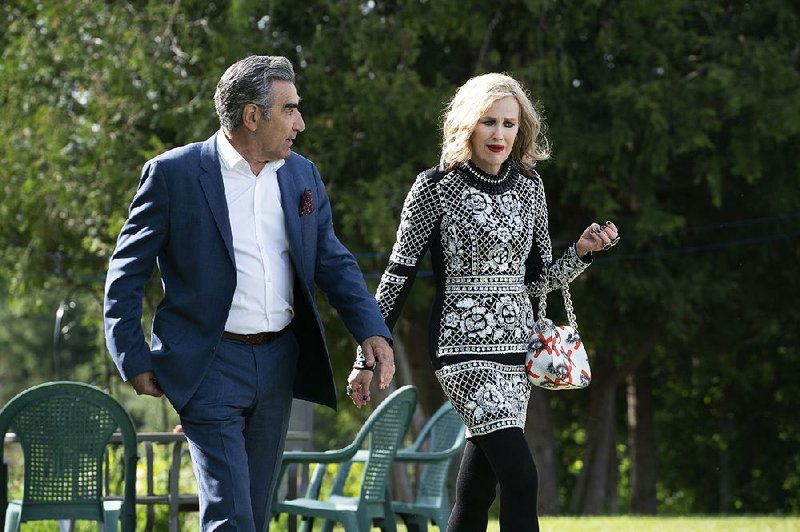 Eugene Levy and Catherine O’Hara star in Schitt’s Creek on Pop-TV. The pair met in the ’70s and have worked together on TV series like SCTV and a variety of comedy films.

It is astonishing to contemplate, for someone who's followed them since they co-starred on the Canadian-import sketch comedy SCTV well back in the 20th century, that there may be fans of Schitt's Creek only now becoming familiar with stars Eugene Levy and Catherine O'Hara

They have not just been waiting around for you to find them. Each has starred in at least one cultural blockbuster -- Levy in the American Pie films, in which he played the father of Jason Biggs, O'Hara as Macaulay Culkin's mother in the Home Alone films. Some may recall Levy from Splash, Father of the Bride, Dumb and Dumberer or Madea's Witness Protection.

Still, their work together -- SCTV, four films directed by Christopher Guest (all co-written by Guest and Levy), and five seasons of Schitt's Creek, as Johnny and Moira Rose, parents of David (Dan Levy) and Alexis (Annie Murphy), a formerly rich family coping with small-town life -- feels like a real partnership, a product of overlapping sensibilities and shared history. Four decades after they first worked together, they have undeniably become a team.

Levy and O'Hara met in the 1970s as castmates at the Toronto branch of the improv theater Second City -- the SC in SCTV, conceived as a Canadian cousin to the recently debuted Saturday Night Live. (O'Hara joined Second City when Gilda Radner left to become a Not Ready for Prime Time Player). Framed as a broadcast from a television station in the fictional metropolis of Melonville, it snuck onto American TV at odd hours, at first in syndication, then late-night NBC, and finally on Cinemax. It was strange and scrappy and felt like a sort of secret -- the Velvet Underground to SNL's Rolling Stones.

Levy's characters included disco-era comedian Bobby Bitman ("If I may, as a comic, in all seriousness..."), all gold chains and rings; actor Woody Tobias Jr., who plays henchman Bruno to Candy's Doctor Tongue on Monster Chiller Horror Theater; and news-of-little-import anchor Earl Camembert. O'Hara brought impersonations of Brooke Shields (singing Devo's "Whip It") and Katharine Hepburn, but her best-known recurring creation was the super-sensational Lola Heatherton: "I love you! I want to bear your children!" was one catchphrase, "It's scary!" another. Lola and Bobby would be seen together on The Sammy Maudlin Show, a bender of ostentatious emotionalism and extreme mutual puffery. In one memorable sketch within a sketch -- layers were the show's stock in trade -- the two bring a clip of their remake of On the Waterfront, On the Waterfront Again.

O'Hara and Levy appear together in the first four films directed by Christopher Guest, each improvised by the actors to an outline written by Guest and Levy. Although the films are satirical and absurd, and at times emphasize the mock in "mockumentary," they are all also genuinely compelling, emotionally true investigations into the creative impulse.

Waiting for Guffman (1996). Guest plays director Corky St. Clair in a comedy about small-town community theater, once described by O'Hara as "a story about little people, little pathetic people who dare to want bigger lives." A lock of hair teased into what she's called a "mull-bang," the actress is teamed with Fred Willard here, as travel agents Ron and Sheila Albertson, the Lunt and Fontaine of Blaine, Mo.; Levy is "newcomer" Allan Pearl, a dentist with a lazy eye.

Best in Show (2000). Levy and O'Hara play Gerry and Cookie Fleck, owners of a Norwich terrier entered in a Philadelphia dog show; Gerry was born with two left feet, literally, and Cookie has a lot of ex-boyfriends. "I like to think that Cookie and I work as a team, although I do nothing," says Gerry, describing their method. Their best moment is when Cookie, having sprained her knee just before competition, puts their fate in her husband's hands -- "Gerry, you're going to show Winky."

A Mighty Wind (2003). A tribute concert reunites veterans of the 1960s folk revival; Guest, Harry Shearer and Michael McKean, who were Spinal Tap, perform as the Kingston Trio-esque Folksmen. Levy and O'Hara play Mitch and Mickey, an estranged '60s pop-folk duo, along the lines of Ian and Sylvia or Richard and Mimi Fariña. He's damaged goods, for whom every spoken sentence is a hill to climb; she's down-to-earth and ordinary. Their relationship is the emotional center of the film, which hangs finally on the question of whether they'll finish their song "A Kiss at the End of the Rainbow" with an actual kiss. With "Kiss" nominated for best song, Levy and O'Hara performed as Mitch and Mickey.

For Your Consideration (2006). O'Hara and Levy run on different tracks in a film about Hollywood comebacks and hopes. She's Marilyn Hack, a long-struggling actress in the low-budget film Home for Purim, a period piece about a Southern Jewish family. Levy is Morey Orfkin, who manages past-his-sell-by-date leading man Victor Allan Miller (Shearer).

They both starred in The Last Polka (1985). Cinemax gave SCTV polka heroes Yosh and Stan Shmenge (Candy and Levy) their own hour-long mockumentary. O'Hara plays one-third of the singing group the Lemon Twins -- that is the correct math -- who appear in the special's concert sequences, in interviews and in photos suggesting romantic connections between the married Shmenges and the Lemons. The two other twins are played by Catherine's real-life sister Mary Margaret O'Hara and Robin Duke.

Committed (2001) This Canadian cartoon series, whose 13 episodes are currently available for purchase on Amazon Prime, is the great not-quite-lost, semi-known work in the O'Hara-Levy collaboration canon. A family comedy based on a comic strip by Michael Fry -- also known for Over the Hedge, in whose film version O'Hara and Levy play a porcupine couple -- it features the pair as Liz and Joe Larsen, challenged parents of three. Fellow Canadian and Kid in the Hall Dave Foley plays the family dog, Bob; former SCTV castmate Martin plays grandma.

From Cleveland (1980). This pilot for a late-night series, which aired once on CBS before nothing came of it, features the great Bob (Elliott) and Ray (Goulding) as late-night DJs whose segments frame sketches performed by SCTV cast members on location in Cleveland. Fun fact: Bob Elliott is the father of Chris Elliott, who plays mayor Roland Schitt on Schitt's Creek.