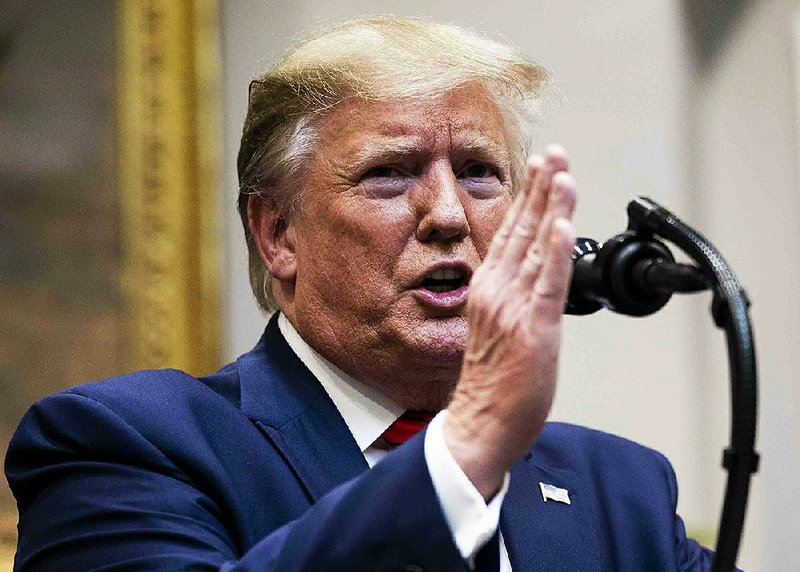 President Donald Trump said Wednesday that he would consider cooperating if House Republicans “get a fair shake” in the impeachment inquiry.

WASHINGTON -- President Donald Trump said Wednesday that he would consider cooperating with House Democrats' investigation into his dealings with Ukraine, if Republicans "get a fair shake."

On Tuesday, Trump's lawyers sent a letter to House Democratic leaders declaring a full halt to cooperation with what the administration termed an "illegitimate" inquiry, in part because a formal vote has not taken place.

"The whole thing is a scam, it's a fix," Trump said Wednesday of the inquiry, predicting that the fight could end up being "a big Supreme Court case."

Trump defended his decision not to cooperate, calling a whistleblower's complaint about his July call with Ukraine's leader "a fraud being perpetrated on the American public" and saying Republicans are being treated unfairly. He repeated he was being vilified for "a perfect phone call."

[Video not showing up above? Click here to watch » https://www.youtube.com/watch?v=sZ_qWFuExYM]

But Trump said he might consider cooperating if there is a vote, but only "if Republicans," who are a minority, "get a fair shake" and additional subpoena power.

"We would [cooperate], if they give us our rights," he said.

Trump's comments came as former Vice President Joe Biden made his most direct call yet for Trump's impeachment Wednesday.

China, Biden said, "was the third foreign power that we know of that [Trump] has asked in clear, unmistakable language to intervene on his behalf in the democratic proceedings of the United States," the former vice president said, referring to public remarks Trump made last week on the White House lawn.

"In full view of the American people, Donald Trump has violated his oath of office, betrayed this nation and committed impeachable acts. To preserve our Constitution, our democracy and our basic integrity, he should be impeached," Biden said.

Congressional Democrats are vowing to hold Trump accountable for pressing Ukrainian President Volodymyr Zelenskiy this year to investigate Biden and his son, Hunter Biden, at a time when U.S. military aid to Ukraine had been suspended.

Joe Biden told a crowd of about 100 people in New Hampshire that the move was an effort by Trump to "smear" him in order to pick his own opponent in 2020. The former vice president said that neither he nor his son did anything illegal, but he did not offer a detailed defense of Hunter Biden's actions in Ukraine.

Trump took to Twitter to respond to Biden's comments.

"So pathetic to see Sleepy Joe Biden, who with his son, Hunter, and to the detriment of the American Taxpayer, has ripped off at least two countries for millions of dollars, calling for my impeachment -- and I did nothing wrong," Trump tweeted.

Hunter Biden served for nearly five years on the board of Burisma, Ukraine's largest private gas company, whose owner had earlier come under scrutiny by Ukrainian prosecutors over possible abuse of power and unlawful enrichment. The younger Biden was not accused of any wrongdoing in the investigation. The investigation into Burisma was dormant at the time that Joe Biden, acting as President Barack Obama's point person on Ukraine, sought to have Viktor Shokin, the Ukrainian prosecutor, ousted, according to former Ukrainian and U.S. officials.

"All that defiance does is add to the case" against the president, including obstruction of Congress, said Virginia Rep. Gerry Connolly, a Democrat who sits on the House Oversight and Foreign Affairs panels. He said the White House strategy actually works to convince the public of the president's guilt, citing recent polls.

But one Republican senator said that while the president's actions have been inappropriate, impeachment would be a mistake.

"It's inappropriate for the president to be talking with foreign governments about investigating his political opponents, but impeachment would be a mistake," Sen. Lamar Alexander, R-Tenn., said in a written statement Wednesday. "An election, which is just around the corner, is the right way to decide who should be president. Impeachment has never removed a president. It will only divide the country further."

Gowdy, a former prosecutor who served four terms in the House before resigning in January, met with Trump for lunch Tuesday at the White House. He is expected to be a presence on television defending the president.

Separately, U.S. diplomats who had pushed for the Trump administration to restore security funding to Ukraine were advised by the White House to play down the release of the money when it was finally approved, documents show.

He said the National Security Council would not publicly announce that $141 million in State Department assistance was being restored after being held up in what the White House described as a normal review.

A series of previously unreported internal State Department emails reflect diplomats' frustration with the unexpected freeze on funding that Congress had already approved.

"We realize the strain this puts on posts and your ability to conclude grants and carry out programs," Jim Kulikowski, the State Department's regional assistance coordinator, wrote in an Aug. 5 email.

"We currently await further guidance and will provide you with an update as soon as we know about next steps," Kulikowski wrote in the message, which was sent to dozens of State Department employees, including diplomats in Ukraine and in countries across eastern Europe.

The email did not explain why the assistance was being withheld.

Trump administration officials said the funding had been frozen weeks earlier, before the July 25 telephone call between Trump and Zelenskiy. During that call, Zelenskiy said he was grateful for the security assistance that the United States had supplied to Ukraine, and made clear that he hoped to receive more.

A Ukrainian official has said Zelenskiy's government did not learn of the funding delay until about a month later. The White House has said the review merely sought to ensure the money was properly spent.

But the freeze irritated diplomats who questioned whether it was tied to Trump's demands for Ukraine to investigate the Bidens.

Once the decision to freeze the aid became public in late August, a bipartisan group of lawmakers pressed the administration to reverse course, saying that holding up the money sent the wrong signal as a new Ukrainian government confronted a continuing military threat from Russia.

Officials were informed that the freeze had been reversed -- and the $141 million in foreign military financing would be released -- in a Sept. 12 email from the White House that was then sent around the State Department.

Freden said the Ukrainian government had already been told that the funds were forthcoming. But he urged State Department employees not to announce the reversal.

"Ukrainians are aware, but NSC said that in the spirit of the 'hold' being a normal review, there will be no public announcement that it has been lifted," he wrote, referring to the president's National Security Council.

Some senior State Department officials readily volunteered information about the $141 million in aid as it was finally approved.

At a breakfast meeting with reporters Sept. 12, R. Clarke Cooper, the assistant secretary of state for political military affairs, said that department officials were notifying lawmakers that morning that the State Department's portion of aid to Ukraine was moving forward.

He told reporters to anticipate other notifications to Congress -- specifically $250 million in military aid from the Pentagon, assistance that the Defense Department announced later in the day would also move ahead. Lawmakers from both parties quickly announced the same day that the aid had been released.

Information for this article was contributed by Cleve R. Wootson Jr. and Felicia Sonmez of The Washington Post; by Mary Clare Jalonick, Matthew Daly, Jonathan Lemire, Lisa Mascaro, Jill Colvin, Darlene Superville and Alan Fram of The Associated Press; and by Lara Jakes and Maggie Haberman of The New York Times. 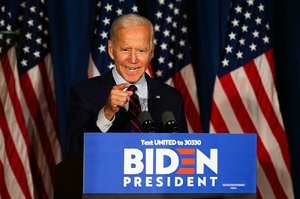 Photo by The New York Times/ELIZABETH FRANTZ
Joe Biden said Wednesday in Rochester, N.H., that President Donald Trump has “already convicted himself” and called for impeachment “to preserve our Constitution, our democracy and our basic integrity. More photos are available at arkansasonline.com/1010campaign/