Civilians flee as attack aims to oust U.S.-backed Kurds by Compiled by Democrat-Gazette staff from wire reports | October 10, 2019 at 7:59 a.m. 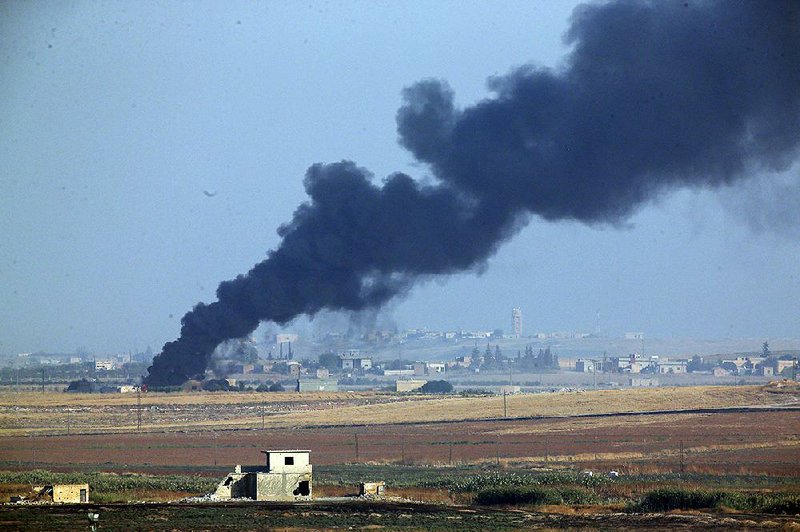 Smoke from a bombardment Wednesday by Turkish forces rises from a target just over the Syrian border in this photo taken from Turkey.

BEIRUT -- Turkey launched airstrikes and fired artillery Wednesday across its border into northeastern Syria to open a military operation aimed at flushing out a U.S.-backed militia, Turkish and Syrian officials said.

The Turkish attack came during a flurry of confusing policy statements from the White House, which on Sunday acquiesced to the operation, agreeing to move U.S. forces out of the way, but on Wednesday, hours after it began, condemned it.

"The United States does not endorse this attack and has made it clear to Turkey that this operation is a bad idea," President Donald Trump said in a statement Wednesday.

Turkish fighter jets streaked through the sky over Syrian towns, while explosions from artillery shells boomed, causing traffic jams of terrified civilians fleeing south in trucks piled high with their possessions and children.

[Video not showing up above? Click here to watch » https://www.youtube.com/watch?v=79LGQM8-p0Q]

At least seven civilians and one member of the Kurdish-led force known as the Syrian Democratic Forces were killed in the Turkish bombardment, Kurdish activists and a Syria war monitor said.

Turkey's long-planned move to root out U.S.-allied Kurdish forces in northeastern Syria has accelerated rapidly since Trump gave the operation a green light in a call Sunday with President Recep Tayyip Erdogan of Turkey.

The operation could open a dangerous new front in Syria's 8-year-old war, pitting two U.S. allies against each other and raising the specter of sectarian bloodletting. Even before it began, it had set off fierce debates in Washington, with members of Congress accusing Trump of betraying the militia that fought beside the United States to defeat the Islamic State group.

"Pray for our Kurdish allies who have been shamelessly abandoned by the Trump administration," Sen. Lindsey Graham, R-S.C., wrote on Twitter. "This move ensures the reemergence of [the Islamic State]."

Trump insisted Tuesday that "in no way have we abandoned the Kurds," and Wednesday said he firmly opposed the operation.

"Turkey," he added, "has committed to protecting civilians, protecting religious minorities, including Christians, and ensuring no humanitarian crisis takes place -- and we will hold them to this commitment."

Trump said he expected Erdogan to conduct the offensive "in as humane a way as possible."

Trump also said Wednesday that it would be "easy" for the United States to form new alliances if Syrian Kurds leave the fight against the Islamic State to fend off the Turkish attack, noting that "they didn't help us in the second World War, they didn't help us in Normandy" and were only interested in fighting for "their land."

"With all of that being said, we like the Kurds," he said.

The United States withdrew from 50 to 100 troops from northern Syria in advance of Turkey's operation, and U.S. military officials said the U.S. was not providing assistance to either side.

Gallery: Scenes from the Turkey-Syria border

"Our mission is to prevent the creation of a terror corridor across our southern border, and to bring peace to the area," Erdogan said in a tweet announcing what he called "Operation Peace Spring."

Erdogan discussed the incursion by phone with Russian President Vladimir Putin. Erdogan's office said he told Putin the military action "will contribute to the peace and stability" and allow for a political process in Syria.

The operation's scope was vast, with strikes hitting in or near at least five towns along a stretch of more than 150 miles of the Syrian-Turkish border.

The most intensive strikes were near Tel Abyad and Ras al Ain, the two towns that U.S. forces withdrew from Monday. But they also targeted Kobani and Qamishli, where one strike left a building in flames and a body on the sidewalk, according to a video shot by a journalist.

"There is a state of fear and terror among the people here, and the women and children are leaving the town," said Akrem Saleh, a journalist reached by phone in Ras al Ain. Many of the men were staying home because they feared that Syrian rebels backed by the Turks would loot the residences if they found them empty.

The Britain-based Syrian Observatory for Human Rights said those killed in the Turkish bombardments included two Christian Assyrians in Qamishli, a married couple and their child, a man in a village outside the town of Tal Abyad, and a child in a village west of Qamishli.

Erdogan had been threatening to send troops into northeastern Syria to uproot the militia, which the United States has partnered with for years to fight the Islamic State militants. Turkey considers the militia a terrorist organization linked to a Kurdish guerrilla movement.

In an op-ed in The Washington Post, a government spokesman, Fahrettin Altun, wrote that Turkish forces, with their Syrian rebel allies, "will cross the Turkish-Syrian border shortly."

"Turkey has no ambition in northeastern Syria except to neutralize a long-standing threat against Turkish citizens and to liberate the local population from the yoke of armed thugs," he wrote.

The Syrian Democratic Forces, which is made up of the U.S.-allied Kurdish troops, said the area was "on the edge of possible humanitarian catastrophe" because of the Turkish incursion.

"This attack will spill the blood of thousands of innocent civilians because our border areas are overcrowded," the group said in a statement.

The Kurdish-led administration that governs the area issued a call for "general mobilization" to fight the Turks.

"We call upon our people, of all ethnic groups, to move toward areas close to the border with Turkey to carry out acts of resistance during this sensitive historical time," it said.

The U.S. military has cut off all support to the militia, two U.S. military officials said, speaking on condition of anonymity to discuss confidential military assessments.

One official said U.S. warplanes and surveillance aircraft remained in the area to defend the remaining U.S. ground forces in northeast Syria but they would not contest any Turkish warplanes attacking Kurdish positions.

On Wednesday, Sen. Chris Van Hollen, D-Md., said he and Graham are co-sponsoring a bipartisan Senate bill that would halt U.S. military assistance to Turkey and clamp sanctions on Erdogan's U.S. assets.

The measure would also impose sanctions on foreign military sales to Turkey, an outline of the legislation said. It would take effect immediately, and its restrictions would be lifted only when the Trump administration certifies that Turkey has ceased its operations in northern Syria and withdrawn its forces from the region.

Van Hollen said he and Graham planned to introduce the legislation as soon as Congress returns from a recess next week. He said they would seek commitments from Senate leaders to take the legislation to the floor quickly.

Meanwhile, lawmakers on both sides of the aisle continued to warn that the Turkish assault is a threat to U.S. policy interests.

"A Turkish military advance into Syria threatens to halt momentum against ISIS, directly assaults our SDF partners, and could give the likes of al-Qaeda and Iran new footholds in the region," Rep. Kevin McCarthy, R-Calif., tweeted. He called on Turkey to "stop immediately and continue to work with the US to secure the region."

House Republican Conference Chairwoman Rep. Liz Cheney said the withdrawal decision was having "sickening and predictable consequences." In addition to sparking new Islamic State attacks, the Wyoming congresswoman said in a statement, "this decision aids America's adversaries, Russia, Iran and Turkey, and paves the way for a resurgence of ISIS."

More than 50 Democratic House members issued an open letter to Trump on Wednesday, saying his decision to withdraw U.S. troops from northeastern Syria in advance of the Turkish operation puts U.S. allies in danger, jeopardizes U.S. counterterrorism efforts in the region and will cause "current and future allies to question the reliability of the U.S. as a partner."

But Trump pushed back, reiterating his opposition to U.S. military presence in the Middle East, writing on Twitter that "USA should never have been in Middle East."

He said Turkey should take control of captured Islamic State fighters from Europe whose countries had refused to take them back and who are imprisoned in northeast Syria.

"Turkey is now responsible for ensuring all ISIS fighters being held captive remain in prison and that ISIS does not reconstitute in any way, shape or form," he said in his statement, using an alternative name for the Islamic State group.

Tens of thousands of Islamic State fighters and their families are in prisons and camps overseen by the Syrian Democratic Forces, whose leaders say there have been no discussions with the United States about handing over the facilities.

Turkey made efforts to win diplomatic support for its operation, informing the United States, Russia, Britain, NATO and the secretary-general of the United Nations, the Turkish Defense Ministry said.

NATO Secretary-General Jens Stoltenberg urged Turkey, a NATO member, "to act with restraint" and to ensure that "the gains we have made in the fight against ISIS are not jeopardized."

Amelie de Montchalin, the French junior minister for European affairs, said France, Germany and Britain were drafting a joint statement that would be "extremely clear about the fact that we very strongly, very firmly condemn" the Turkish offensive.

A number of countries, including Russia and Iran, both allies of President Bashar Assad of Syria, called for talks to calm the situation instead of military action. 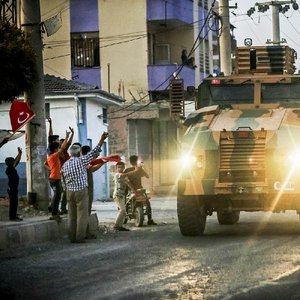 Photo by AP/LEFTERIS PITARAKIS
Residents of Akcakale in southeastern Turkey near the border cheer Wednesday as a convoy of Turkish military vehicles roll toward Syria after airstrikes and artillery fire aimed at Kurdish forces inside Syria began. More photos are available at arkansasonline.com/1010border/ 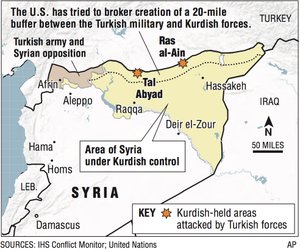 A map showing the area of Syria under Kurdish control.