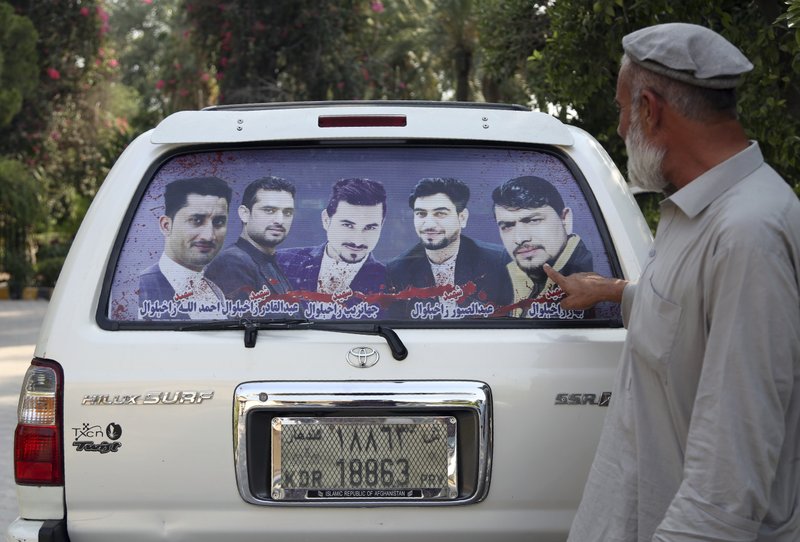 In this Tuesday, Oct. 1, 2019, photo, Zakhiwal's uncle, Mohammad Yaqoob Malikzada shows pictures of four brothers in the back of his car, who ware killed during a raid by the Afghan soldiers trained by CIA only known as Unit 02 after an interview to the Associated Press in Jalalabad city east of Kabul, Afghanistan, Anger is mounting over the increasing numbers of civilians dying in misdirected US aerial strikes and heavy- handed tactics of CIA-trained Afghan force. (AP Photo/Rahmat Gul)

The report, released simultaneously in Kabul and Geneva, said the U.N. verified 39 civilian casualties, including 14 children and a woman, from airstrikes in May on more than 60 sites.

The sites were identified by U.S. and Afghan forces as drug-production facilities in Bakwa district in western Farah province and in neighboring Delaram district in Nimroz province.

The U.S. military promptly disputed the U.N. findings, finding fault with the report's verification methods and denying there were civilians among the dead.

However, the U.N. had sent fact-finding missions to the site, together with Afghanistan's Human Rights Commission, and they interviewed dozens of people, both survivors and respected elders.

No one denied there were methamphetamine labs in the area and some of the casualties had been working in the labs, the report said. But targeting the labs was contrary to rules of war, the U.N. added, saying the people in the labs were civilians and that while the Taliban benefit from drug money and from taxes they extort from those who produce the drugs, the lab workers were noncombatants.

The U.N. report also said some of the targets hit were civilian homes.

"In one incident on 5 May in Shagai village of Bakwa district, multiple reliable and credible sources reported that three children were killed when an airstrike impacted their home," it said.

"After one strike hit close to the house, the father shouted to his family members to run away from the house before a second bomb was dropped on the house. Three young boys, aged between one and a half to seven years old, were unable to escape in time," the report also said.

The U.N. said it had received "specific and detailed" information on 145 civilian casualties but could so far only verify 39 casualties. It said "credible reports" of at least 37 more civilian casualties, mostly women and children, were being reviewed.

The U.S. military insisted the U.N. had wrongly identified those in the labs as civilians, saying they were Taliban. It also raised doubts about the sources for the U.N. information, claiming they either had conflicted motives or lacked adequate knowledge.

In a two-page rebuttal to the U.N. report, the U.S. military said the May strikes followed a year-long intelligence operation to locate and monitor the drug labs. The strikes took place in daytime, to allow for effective identification of those entering and leaving the area, it said.

It detailed steps taken by the U.S. military and Afghan forces before, as well as after the strikes, resulting in their conclusion that no civilians were targeted.

The statement however, accused the Taliban of hiding behind civilians, and added that the U.S. military investigates and compensates whenever civilians are found to be hurt or killed in U.S. strikes.

The U.S. has come under increasing criticism for civilian casualties as a result of airstrikes in recent months in Afghanistan.

In a July report, the U.N. said U.S. and Afghan forces killed more civilians in their operations against insurgents in the first six months of 2019 than the number of people killed in militant attacks, including those by the Taliban. The U.N. blamed the rising death toll by U.S. and Afghan forces at least in part on increased airstrikes. The U.S. has rejected that U.N. report as well.