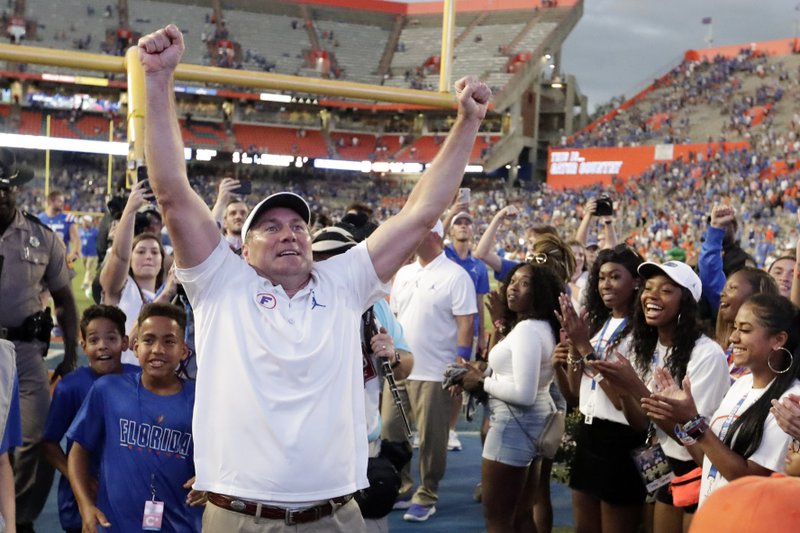 GAINESVILLE, Fla. -- Florida has never been this significant of an underdog during Dan Mullen's tenure. Not in his four years as the team's offensive coordinator (2005-08) and not in his two years back as head coach.

"It helps us, though," defensive tackle Adam Shuler said. "It helps us because it motivates a lot of the guys. We got that chip on our shoulder and we're going to keep proving people wrong."

Shuler said it's already been mentioned in the locker room and surely will be talked about again before the Gators take the field in Baton Rouge.

"We saw it all on social media," he said. "We're very aware of it, and it's definitely in our head."

Mullen hasn't been a double-digit underdog in 72 games with the Gators. Even in the 2006 BCS Championship Game against Ohio State in Glendale, Ariz., the Buckeyes were only seven-point favorites. Meyer and Mullen had staff members put together a huge bulletin board filled with headlines and newspaper clippings of everything that could be considered even remotely negative about the Gators and placed it in the team hotel for the week.

It worked as fired-up Florida dominated from the start.

The Gators wouldn't reveal what approach they might take this time around.

"We'll keep being the underdog, doesn't faze us," defensive lineman Kyree Campbell said. "We just going to come out and play. It's great motivation, but at the end of the day ... they want to label us underdogs, then we're cool with that. We'll play as underdogs."

The Gators, meanwhile, barely held on to beat unranked Miami in the season opener, had to erase an 11-point deficit late to win at Kentucky and led two Football Championship Subdivision teams 17-0 at halftime before pulling away. And many credit the victory against Auburn to freshman quarterback Bo Nix looking overwhelmed in front of 90,500-plus in the Swamp.

The Gators were 2½-point underdogs against Auburn.

"I think we probably got a little more respect now that we've beaten Auburn," receiver Josh Hammond said. "So I think the message for us, our mentality kind of moving forward is just, you know, we'll just go out and kind of earn the respect we deserve."

Mullen handled the 14-point spread in stride, turning it into a playful proposition.

Mullen has a 3-1 record at Florida against top-10 teams, including last year's 27-19 victory against then-No. 5 LSU in the Swamp.

The Tigers surely want to avenge that loss and remain squarely in the mix for the College Football Playoff. They don't sound sold on the line, either.