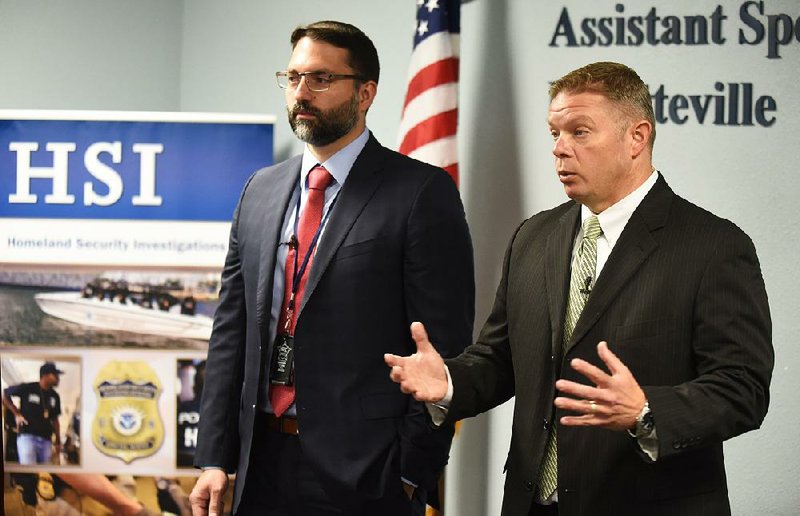 FAYETTEVILLE — Shoppers who want to ghoul up their eyes with decorative contact lenses this Halloween should be wary of the seller, Homeland Security Investigations officials said Friday. The lenses could be counterfeit and cause eye damage.

The warning came as part of a multistate move to target retailers selling counterfeit products such as makeup, decorative contact lenses and other cosmetics that pose a health or safety risk to the public. They may contain harmful bacteria, toxins or lead, a federal agent said at news conference.

“Always buy from a reputable [source] if you are going to be buying these types of items,” said Nick Nelson, assistant special agent in charge of Homeland Security Investigations in Arkansas. “Obviously we don’t want anyone putting that on their skin … so we are going to do our best to remove that type of stuff from the market,” he said.

Agents in Louisiana, Mississippi and Arkansas will be combing through stores and removing suspect items.

“What that is going to mean for the Fayetteville area — we are going to be aggressively looking for intellectual-property rights crimes, counterfeit crimes and with that, in particular with the Halloween season coming up, we are focusing on health and safety concerns,” Nelson said.

Counterfeit Halloween cosmetics aren’t the only products being targeted. Eric Cardiel, a supervisory special agent in Fayetteville, said agents will be looking for counterfeit sports jerseys, too.

“It’s a great time for the surge,” he said, with football season and baseball playoffs in full swing.

Agents can seize illicit products and destroy them, and vendors are subject to fines or prosecution, depending on how egregious the activity is, Cardiel said. A significant amount of counterfeit product is shipped from China and other countries, he said.

Nelson said established retailers are usually safer for shoppers because they have protocols in place to prevent any type of counterfeit merchandise from reaching the shelves. Online retailers are a different animal.

“If you are buying online, be cautious because you may be on a website that is promoting a legitimate product but actually selling a counterfeit product,” he said.

The Fayetteville office has a list of retailers they want to check for compliance. Shane Watts, resident agent in charge in Fayetteville, said agents plan to conduct thorough searches in the coming days.

“We’ll look at some online marketplaces that are popped up … like the little novelty stores or kiosks that’ll come up … we’ll give them a look and check out and see what they’re selling,” Watts said. “We’re not here to spoil Halloween for people.”

Asked how many stores are on the Fayetteville list, he was vague, saying “there’s a few.”

“The whole idea is, if we get nothing, that’s kind of a win, because we did our job notifying the public about some of these things, and these vendors that are out there have taken the stuff off the shelves — and if they do, great,” Watts said.

Hannah Reed, 22, of Fayetteville, said she came across counterfeit makeup when she lived in Mississippi through a vendor on Facebook marketplace. They were selling what looked to be high-end makeup for $10. But on closer inspection, it had a questionable “vinyl-like texture,” she said, and refused to apply it. She later reported the transaction to authorities.

“It’s a big problem and the makeup can be really toxic,” said Reed, store manager of a seasonal Spirit Halloween store in Fayetteville.

Reed said the store does not sell decorative contact lenses.