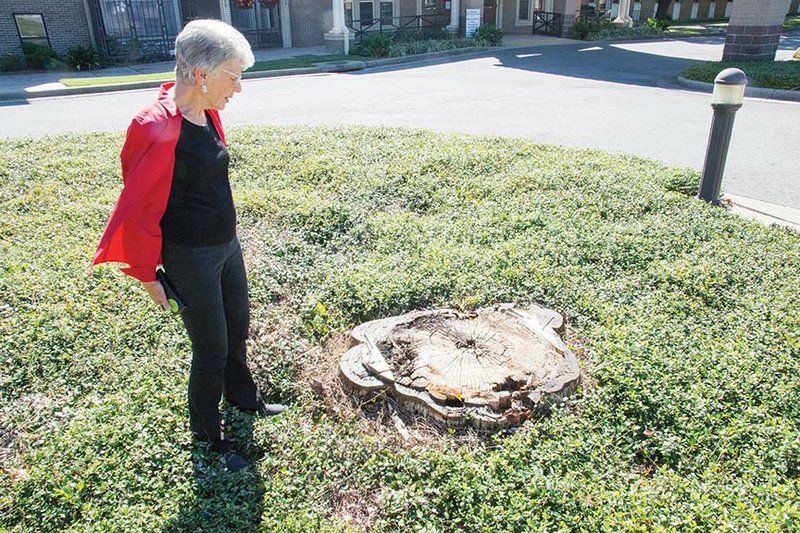 First United Methodist Church member Cecilia Patterson looks at the spot where the 9-foot-tall shepherd and lambs stood for seven years. The statue, carved in 2012 by Iowa chain-saw artist Gary Keenan, had interior damage and fell. No termites were spotted, however, Patterson said.

CONWAY — A 9-foot-tall wooden chain-saw carving of a shepherd who stood watch for seven years outside First United Methodist Church in Conway has fallen.

“He had a lot of … damage on the inside of him and just wasn’t staying up,” said the Rev. Lauren DeLano, associate pastor.

Gary Keenan, an award-winning chain-saw artist from Des Moines, Iowa, was commissioned by the church in 2012 to give new life to a dying elm tree in the parking lot north of the sanctuary.

DeLano said she and others noticed that the shepherd was leaning slightly, and he fell on the morning of June 27. The sheep are “pretty much done, too,” she said.

An article in the church newsletter written by DeLano and Colleen Holt, communications assistant for the church, said, in part:

“When [the shepherd] fell on the morning of Thursday, June 27, it became clear that he had … damage and had rotted on the inside. He lay peacefully in the bed of vinca vines, holding one of his sheep tightly in his arms. We have tried to salvage the top half of the sculpture so we can display the bust somewhere outside of the church.”

DeLano said the bust of the shepherd is being stored “until we can decide what to do with it.”

Cecilia Patterson, who is facilitator of the church’s Green Team, said in 2012 that she watched the big elm tree slowly die and lose its limbs for two years, and the church was concerned about safety.

“I started thinking, ‘Wouldn’t it be neat if we could repurpose that tree into a work of art that would continue to bring joy?” she said in an earlier interview.

Patterson got Keenan’s name by calling someone with the annual chain-saw-carving competition in Eureka Springs, where Keenan had competed.

She said the most common suggestion for the statute was a shepherd and his lambs because members wanted something that would be “approachable and understandable for children.”

Patterson said she and Sam Teague, also a member of the church, were primarily responsible for keeping the wood sealed, as per Keenan’s instructions.

“It was sort of a shock, actually, because we’d worked on [the shepherd] and thought we’d gotten him in really good shape,” she said. “It was sealed; the stump was sealed; everything was done correctly. The last thing we did, … we brought in a professional painter, and he really painted it and sealed it off and did cosmetic work on it and made it look better.”

However, the shepherd’s robe and most of his torso deteriorated.

“It was just like the core of the tree had just deteriorated; you know how wood gets soft and porous,” Patterson said. “He died of old age; that’s what I think. He was an old tree. He had been water-starved. … He had a second life there for a while.”

Teague agreed with Patterson, and he said that despite what some people think, it wasn’t termites that got the shepherd.

“It was rotted; it rotted out. It was not termites,” Teague said.

Keenan said that without knowing how well the sculpture was kept sealed, he couldn’t say what happened, but the fact that it was a diseased tree “could be a factor, certainly.”

The shepherd was Keenan’s first carving in Conway. In 2013, he also carved Valor out of one of UCA’s World War II red oak Memorial Trees that was diseased, but termites invaded the sculpture. It was put in storage in 2017. Keenan came back to campus in March and carved Valor II out of wood purchased from a tree service, and so far, so good.

In the church newsletter, DeLano called the shepherd “a piece that has touched many

people’s lives,” adding, “A friend of mine, who is now a pastor, said the shepherd was an important part of her call story. As she gazed upon the shepherd while at the church for a retreat a few years ago, she realized she was called to shepherd people and called to ordained ministry.”

DeLano said the church may commission another piece of art to go in the empty space in the parking lot where the shepherd stood. She asks church members who have suggestions or want to help with the project to contact her at ldelano@conwayfumc.org or (501) 329-3801.

Patterson said that although she is sad that the shepherd is gone, it still may have life.

“The bottom line is, he really served a great purpose, and we may still be able to do something else with him,” she said.