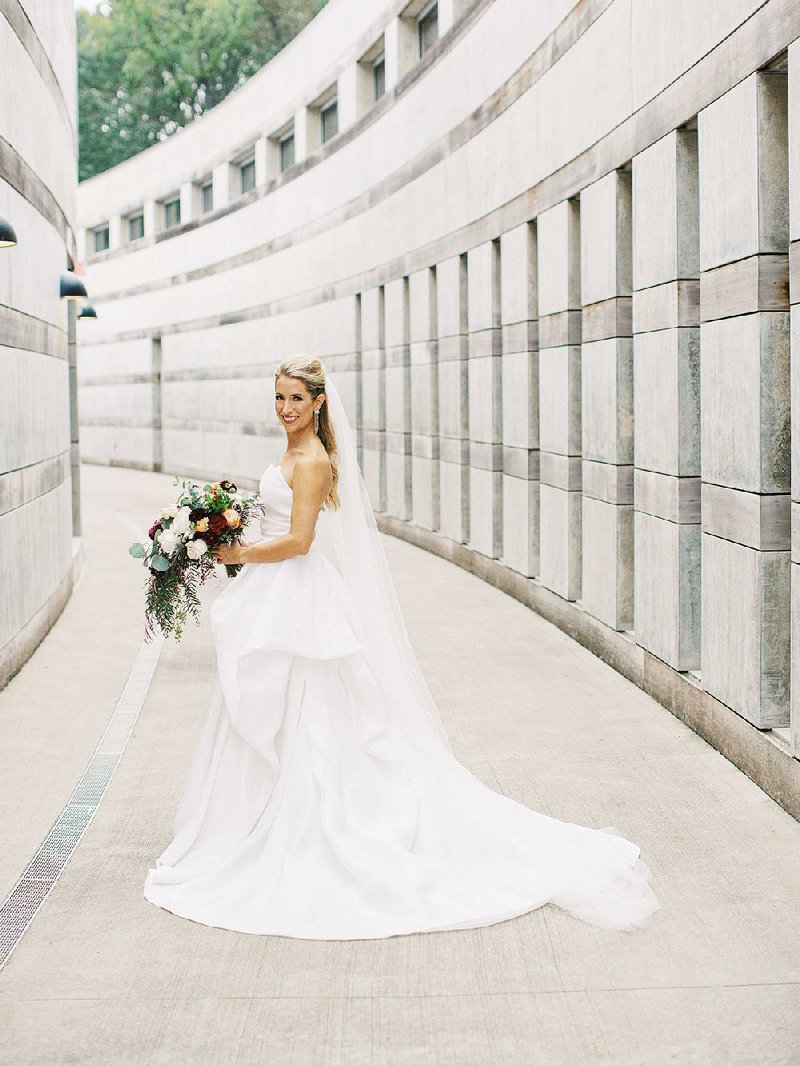 Pam and Jay Gadberry of Little Rock are the parents of the bride. She is the granddaughter of Charlotte and Jim Gadberry, also of Little Rock, and the late Ramona and Noel Pangle of Flippin.

The ceremony site was decorated with a custom-built wooden cross and a mix of wedding flowers and greenery. Music was by Diamond Empire String Quartet and vocalist Rebecca Johnson Webber, cousin of the bride.

The bride, given in marriage by her father, wore a strapless silk ballgown by Monique Lhuillier with a sculptural bodice and hand-tufted skirt with a chapel train. She carried a bouquet of burgundy dahlia, seeded eucalyptus, green hellebore, hanging pepper berry and coral roses.

The bride's honor attendants were Alex Gadberry of Philadelphia, sister of the bride, and Kim Barringer Fields of Little Rock. Bridesmaids were Cayman Carlisle and Corbin Carlisle Foster, both of Fayetteville and sisters of the groom; Caitlin Gilbert of San Jose, Calif.; Hollin Koh of Dallas; Holly Hilburn Roblee of San Francisco; and Courtney Kleine Lambert and Rachel Culp Talley, both of Little Rock. They wore gowns in shades of burgundy, cinnamon rose and champagne and each carried a smaller version of the bridal bouquet.

Flower girls were Addison Williams of Little Rock, sister of the groom; and Juniper Meredith and Lillian Meredith, both of Bentonville.

After the ceremony, there was a cocktail hour on the lawn of the South Sculpture Garden at the museum. A seated dinner was held in the Great Hall at Crystal Bridges. Music was by Diamond Empire Band.

The bridegroom has a bachelor's degree in international business/management from the University of Missouri and attended East China Normal University. He is vice president of economic development and entrepreneurship at Greater Bentonville Area Chamber of Commerce.

The couple will live in Bentonville after a honeymoon in Thailand and Vietnam.