ARKANSAS SIGHTSEEING: This pumpkin patch and farm is a blast from the past

The pig races at Arkansas Frontier, watched by students from a Little Rock grade school, are narrated by Mary Sims. (Photo by Marcia Schnedler, special to the Democrat-Gazette)

QUITMAN — On a sunny Saturday morning, the pigs are off and running near Quitman before an audience that includes a lively grade-school group from Little Rock. There's no betting on these races, but the audience is cheering merrily as four piglets dash around the half-circle track.

This swine-focused fun is among the potpourri of family attractions at Arkansas Frontier, a living-history farm that functions during the Halloween season as a pumpkin patch — and a lot more. Retired schoolteachers Linda and James Johnson operate what amounts to a temporary theme park with an educational focus for youngsters.

Dozens of pumpkin patches across Arkansas sell visitors the makings of jack-o'-lanterns, often with the chance to pick their orange favorite off the vine. But 25-acre Arkansas Frontier ranks No. 1 in the Natural State, according to Good Housekeeping. The national magazine's top picks for 2019 in each of the 50 states include this salute to the Johnsons' operation:

"For those who want to learn while they search for the best pumpkin in the patch, Arkansas Frontier provides an interactive educational experience. You can tour an old-fashioned schoolhouse, see what early frontier living was like, and mine for gemstones." 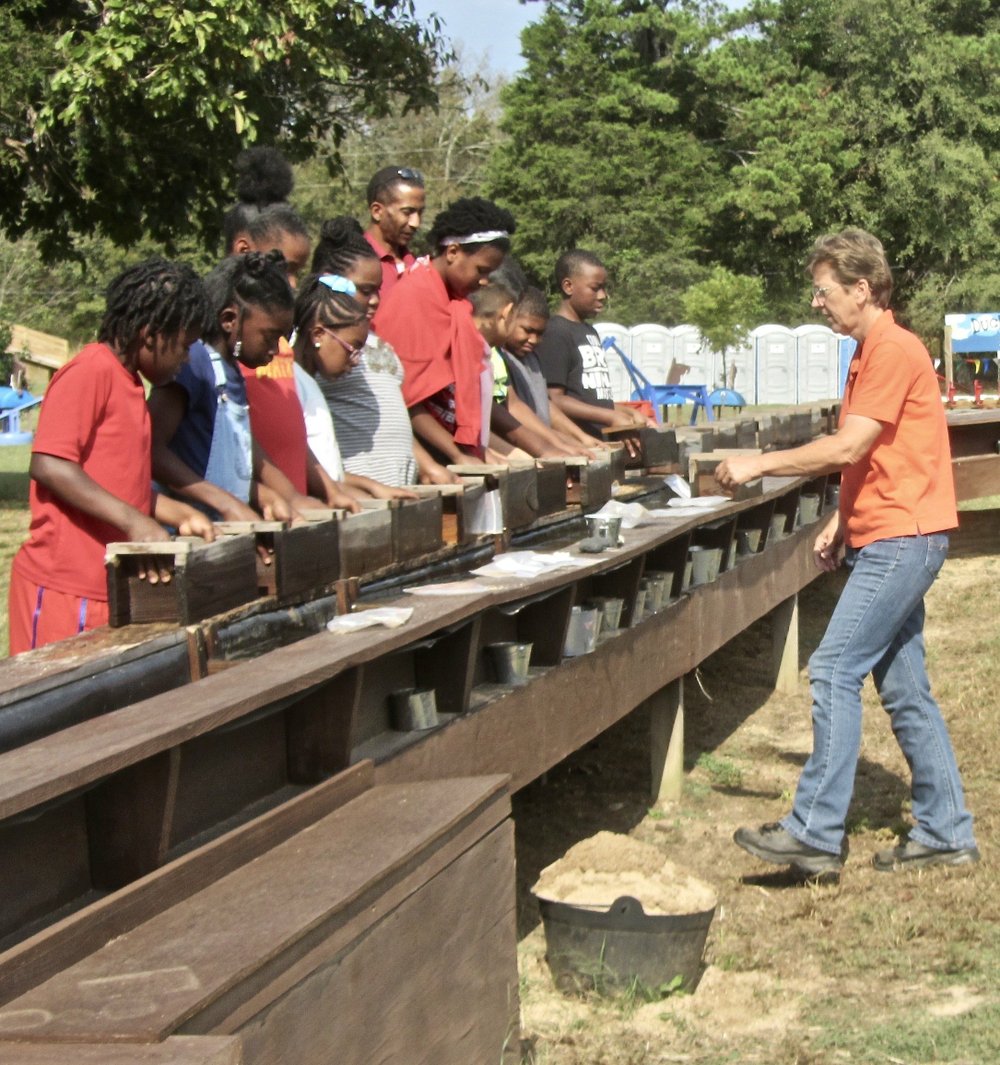 An Arkansas Frontier interpreter shows visitors how gemstones can be mined and sorted. (Photo by Marcia Schnedler, special to the Democrat-Gazette)

A sign at the entrance lists an array of other attractions and activities. Among them are farm animals, hayrides, a pioneer homestead, a mountain man, an enchanted forest, an American Indian village, Liberty Hall, duck races (using plastic ducks, not live ones), a playground, a picnic area — and the racing porkers.

Enlivening the pig races, scheduled for 11 a.m. and 3 p.m. on Saturdays, is jaunty banter from Mary Sims. For this morning's two sprints, she divides the Carver Magnet Elementary School youngsters and other visitors into four rooting sections, one for each little porker. The captain of the winner's group is gifted with a rubber pig snout, donned to a chorus of laughter.

This is the 21st autumn for the Johnsons' living-history farm. They continue to add attractions, as described by James Johnson:

"Last year, we built Big Foot Races for kids and adults. They're a lot of fun and take some teamwork. Three or four people have to hold ropes and lift their feet to move forward.

"We also wanted to include the study of dinosaurs, so we came up with the Dino-Dig. This is a children's favorite because they love the idea of dinosaurs. They dig for dinosaur eggs and place them in the 'Jurassic Incubator' to hatch. Then they can take home a baby dinosaur."

At the American Indian village, interpreters work with youngsters to make pottery and other crafts. The Enchanted Forest is a walk through the woods past fairy-tale characters to a fenced-off pond populated by replica alligators and turtles.

The attraction's Frontier Homestead gives a sense of the many chores faced by rural children a century ago. The displays include a corn sheller, a corn grinder, milk-cow stations and a laundry area equipped with wash pot and scrubbing board.

As part of the learning focus, a billboard emblazoned with pumpkin silhouettes asks four questions. The likeliest stumper: What is the world record for the largest pumpkin? The mind-boggling answer: 1,810.5 pounds.

For information on other Arkansas pumpkin patches, go to pumpkinpatchesandmore.org/ARpumpkins.php

Getting there:From Arkansas 25 in Quitman,

Go about 2 miles and turn right on Wesley Chapel Road.

The farm will be on your right.

Print Headline: ARKANSAS SIGHTSEEING: This pumpkin patch and farm is a blast from the past