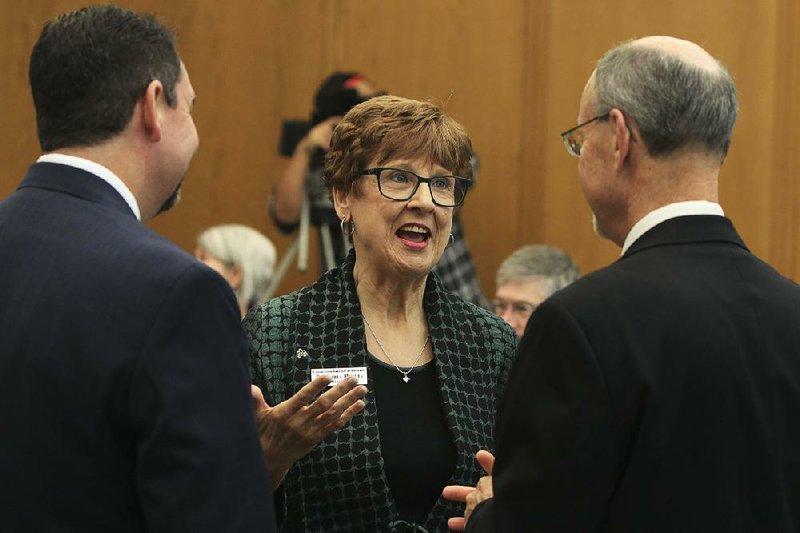 Facing a budget deficit and a sharp student population loss, the chancellor of Arkansas' only public open-admissions university will resign next semester.

Karla Hughes will step down and retire from the University of Arkansas at Monticello on Dec. 31 after serving four years as chancellor, according to a news release from the University of Arkansas System. She took over as the university's chancellor Jan. 1, 2016, and was the first woman to lead a four-year institution within the system, the release said.

Terms of Hughes' separation with the university were not available Monday.

Hughes is the second University of Arkansas System chancellor to resign this year. UALR Chancellor Andrew Rogerson resigned in September. Both were hired by UA System President Donald Bobbitt.

Hughes said in the release that she was proud of her accomplishments as chancellor, "especially in demonstrating that UAM is, without question, a student-centered destination for higher education."

The university has improved its student retention rate and started initiatives designed to continue that improvement. More than 50% of UAM students who started in fall 2017 stayed in school, up from 46.7% for those who started in the fall of 2013. Retention rates improved four years in a row at UAM, according to the latest Arkansas Department of Higher Education retention report on the 2017-to-2018 rate.

Gregg Reep, chairman of UAM's board of visitors, said he was surprised that Hughes is leaving the university so quickly, but he added that some other things, such as the university's budget, also will have to change quickly.

Reep said the administration has told the board it projects a $1 million to $2 million shortfall, a year after cutting a few million dollars from the budget.

The university has had a large drop in student population.

The university's enrollment was more than 3,600 in the fall before Hughes took over. In her first year, enrollment grew to about 3,900 students. It then fell to about 3,700 the next fall, 2017, and to about 3,200 the year after that. The university reports on its website 2,855 students enrolled this fall.

In 2017, the university had more than 1,000 concurrently enrolled high school students. It has about 400 this fall.

While UAM is losing students, the region around it is losing residents. Most of the university's students are from Arkansas -- about 88% -- and nearly all of those are from southeast Arkansas, according to university enrollment reports. About 70% of students this fall came from Drew County and the eight counties surrounding it.

The population of Drew County, where Monticello is located, has remained stable in recent years, but the population has been shrinking in surrounding counties. UAM has satellite campuses in Crossett in Ashley County and McGehee in Desha County -- rural counties that the U.S. Census Bureau estimates have lost more than 1,500 residents since 2010.

While some other public universities in the state have unconditional admissions based on grade-point average and ACT scores, UAM is the state's only public university that admits any student who has a high school diploma or general education diploma.

It's also located in the smallest city of all of Arkansas' public universities, in a relatively rural and economically depressed corner of the state.

That means UAM serves a critical population, said Lynn Pasquerella, president of the Association of American Colleges and Universities.

"Those who are at rural institutions are often the most vulnerable and marginalized populations," Pasquerella said.

But rural colleges and universities are facing challenges related to their resources, she said.

"All rural universities are facing the same challenges," Pasquerella said. "Those that are most successful are partnering with other colleges and universities to provide a variety of offerings."

The Arkansas Delta has fewer college graduates and shortages in many professions, including nursing and education.

Reep, of Warren, said UAM plays a large role in southeast Arkansas and the rest of the state. He noted the forestry school, which is the only one in Arkansas. A lot of area nurses and teachers graduated from UAM, he said, and the school sends many students on to medical school.

"It's important that we keep it going," Reep said.

When Bobbitt recommended hiring Hughes in 2015, he said he thought UAM had an opportunity to be a model for open-admissions schools.

Hughes and Bobbitt decided that Hughes needed to resign, according to Monday's news release.

"Dr. Bobbitt and I discussed the challenges, both internal and external, that UAM has faced during my tenure, and we both felt the best step forward for the university was that I resign as chancellor," Hughes said in the release.

"There's no question that there are many challenges ahead facing the campus to help meet its unique regional and economic needs and finding the right leadership for the institution will be a top priority moving forward," Bobbitt said in the release.

Hughes has worked in higher education since 1971, when she took a job as an undergraduate research assistant at Kansas State University in the Department of Foods and Nutrition. Before becoming UAM's chancellor, she was the executive vice president and provost of the University of Louisiana System, a role she held for about a year.

Hughes has held academic appointments at six universities and received tenure at three of them, the release said.