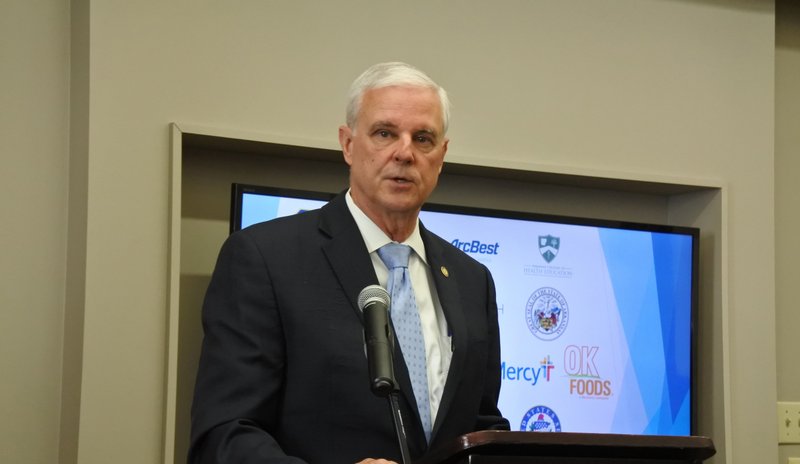 All four Republicans backed a bipartisan resolution warning that an abrupt military withdrawal would be "beneficial to adversaries of the United States government, including Syria, Iran and Russia."

One lawmaker, a retired Arkansas Army National Guard colonel, expressed "grave concerns" about the U.S. pullback, particularly the threat posed by Islamic State prisoners who were left behind.

[Video not showing up above? Click here to watch » https://www.youtube.com/watch?v=0Kb9Hb-6cXA]

It called on Turkish President Recep Tayyip Erdogan "to immediately cease unilateral military action in Northeast Syria"; urged the U.S. to provide humanitarian support to Syrian Kurdish communities; implored the U.S. to "work to ensure that the Turkish military acts with restraint"; and called on the White House "to present a clear and specific plan for the enduring defeat of ISIS."

The White House's announcement on Oct. 6 of an imminent Turkish offensive and its decision to pull U.S. troops from the area resulted in bipartisan condemnation.

The vacuum created by the U.S. withdrawal has been filled by Russian troops and soldiers loyal to Syrian President Bashar Assad.

U.S. calls for a cease-fire have been rejected.

U.S. Rep. Steve Womack, the retired colonel, expressed dissatisfaction with how the conflict had been handled.

"This pullout from Syria troubles me greatly," the lawmaker from Rogers said shortly before the vote.

"I think we've fumbled. I don't think it's a well thought-out decision, and I personally believe it's got some ramifications that do not serve us well in the long term," he said.

Kurds who helped subdue ISIS have accused the U.S. of betrayal.

It's important, Womack said, that U.S. allies have confidence that this nation will follow through on its promises.

"Building coalitions is pretty important in today's global security environment. When America says we're going to be there, we need to be there," he said. "I've just got a lot of concerns. The biggest concern is: 'Does our word mean anything?'"

In a floor speech, U.S. Rep. French Hill accused Trump of "disengaging from Syria without a strategy."

The lawmaker from Little Rock also questioned one of Trump's rationales for the withdrawal.

"A small group of American forces in northeast Syria advising and assisting local forces in order to prevent instability from coming to power does not constitute an 'endless war,'" he said.

Because of the Turkish invasion, U.S. servicemen have been imperiled, Hill said.

"I've been told by experts with contacts on the ground that American lives are at risk directly because of Turkish actions. U.S. forces have been shelled by Turkish artillery. Our NATO ally since 1952, Turkey, who we allowed to conduct this mission, has thanked us by shelling American positions," he added.

With the U.S. pulling back, Syrian Kurds have formed a new alliance with the Assad's regime.

The realignment, Hill warned, could further escalate violence in the region, already torn apart by years of Syrian civil war.

"So now Assad and his Russian backers will bring their bloodbath over the Euphrates [River]. We also put all the gains we made against [ISIS] at risk of reversal," Hill said. "This all could have been avoided."

In an interview, U.S. Rep. Rick Crawford of Jonesboro emphasized the portions of the resolution that condemn Turkey.

Despite voting for the resolution, Crawford suggested criticism of Trump may be premature.

"We still don't know everything," he said.

The president is "not necessarily" turning his back on the Kurds, he said.

"Have we broken faith with our allies? I don't know. I don't know that that's necessarily the case. Is Erdogan a bad guy? Yes, he is a bad guy. Should he be constrained? Yeah, he should be," Crawford said.

There's a lot about Trump's decision-making process that remains unknown, he said.

"I don't think it was communicated as well as it should have been," he said. "I think that's really what caught most people off guard and taken aback by the whole idea that he was doing this."

When possible, congressmen prefer to be kept in the loop, he said.

"You don't want to be caught flat-footed on these issues and not know what's going on," Crawford said. "I think if he had a clearer vision and stated that on the front end and had advised the relevant committees of what was going on, there would have been considerably less furor around this whole decision."

In a written statement after Wednesday's vote, U.S. Rep. Bruce Westerman of Hot Springs made no mention of Trump. He portrayed the resolution, instead, as a condemnation of Turkish actions.

"President Erdogan has made it clear he has no respect for the wishes of NATO allies, and Turkey's unilateral actions against the Kurdish people are unacceptable. This resolution demonstrates that the United States Congress will not condone Turkey's aggression," he said.