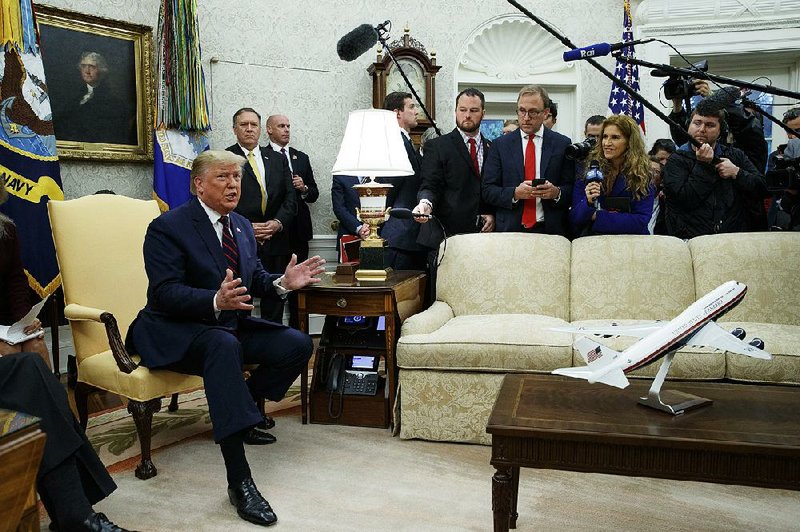 “That has nothing to do with us,” President Donald Trump said Wednesday of Turkey’s offensive against the U.S.’ Kurdish allies in northern Syria. “The Kurds know how to fight, and, as I said, they’re not angels, they’re not angels,” adding that Kurdish fighters intentionally freed some Islamic State prisoners to create a backlash for him. More photos at arkansasonline.com/1017president/

WASHINGTON -- President Donald Trump distanced himself from the conflict between Turkey and America's Kurdish allies in Syria on Wednesday, generating criticism from lawmakers, who rebuked him in a House vote. The day ended with a heated confrontation between Trump and Speaker Nancy Pelosi in the Oval Office.

Trump told reporters that the Turkish assault on Kurdish fighters in northern Syria that began after he pulled out U.S. troops "has nothing to do with us." He declared that the Kurds who battled the Islamic State alongside United States forces for years were "not angels."

Condemnation of Trump's stance on Turkey, Syria and the Kurds was quick from Democrats and Republicans.

House members banded together for a 354-60 denunciation of the U.S. troop withdrawal. Many lawmakers expressed worry that it may lead to revival of the Islamic State as well as increased Russian presence and influence in the area -- in addition to the slaughter of many Kurds.

[Video not showing up above? Click here to watch » https://www.youtube.com/watch?v=YqKS3N0_I1g]

All four members of Arkansas' delegation voted for the measure.

Later Wednesday, Trump engaged in a sharp exchange at the White House with Democratic congressional leaders, who walked out of a meeting, complaining that he had been more offensive to them than any president in modern times.

After the meeting, Pelosi said Trump berated her as "a third-grade politician" -- rather than "third-rate," insisting he had botched the insult -- and that he suggested she would be happy if communists gained influence in the Middle East.

"What we witnessed on the part of the president was a meltdown," Pelosi told reporters after the meeting, saying Trump appeared visibly "shaken up" over the House vote.

"We couldn't continue in the meeting because he was just not relating to the reality of it," she said.

Trump insisted later on Twitter that it was Pelosi who had a "total meltdown," calling her "a very sick person!"

Republicans pushed back, saying it was Pelosi who'd been the problem.

"She storms out of another meeting, trying to make it unproductive," said House GOP leader Kevin McCarthy.

White House spokeswoman Stephanie Grisham called Pelosi's action "baffling but not surprising." She said the speaker "had no intention of listening or contributing to an important meeting on national security issues."

Trump at the meeting also dismissed his former defense secretary, James Mattis, who resigned last year when the president first tried to withdraw troops from Syria. When Sen. Charles Schumer of New York, the Democratic leader, began to cite Mattis, a retired Marine general, the president interjected, calling him "the world's most overrated general," according to a Democrat briefed on the meeting.

"You know why? He wasn't tough enough. I captured ISIS. Mattis said it would take two years. I captured them in one month," Trump said, using an acronym for the Islamic State.

The confrontation with the Democrats came after a series of public appearances where the president attempted to justify his decision to withdraw the small number of U.S. troops from the border who had been serving as a kind of trip wire deterring Turkey from attacking Kurdish forces in northern Syria. The decision to pull out the troops was widely seen as an implicit green light to Turkey, which then launched a powerful offensive against the Kurds.

Speaking to reporters in the Oval Office alongside the visiting president of Italy, Trump said that the U.S. soldiers he had ordered to pull back were no longer in harm's way and that "they shouldn't be as two countries fight over land."

"We paid a lot of money for them to fight with us," he said.

Trump compared one faction of the Kurds to the Islamic State and he asserted that Kurds intentionally freed some Islamic State prisoners to create a backlash for him. "Probably the Kurds let go to make a little bit stronger political impact," he said.

But the president denied that he gave a green light to President Recep Tayyip Erdogan of Turkey during a phone call last week, citing a letter that he wrote a few days afterward.

"History will look upon you favorably if you get this done the right and humane way," Trump said in the letter, which was dated Oct. 9 and obtained by Fox News on Wednesday and confirmed by a White House official. "It will look upon you forever as the devil if good things don't happen. Don't be a tough guy. Don't be a fool! I will call you later."

Trump also dismissed concerns that his decision to pull back had opened the way for Russia, Iran, the Syrian government and the Islamic State to move into the abandoned territory and reassert their influence in the area.

"I wish them all a lot of luck," Trump said of the Russians and Syrians. Warning of a repeat of the disastrous decadelong Soviet war in Afghanistan, he added, "If Russia wants to get involved in Syria, that's really up to them."

The president's comments in the Oval Office and again during a later news conference in the East Room came as Vice President Mike Pence, Secretary of State Mike Pompeo and Robert O'Brien, the president's new national security adviser, were preparing to fly to Turkey in a bid to persuade Erdogan to pull back his offensive.

Late Wednesday, Syrian forces rolled into Kobani, which has a large Kurdish population, blocking one path for the Turkish military after reports that Turkish forces were moving near the town.

Pompeo said he was given a commitment by the Turkish foreign minister, Mevlut Cavusoglu, that troops would not enter the town.

"We need them to stand down, we need a cease-fire, at which point we can begin to put this all back together again," Pompeo said on Fox Business Network.

However, he also said the Trump administration did not want to isolate Turkey, a fellow member of NATO -- a fine line the United States must walk as it issues economic penalties against Erdogan's government.

"Our goal isn't to break the relationship," Pompeo said. "It is to deny Turkey the capacity to continue to engage in this behavior. The president said this was a bad deal, it was a bad thing; we're working to stop it."

Few details about the trip have been released, but the White House said Pence will meet today with Erdogan to deliver the message that the U.S. will "maintain punishing economic sanctions on Turkey until a resolution is reached."

But Erdogan has publicly stated that he will be undeterred by the sanctions and resisted calls for a cease-fire Wednesday, saying the fighting would end only if Kurdish fighters abandoned their weapons and retreated from positions near the Turkish border.

"Our proposal is for the terrorists to lay down their arms, leave their equipment, destroy the traps they have created, and leave the safe zone we designated, as of tonight," Erdogan said. "If this is done, our Operation Peace Spring will end by itself."

In a speech to Parliament, Cavusoglu said Turkey won't be affected by "sanctions and threats." He also said Turkey would "give the appropriate answer to these sanctions."

Turkey has been upset about the Kurdish presence across the border in Syria for years because the U.S.-backed militia has ties to a Kurdish guerrilla group known as the Kurdistan Workers' Party that has waged a decades-long insurgency inside Turkey. Both Turkey and the United States consider it to be a terrorist organization. Turkey fears the Kurdish-controlled part of northern Syria could be used as a base of operations against its territory.

In Washington, Sen. Mitch McConnell of Kentucky, the Republican majority leader, opened his weekly news conference Wednesday by expressing his "gratitude to the Kurds," adding, "I'm sorry that we are where we are."

Sen. Mitt Romney, R-Utah, said that by sending Pence and Pompeo to Turkey, Trump was trying to fix a problem of his own creation, but too late.

"It's very hard to understand why it is the vice president and secretary of state and others are going to talk with Erdogan and Turkey," Romney told reporters. "It's like the farmer who lost all his horses and goes to now shut the barn door."

After Trump said the Turkish-Kurdish conflict was of no interest to the United States, Sen. Lindsey Graham, R-S.C., took to Twitter to castigate the president.

"I hope President Trump is right in his belief that Turkey's invasion of Syria is of no concern to us, abandoning the Kurds won't come back to haunt us, ISIS won't reemerge, and Iran will not fill the vacuum created by this decision," Graham wrote.

"However," he added, "I firmly believe that if President Trump continues to make such statements this will be a disaster worse than President [Barack] Obama's decision to leave Iraq."

Trump pushed back on Graham during his second meeting with reporters, saying that the senator should be focusing on investigating the president's Democratic opponents, including Obama. "The people of South Carolina don't want us to get into a war with Turkey, a NATO member, or with Syria," Trump said. "Let them fight their own wars." 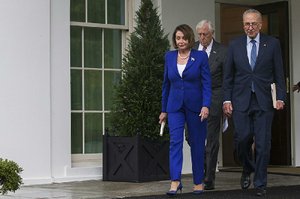 Photo by AP/ALEX BRANDON
House Speaker Nancy Pelosi, Senate Minority Leader Charles Schumer (right) and House Majority Leader Steny Hoyer leave the White House after walking out of a contentious meeting Wednesday with President Donald Trump. “What we witnessed on the part of the president was a meltdown,” Pelosi told reporters, saying Trump appeared visibly “shaken up” over the House vote denouncing his decision to pull U.S. troops out of Syria. House GOP leader Kevin McCarthy faulted Pelosi, saying she was trying to make the meeting “unproductive.” 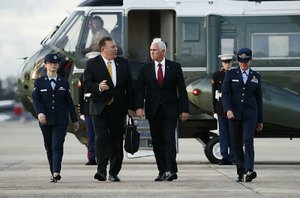 Photo by AP/JACQUELYN MARTIN
Secretary of State Mike Pompeo and Vice President Mike Pence arrive at Andrews Air Force Base, Md., on Wednesday on their way to Turkey to try to persuade Turkish President Recep Tayyip Erdogan to stop the offensive in Syria, possibly using the threat of sanctions. 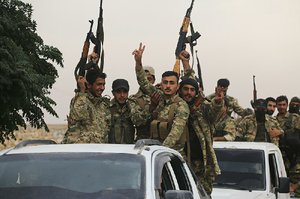 Photo by AP
A column of Turkish-backed Free Syria Army fighters moves toward the Turkish border near the Syrian town of Azaz on Wednesday.