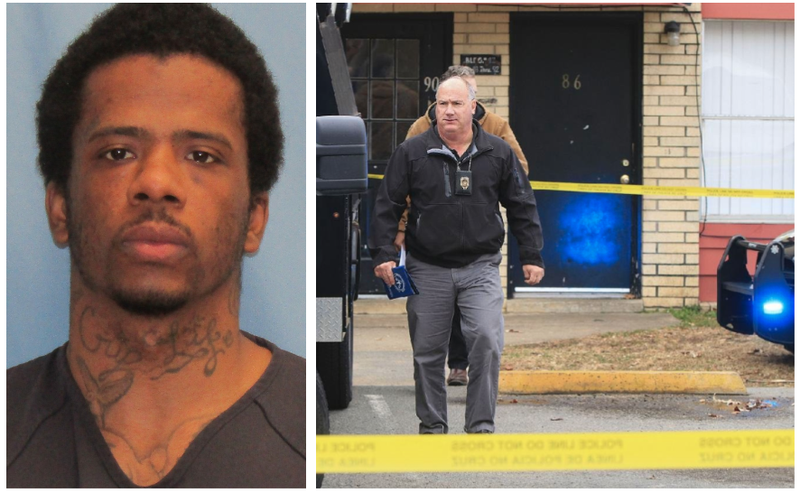 LEFT: Michael Collins is shown in this booking mug from the Pulaski County sheriff's office. RIGHT: A Little Rock police detective leaves an apartment where the bodies of three people, including two young children, were found in the 6600 block of Lancaster Road in this 2017 file photo.

A Pulaski County jury deliberated only 25 minutes Thursday night to find Michael Ivory Collins guilty of capital murder and aggravated robbery for the December 2017 slayings of a Little Rock mother and her two young children.

Collins’ lawyers called no witnesses, presented only one piece of evidence, a chart related to DNA testing, and Collins did not testify.

The case brought by prosecutors John Johnson and Barbara Mariani was purely circumstantial but it was capped by what they called “hard scientific evidence,” the blood of 5-year-old A’Laylaih Fisher, brother Elijah Fisher, 4, and their mother, 24-year-old Mariah Cunningham, that was found on Collins' shoes when authorities caught up to him five days after they had been killed in their Rosewood Apartment home at 6600 Lancaster Road.

Defense attorneys Katherine Streett and Jeff Rosenzweig argued that there was a good chance genetic testing on the shoes had been mishandled and that Collins had their DNA on his footwear because he had briefly lived with the family.

Prosecutors said Collins was the killer and driving force behind the family’s murders, driven by some idea that Cunningham had money. They told jurors his co-defendant, his half-brother, William Burnell Alexander, 23, held Cunningham down while Collins fatally tortured her children to get her to give up any cash. The brothers finally killed Cunningham after she saw her children die, prosecutors said. The only thing the pair got out of the killings was a TV and an X-Box video-game console. The brothers also stole Cunningham’s Honda Accord but abandoned it quickly because the power steering was broken.

The former cellmate of the man accused of decapitating children in Little Rock in front of their mother told a Pulaski County jury Thursday afternoon that the accused killer was haunted by "demons" after the family's deaths.

The cellmate, 47-year-old Marino Bernard Scott, testified for the prosecution in the trial of Michael Ivory Collins, 26, charged with three counts of capital murder.

Collins is accused of fatally stabbing 5-year-old A'Laylaih Fisher and her 4-year-old brother, Elijah Fisher, before he killed their mother, 24-year-old Mariah Cunningham in December 2017.

Scott told the jury he and Collins discussed the crimes over the 30 or so days they shared a cell.

Collins was “paranoid” when he was placed in Scott’s cell, he said, and they got into a fight within a day.

Collins then broke down and told Scott he was charged with three murders and feared the death penalty.

The conversation continued on and off, Scott said, and eventually Collins told his cellmate he and his brother had gone to Cunningham's home hoping to get money.

She said she didn’t have any, so Collins said he began to “punish” her children, according to Scott.

Scott said his cellmate also confided he couldn’t sleep because he was being haunted by demons that had lived within the woman he killed.

Collins also said he was worried about the blood on his shoes taken by police during his arrest, Scott said, and asked if DNA could be taken from them.

Scott said he told his cellmate, yes, it could.

Federal agents found Collins in Chicago with his Adidas sneakers, spattered with the blood of all three victims.

Defense for Collins emphasized that Scott, a convicted felon, had contacted prosecutors about testifying in hopes of getting his own sentence reduced.

The defense also asked if Scott knew whether what Collins said was true.

“I didn’t know if any of it was true,” Scott said.

A Pulaski County sergeant who oversaw Collins when he was in jail also testified. He told jurors that during a disturbance in the jail, Collins screamed at deputies threatening to remove him from his cell that he’d already killed three people — nothing else mattered.

The defense asked the sergeant if it was common to yell things to intimidate deputies, and he agreed.

In speaking with Judge Herb Wright, the defense and prosecution both said they believed they can finish witness testimony from the few who remain by the end of the day.

Collins said he would not testify.