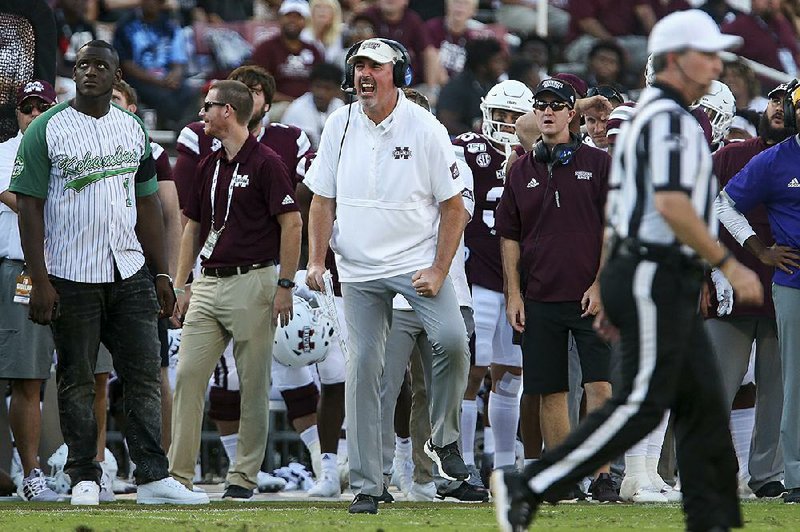 Mississippi State Coach Joe Moorhead, a Pittsburgh native, gave indication this week that he may consider returning East as head coach at Rutgers, where he has been listed as a candidate for the vacant coaching position. “Coaching in the SEC for about a year and a half now in a lot of ways has been a humbling experience,” he said.

Maybe there's some truth to Mississippi State Coach Joe Moorhead being a candidate for the Rutgers job, as some media outlets reported after Chris Ash, a former University of Arkansas assistant coach, was fired as the Scarlet Knights' coach.

On the surface, leaving a Mississippi State program that has made nine consecutive bowl appearances to take on the challenge at Rutgers -- which is 8-33 since 2016 and 3-27 in the Big Ten -- doesn't make much sense.

But reading Moorhead's opening statement as his weekly news conference Monday makes you wonder if the Pittsburgh native, former Fordham head coach and Penn State offensive coordinator might be happier back East.

Moorhead is 11-8 in two seasons at Mississippi State, which is a solid record given the Bulldogs' overall history, but disappointing following Dan Mullen, who led the program to a 69-46 record before leaving for Florida.

The past two games have left a lot of Mississippi State fans upset after Auburn pounded the Bulldogs 56-23 and Tennessee got its first victory over a FBS team this season, 20-10, at Moorhead's expense.

"Coaching in the SEC for about a year and a half now in a lot of ways has been a humbling experience," Moorhead said at his news conference before taking questions. "I don't think you get to the level where I am without a certain level of success and confidence. But this game and the SEC has a way of keeping you honest."

Making the Bulldogs' loss to Tennessee look worse is that they had two weeks to get ready for the game after having an open date.

"At the end of the day, there's no excuse," Moorhead said. "We were outcoached and outplayed with 13 days to prepare.

"We need to, we can and we will be better because our program and our fans deserve it. As the head coach, it's my responsibility that happens. It falls squarely on my shoulders."

It's a far different tone than Moorhead sounded when he took the Mississippi State job and talked about the players needing to know their ring sizes -- for championships, you know? quarterback Nick Fitzgerald -- a senior last season -- needing to find a place to display the Heisman Trophy.

"Nothing means more to me than to bring a consistently successful, championship-level program to Mississippi State," said Moorhead, whose team plays at Arkansas on Nov. 2. "Every waking moment of my life not spent with my family is utilized in an effort to make it happen.

"That's what makes losing games so difficult because of the investment. It's not just a loss, it crushes your soul."

"You know, I was thinking about it -- there's a high school team over in Arkansas, they always onside kick, OK?" Pruitt said. "They never punt.

"You know, we've really kind of considered that as our game plan -- just don't give 'em the ball, you know? If we can do that. I don't know."

Kelley's Bruins are known for going for the first down on fourth down rather than punting and trying to recover their kickoffs rather than hitting the ball deep.

LSU senior quarterback Joe Burrow received player of the week honors for the fourth time this season after he passed for 293 yards and three touchdowns in the Tigers' 42-28 victory over Florida, but he had to share the award with Kentucky junior Lynn Bowden.

Normally a wide receiver, Bowden started at quarterback against Arkansas and had 274 yards total offense and accounted for three touchdowns in Kentucky's 24-20 victory. Bowden rushed 24 times for 196 yards and 2 touchdowns and completed completed 7 of 11 passes for 78 yards and 1 touchdown.

Tyler Ivens, the Knoxville sports radio show co-host who last Monday began staying on the roof of a local Toyota dealership with the promise not to come down until Tennessee won another game, had his confidence in the Volunteers rewarded quickly.

Ivens said he believed Tennessee -- which was 1-4 with its only victory over FCS opponent Tennessee-Chattanooga -- could beat Mississippi State, and the Vols did, 20-10 last Saturday.

Ivens praised the Vols and Coach Jeremy Pruitt after he was able to leave his perch in the building along Interstate 40.

"I'd say this has nothing to do with me," Ivens told the Knoxville News Sentinel. "This has everything to do with the fact that you have to have faith in Jeremy Pruitt, his players and his coaching staff."

Ivens said he never felt alone on the roof.

"Tennessee fans -- we celebrate together, we will go through bad times together," he said. "But, at the end of the day, remember the one goal is to support the people here in Rocky Top."

Mukuamu intercepted Georgia quarterback Jack Fromm three times. He was the first Gamecocks player with three interceptions in a game since Patrick Hinton in 1968 against North Carolina State.

Fromm hadn't thrown any interceptions in the first five games this season.

Alabama has won 12 consecutive games against Tennessee and is favored by five touchdowns to make it 13 in a row.

But don't try telling Crimson Tide Coach Nick Saban that it's no longer a big deal when Alabama plays the Vols.

"There's a lot of fans that have a lot of passion about their school, and when you play in rivalry games, I think, that passion actually heightens.

"I think you hope the passion certainly does that with the players who are participating."

Lane Kiffin, Tennessee's coach in 2009, later became Saban's offensive coordinator at Alabama. Butch Jones, the Vols' coach in 2015, is now an offensive analyst for the Tide.

South Carolina Coach Will Muschamp, 48, has been wearing reading glasses on the sideline during games this season.

"You know what? I'm getting old and I can't read, especially at night," Muschamp told reporters last week. "Had to put my ego on the shelf on these. But my wife is going to buy me a different pair she said."

The glasses often slide down Muschamp's nose, which give him the look of a professor.

In the wake of the Gamecocks' upset victory at Georgia last week, South Carolina will give away what are being called "Professor Muschamp glasses" to students who attend Saturday's home game against Florida.

If form holds, No. 1 Alabama should beat Tennessee 47 to something.

Tennessee Coach Jeremy Pruitt will be the third head coach who was a Saban assistant that Alabama has played this season, and the Tide rang up 47 points on the other two.

Saban is 18-0 overall against head coaches who were his former assistant coaches, including 3-0 against Muschamp and Fisher and 1-0 against Pruitt.

• South Carolina's 20-17 double overtime victory at No. 3 Georgia ended a streak of 11 games in which Gamecocks Coach Will Muschamp had lost to ranked teams. His last victory over a ranked team had been in 2016 when South Carolina beat No. 18 Tennessee 24-21.

• Kentucky's 24-20 victory over Arkansas after trailing 13-0 was the 10th time the Wildcats have won in Coach Mark Stoops seven seasons after they overcame a double-digit deficit.

• LSU averaged 10.6 yards per offensive play against Florida. The Tigers had 511 yards in total offense on 48 snaps.

Jefferson, a junior, has been quarterback Joe Burrow’s favorite target through the first six games this season. Twelve Tigers have at least five receptions, but Jefferson leads the team with 40 catches for 670 yards and 8 touchdowns going into Saturday’s game against Mississippi State. Jefferson is averaging 111.7 receiving yards per game.

No. 9 Florida at South Carolina

Can South Carolina pull off consecutive upsets of top 10 ranked teams? The Gamecocks (3-3, 2-2 SEC) will try to do that when they take on Florida (6-1, 3-1) after knocking off Georgia 20-17 in double overtime between the hedges last week. South Carolina’s offense likely will be bolstered by the return of freshman quarterback Ryan Hilinski, who Coach Will Muschamp said is expected to play against Florida after he was sidelined by a sprained knee at Georgia. Florida, a 4 1/2-point favorite, must shake off the disappointment of last week’s 42-28 loss at LSU and be ready for another hostile road environment, though the fans at Williams-Brice Stadium don’t figure to be as tanked up for an early kickoff as the faithful in Tiger Stadium were on a Saturday night.

No. 11 Auburn at Arkansas

No. 2 LSU at Mississippi State

No. 22 Missouri at Vanderbilt

Kentucky at No. 10 Georgia

Tennessee at No. 1 Alabama

+8 Alabama’s turnover margin this season. The Crimson Tide have 12 takeaways and have lost the ball 4 times.

55.1% LSU’s third-down conversion rate. The Tigers have made first downs on 38 of 69 attempts. 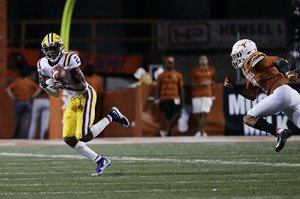 Photo by AP/ERIC GAY
LSU wide receiver Justin Jefferson (2) catches a pass in front of Texas defensive back Caden Sterns (7) and runs for a touchdown during the second half of an NCAA college football game Saturday, Sept. 7, 2019, in Austin, Texas. 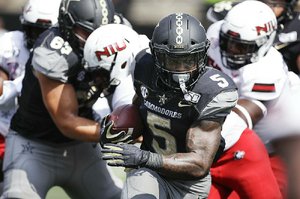 Photo by AP/MARK HUMPHREY
Vanderbilt senior running back Ke’Shawn Vaughn, who has been one of the few bright spots for the Commodores this season, leads the SEC in average yards from scrimmage per game. He has 607 rushing yards and 143 receiving yards, averaging 125.0 yards per game.