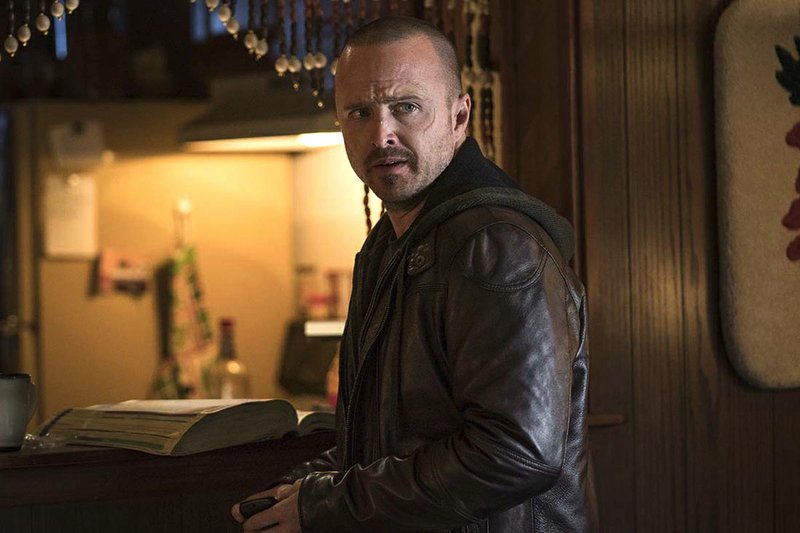 I was initially kind of late to the Breaking Bad phenomenon. I didn't find out about the series everyone was talking about until the last season was already airing. The show became my first Netflix binge, back when the phrase "binge-watch" was first getting going as a thing. As you read this review, keep in mind I'm going to recap some pieces of the series without spoiling the movie.

Through all four seasons on Netflix I raced, as did many Americans, over and over again. It's such an amazing series with so many moments where viewers just make a weird shape with their mouth and go, "Oh ... so awesome." I worked my way through the final season and caught up a day before the finale aired.

I remember the hype was nuts because each of the final six episodes saw a bigger and bigger audience, growing from 2.93 million viewers to 10.28 by the finale. When the finale aired, I was living in Russellville and working on my master's degree in journalism at Arkansas Tech University. My friend Bethany came over to my apartment, and we watched it live, marveling at Vince Gilligan's creation.

For those unfamiliar, the story follows a high school chemistry teacher who develops cancer and turns to making and selling methamphetamine to pay for his treatments. He enlists a former student to help him make and sell it, and together, they build up a massive drug empire. It's some of the most finely written television to ever grace the screen, with terrifying villains, brilliant takedowns and heartbreaking deaths (oh, Hank ...).

When I found out they were making a movie to act as a sequel, I was pretty excited, especially when I saw Vince Gilligan was returning to direct, and Aaron Paul was reprising his character from the show. The movie is called El Camino, and last weekend I finally got to watch it, returning to post-Heisenberg Albuquerque.

Fittingly, it dropped on Netflix, which, let's face it, is where most of Breaking Bad's fans discovered it. The show wasn't popular in the first season, and most fans found it to stream online, then migrated to AMC, which helped keep the show going.

I confess I didn't see El Camino until Saturday morning, but it dropped Friday at some crazy time like 3 a.m. I had to work on Friday, so I didn't wake up early to watch it as lots of fans did. And before the movie came out, I didn't really have any idea what it was about. The trailer didn't reveal much. I'm glad for that. I went in not knowing what to expect, and I left completely satisfied.

Thankfully, the story picks up just seconds after the series finale. And it's like the show didn't miss a beat. Jesse is fleeing the compound as a line of police cars approaches. It immediately sets up the movie for a high degree of tension.

And the Jesse Pinkman we have in El Camino isn't the same one we started off with in season one. He's not a cocky dead-end drug peddler anymore. Now, he's broken after spending most of a season living in a cage being forced to cook meth. He watched the second woman he loved be killed for his escape attempt. The pieces that remain of Pinkman are few and scattered.

The broken man sets up a perfect arc for El Camino, which acts as one last ride through Albuquerque saying goodbye to a number of characters from the show.

Gilligan really transferred everything good from his series into a two-hour movie. The show's trademark cinematography, tense quiet moments and the desperation of a protagonist who just hits hurdle after hurdle in an attempt to survive. And yet, despite this feeling like a longer episode from some hypothetical season six, there was also a feeling the movie was an upgrade. There was just a tad more polish to it.

All I wanted during this movie was for Jesse Pinkman to succeed. I didn't care what he wanted to succeed at. Revenge, escape, riches, dominance, I just wanted him to win. Because the man had been so broken down and dehumanized, I feel like most of the audience was rooting for him to get back something.

I love how El Camino handled its story, too. Because the Breaking Bad timeline can feel a bit screwy sometimes (I mean, people are still using flip phones in the series). So we have Breaking Bad, and then we have a prequel series (which I actually somehow like more) called Better Call Saul that focuses on my favorite character, the sleazy attorney Saul Goodman. And even that story contains some flash forwards to after the Breaking Bad finale.

So now we've got this sequel movie which starts minutes after the series ended and continues on over the next couple of days. But wait! There are several flashbacks in the movie, which serve as great way to give cameos to dead characters. I won't say which ones, though. So it can all be a little confusing to keep together, what's happening when. With that said, I feel like the flashbacks are all necessary and flow well, with the exception of the multi-part one with Todd. That was a little too long.

On Friday morning, I saw some reviews that called El Camino a "waste of time," but those writers are clearly insane. The movie is such a beautiful sendoff for the series. It's a self-contained story that wraps up all the threads I needed it to. It answers the question of "What happened to Jesse Pinkman?"

I recall before the movie, what I wanted for Jesse was the same thing I wanted for Jon Snow before the Game of Thrones finale aired. I just wanted these characters to retire quietly somewhere and live the rest of their lives in peace. Not to worry, I won't spoil either ending for readers. But my demands for closure were few.

Perhaps other reviews were wanting high-octane excitement on par with the exploding grandpa death of Gus Fring or screaming rundown of the clock as Jesse raced to kill Gale. And if those were a reviewer's expectations before seeing El Camino, I can understand how they'd be disappointed.

But the movie had a more low-key touch. I laughed, I smiled and I tensed up, especially during Jesse's Wild West standoff. The film is not devoid of tension or action by any means. It was a fantastic way to say goodbye to the series and tie up the bigger loose ends. Beyond that, I don't think there's much value for any non-Breaking Bad fans to tune in.

El Camino is to Breaking Bad what Serenity was to Firefly. It's one last chance to say goodbye to characters we love and experience their ultimate fates. That's what I wanted from El Camino, and that's what I got. Consider me a happy camper.