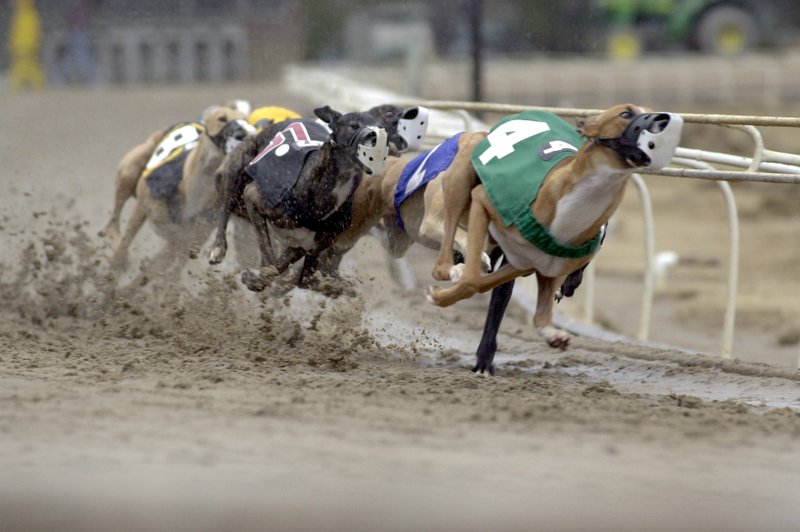 Southland Racing Corp. and the Arkansas Greyhound Kennel Association have reached a pact to gradually phase out live greyhound racing at the West Memphis track by Dec. 31, 2022, an attorney for Southland told the Arkansas Racing Commission on Thursday.

The three-year reduction would allow for an orderly adoption of dogs, according to Southland's attorney.

Live greyhound racing has been going on at Southland since 1956. Southland has about 6,650 races a year, company spokesman Glen White said after the meeting.

In 2018, Florida voters approved a constitutional amendment to end live greyhound racing in their state by 2021. Polling shows a similar ballot measure would be approved in Arkansas, said Stephen R. Lancaster, an attorney who represents Southland Racing Corp.

The seven-member commission, in a voice vote with no dissenters, supported Southland's request to declare that if live greyhound racing ceases, the track will retain its license for Southland Casino Racing, as allowed under Amendment 100 to the Arkansas Constitution.

Shortly after the vote, the president of Oaklawn Racing Casino Resort in Hot Springs announced that he wanted to make it clear there are no plans to end live horse racing.

Amendment 100, approved by voters last November, authorized the expansion of Southland and Oaklawn into full-fledged casinos and the licensing of a new casino apiece in Jefferson and Pope counties. The commission so far has authorized a casino in Jefferson County but not in Pope County.

In contrast, the amount wagered on the state-defined "electronic games of skill" at Southland increased from $311.9 million in fiscal 2008 -- the first full fiscal year that the games were offered -- to $3.2 billion in fiscal 2019. Fiscal 2019 ended June 30.

Lancaster told the Racing Commission that the agreement announced Thursday between the Arkansas Greyhound Association and Southland "really is a reflection of what's going on with greyhound racing around the country.

"It has seen a steep decline over the years," he said. "We are currently at a place where there are only six states in the country that are still conducting greyhound racing, and one of those in 2018, Florida, had an initiated amendment to ban greyhound racing, and that amendment was passed by Florida voters by 69% in favor and only 31% opposed it.

"That was a really wake-up call that this could happen in Arkansas, as well," Lancaster said. "In fact, there has been independent polling done to indicate that if it were to become before Arkansas voters, a ban would be passed."

If Arkansans approved a ban on live greyhound racing, that would be disruptive for Southland and its partners in the kennel association, dog owners, dog breeders and the community, he said.

Southland and the Arkansas Greyhound Kennel Association's agreement to phase out greyhound racing by Dec. 31, 2022, would be less disruptive and add a degree of certainty to Southland, the kennels and the dog owners, and allow an orderly process to adopt out these greyhounds that are now racing at Southland, he said.

The association has 16 members who own and operate kennels with greyhounds that race at Southland.

There will be similar reductions in the number of greyhounds that are registered and kenneled at Southland, he said.

"All of this is designed to make this process as orderly and humane as possible," Lancaster said.

Robert Thorn, president of the Arkansas Greyhound Kennel Association, told the commission that "it has been a long ride," with more than 60 years of live racing.

"But after we saw what happened in Florida and see what is going on with our industry, we feel like now is the time for us to make the decision to have some certainty, and we are 100% behind this," he said.

But the purses for live racing will become more lucrative in the next three years, as revenue rises with the expansion of the casino. Part of the casino's net revenue will go to purses, Lancaster said.

Southland employs about 990 people, according to White.

About 65 employees, including 40 who work full time, would be affected by the end of live racing, but Southland will be adding more than 400 jobs in the next 18-24 months with the casino expansion, Wolf said.

"So all these employees will be able to transfer anytime they want and [be] given the necessary training," Wolf said.

Lancaster said Southland officials expect to continue to hold the park's casino license after the track stops live racing and be regulated like the other nonracing license holders in Jefferson County and potentially Pope County.

"We would like a determination from the Racing Commission that what we are doing passes muster in terms of the amendment and the rules," he said.

Racing Commissioner Denny East of Marion praised Southland and the association for reaching a pact to phase out live racing in an orderly fashion.

"It takes a little weight off a lot of shoulders," he said.

Lancaster said the coming end "is definitely bittersweet, but it is something whose time had come."

Byron Freeland, an attorney for the Racing Commission, said there are no legal impediments to the track continuing to hold a casino license when racing ends.

"We did run this by other parties, such as legal authorities for the state government, and no one disagreed with that interpretation," he said.

"Under the amendment it appears if they cease greyhound racing that will be treated just like a casino in Pope County or Jefferson County or any other casino," Freeland said.

Under Amendment 100, a casino's net gambling receipts are taxed at 13% on the first $150 million and 20% above that amount. Of the tax revenue, 55% goes to state general revenue and 17.5% to the Racing Commission for purses. Eight percent of the receipts will go the county and 19.5% to the city. If a casino is not in a city, then all of the local tax receipts go to the county.

Freeland said it appears that the commission's share of the tax revenue from casino gambling would all go to Oaklawn if greyhound racing ends, "so there will be some issues like that that might have been decided in the future in the next couple of years."

Louis Cella, president of Oaklawn Racing Casino Resort in Hot Springs, said in a news release that "racing has been Oaklawn's DNA for 115 years and I plan to continue the legacy my family began in 1904.

"As the fourth generation of my family to be at the helm of Oaklawn, I can unequivocally state we are completely dedicated to the great sport of thoroughbred racing," he said.

Cella said, "our goal is for Oaklawn to become a destination casino and resort that ensures our status as the number one tourism attraction in Arkansas.

"And, at the very center of the entire enterprise will be one of the premier racing programs in all of North America," he said.

Gov. Asa Hutchinson, a Republican, said in a written statement, "I'm pleased that Southland and the Arkansas Greyhound Kennel Association were able to reach a mutually beneficial agreement and I applaud the Racing Commission's approval of the terms."

Carey Theil, executive director of Grey2K USA Worldwide, an anti-dog-racing group based in Massachusetts, said in an interview that his group was considering a ballot measure to ban greyhound racing in Arkansas for the 2020 or 2022 election cycle and that polling showed that the measure would pass easily.

He said Southland should be applauded for what he called a "responsible phaseout." He also noted that this is the first significant blow to the dog racing industry since Florida voters approved an eventual ban in 2018.

"This is a victory for everyone who cares about dogs. That's number one," Theil said. "Number two, this is the moment that it's clear greyhound racing is going to end in the United States."

Theil said there are about 1,000 greyhounds now at Southland. By giving the track three years to end operations, dogs, employees and other stakeholders will have adequate time to make proper arrangements.

Wayne Pacelle, founder of Animal Well Action, said in a news release that "we applaud Southland and its parent company Delaware North for getting this deal over the finish line."

Outside of Florida, there are a handful of tracks operating in the U.S., he said in a news release. Tracks in Alabama, Iowa and Texas are barely hanging on, he said. Delaware North owns two tracks in West Virginia, and the agreement in Arkansas should be an indicator that the company wants out of this business in order to emphasize other gambling activities, he said.

"It is our hope that Delaware North works out a similar agreement with greyhound breeders and other key stakeholders in West Virginia," Pacelle said. "West Virginia does not want to be the last place in the United States with regular racing that put greyhounds at risk."