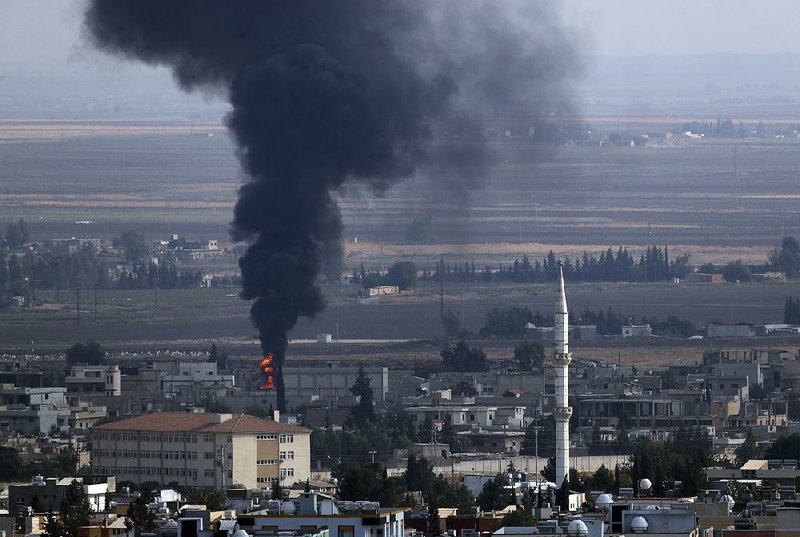 Smoke billows from a fire Friday in Ras al-Ayn, Syria, after fighting broke out that morning in the town on the border with Turkey, despite a cease-fire that went into effect the night before.

ISTANBUL -- President Recep Tayyip Erdogan warned Friday that Turkey's military offensive would resume within days if Kurdish fighters do not fully withdraw from a "safe zone," even as ongoing violence in at least one Syrian border town imperiled a cease-fire brokered by the United States.

"If the U.S. can keep its promise made to us, at the end of the 120 hours, the issue of the safe zone will be resolved," Erdogan told a gathering of foreign news media in Istanbul, referring to the length of a pause in the offensive agreed upon by Turkey and the United States on Thursday.

"If the promises are not kept," he added, "our operation is going to continue from where we left off."

Turkey agreed to pause its eight-day military operation after Vice President Mike Pence led a U.S. delegation to Ankara on Thursday and met with Erdogan and other Turkish officials. The 13-point deal they hammered out envisions a permanent halt to the offensive after 120 hours -- or five days -- if Syrian Kurdish militias, known as the Syrian Democratic Forces, withdraw from an area of northern Syria that Turkey refers to as a "safe zone."

As fighting eased Friday, Kurdish forces began pulling out of a 20-mile buffer zone in northern Syria, Turkish and American officials said, signaling that the cease-fire was going into effect.

[Video not showing up above? Click here to watch » https://www.youtube.com/watch?v=jRBu6Mk6ehg]

Earlier in the day, the Kurdish leadership accused the Turkish military and its proxies of violating the terms of the truce, even as Erdogan denied that any fighting was continuing.

Journalists just across the border in Turkey on Friday morning and afternoon could hear gunfire and artillery in the Syrian border town of Ras al-Ayn, the scene of the heaviest fighting for the past few days. But the town stood silent by Friday evening.

Erdogan hailed the Syrian Kurdish withdrawal as a victory over a "terrorist organization," and said Turkey would establish 12 observation points in the buffer zone along a 250-mile stretch of the border east of the Euphrates River.

Turkey views the Syrian Kurdish militias as terrorists because of their ties to the insurgent Kurdistan Workers' Party in Turkey. The "safe zone" proposal is aimed at pushing the militias farther away from Turkey and creating an area where Turkey proposes to resettle hundreds of thousands of Syrian refugees.

The cease-fire agreement amounted to a victory for Erdogan, who enlisted the Trump administration to withdraw the Syrian Kurds on Turkey's behalf after years of quibbling with the United States about whether a "safe zone" would exist at all.

But Mervan Qamishlo, a spokesman for the Syrian Democratic Forces, said Friday that it was not withdrawing yet from the buffer zone "because the Turkish side has not yet committed to the agreement" and was still bombing the border town, Ras al-Ayn, including the town's hospital.

Some fighters have vowed not to withdraw, calling the accord an "insult to Kurdish dignity" and tantamount to a surrender arranged by the U.S., the former ally they accused of abandoning them to the Turkish assault.

Kurdish leaders said some provisions of the cease-fire deal "need further discussion with the United States," though it did not specify what. A senior Kurdish politician, Ilham Ahmed, was due in Washington over the weekend to meet U.S. officials.

Smoke could be seen rising from Ras al-Ayn in footage broadcast by CNN early Friday. Journalists for The Associated Press reported shelling and the sound of gunfire.

President Donald Trump, in a tweet Friday afternoon, said Erdogan told him in a phone call that "there was minor sniper and mortar fire that was quickly eliminated." Trump added: "He very much wants the ceasefire, or pause, to work."

The National Army, a Turkish-backed umbrella group that united Syrian rebel factions ahead of the offensive, also denied that there was any fighting or shelling in Ras al-Ayn.

A civilian near Ras al-Ayn said the bombardment continued through the night and into Friday morning. "There have been no airstrikes so far, but neither the bombardment nor the clashes have ceased," he said in a telephone interview, declining to give his name for security reasons. "We are among the few dozens of families that have stayed in the area, but we have our car ready and we may still leave, despite the cease-fire."

In a separate phone interview Friday evening, Qamishlo said the clashes were "less severe at the moment, but they haven't altogether ceased." He said "there have been no signs of an actual cease-fire."

Even so, Trump insisted that peace was at hand.

Trump, who hailed the cease-fire agreement Thursday as a victory for all parties involved, said on Twitter Friday that "big progress being made" to resolving tensions in the region.

"There is a cease-fire or a pause or whatever you want to call it," he said. "There was some sniper fire this morning," as well as mortar fire, but that was quickly halted and the area had returned to a "full pause," he said.

Trump also asserted that some European nations are now willing to take responsibility for detained Islamic State fighters who are from their countries.

Calling his Syria approach "a little bit unconventional," the president contended that Erdogan as well as the Syrian Kurdish fighters that the Turks are battling agree that the U.S.-brokered cease-fire was the right step and were complying with it.

"There is good will on both sides & a really good chance for success," he wrote on Twitter.

European Union Council President Donald Tusk said the situation was "not a cease-fire, it is a demand for the capitulation of the Kurds" and called on Turkey to immediately halt its operation in northeast Syria. French President Emmanuel Macron called the Turkish operation "madness."

The U.S. pullout from northeastern Syria has positioned Russia as the main power broker.

Erdogan is to meet Russian President Vladimir Putin in Sochi, Russia, on Tuesday, the day the halt in fighting is set to expire.

At the Pentagon, Defense Secretary Mark Esper said U.S. troops are continuing their withdrawal from northern Syria. He also said no U.S. ground troops will participate in enforcing or monitoring the cease-fire.

"The force protection of our service members remains our top priority and, as always, U.S. forces will defend themselves from any threat as we complete our withdrawal from the area," Esper told reporters.

Trump has been widely criticized for turning his back on the Kurds, who have taken heavy casualties as partners with the U.S. since 2016. Even some Republicans are criticizing him.

Erdogan said Friday that he and Trump share "love and respect," but he also left little doubt that he was offended by an Oct. 9 letter from Trump telling him, "Don't be a fool!"

He accused Trump of having broken with "diplomatic and political courtesy" by sending him a letter threatening to destroy the Turkish economy if he did not behave in "the right and humane way" in Syria.

He went on to encourage Erdogan not to act rashly.

Erdogan told reporters Trump's words were not compatible with "political and diplomatic courtesy" and would not be forgotten. He said he would "do what's necessary" about the letter "when the time comes." He did not elaborate.

Several unresolved issues remain. The agreement between the United States and Turkey does not include the Syrian government or Russia, Syrian President Bashar al-Assad's most important backer. With Russia's help, Syria is desperate to reclaim all the territory it lost during the country's eight-year civil war, including hundreds of miles along Turkey's border.

It also was not clear that Turkey and the United States, despite their deal, agreed on the definition of the safe zone. Its size was not spelled out in the 13-point agreement that both governments released Thursday. U.S. and Turkish officials seem to agree that it will extend about 20 miles south of the Turkish border, but its width is less clear.

Erdogan said Friday that the area stretched for 275 miles, from Jarabulus to the Iraqi border. He also said in a speech that Turkish troops had captured around 850 square miles of Syrian territory.

James Jeffrey, the State Department's Syria envoy, appeared to suggest that the safe zone was meant to be far narrower. Speaking to reporters after the deal was concluded Thursday, he said the safe zone was "in a central part of the northeast."

"The Turkish army has seized a great deal of territory in a very short period of time," Jeffrey added, explaining why the deal was important. "We had no doubt whatsoever" that Turkish forces would "continue seizing territory if we couldn't get a cease-fire," he said.

"There's no doubt that the YPG wishes that they could stay in these areas," Jeffrey added, referring to the Syrian Kurdish militias.

Erdogan said Friday that Turkey did not intend to keep its forces in Syria "forever."

"Not at all," he said. "What we want is to make sure this area is cleared of terrorist elements, and at least 1 million refugees in Turkey can return to their own villages." 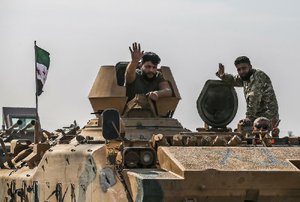 Photo by AP/EMRAH GUREL
Turkish-backed Syrian opposition fighters on an armored personnel carrier wave Friday as they cross the border into Syria in Akcakale, Turkey.