Little Rock Catholic traveled north of the Arkansas River and dominated North Little Rock in the second half.

The Rockets, who also forced three turnovers, snapped the Charging Wildcats' 30-game conference winning streak, which included 2015 with North Little Rock playing in the 7A/6A-East, and the 7A-Central from 2016 to this season. North Little Rock's last conference loss was Sept. 25, 2015, to Cabot in Coach Jamie Mitchell's first season with the program.

"This conference is so good," Catholic Coach John Fogleman said. "Any given Friday night, anybody can beat anybody. North Little Rock is a good football team. But we're obviously happy with the win."

North Little Rock was outscored 20-0 in the second half and turned the ball over three times.

"We got our tails whipped," Mitchell said. "They were better tonight than we were. They deserve all the credit in the world. You turn the ball over three times, you can't do that.

"They outplayed us in the second half, there's no sugar-coating that."

Catholic (5-2) moved into a three-way tie for second place in the 7A-Central at 3-1 with North Little Rock and Conway.

"It's a big win," Edington said. "We've got a lot of good teams left to play. We'll see what we can do and see if we can get a good playoff spot."

Edington completed 9 of 17 passes for 203 yards with 3 touchdowns and no interceptions. He also rushed for 70 yards on 11 carries.

Senior Brian Alsbrook had 137 yards and 2 touchdowns on 28 carries for the Rockets, who rushed for 231 yards.

Senior running back Brandon Thomas, who missed last week's game at Fort Smith Southside because of a knee injury, came back Friday and led North Little Rock (4-3) offensively. He finished with 161 yards and 2 touchdowns on 19 carries, scoring on runs of 2 and 56 yards, both in the first half.

Fredrick O'Donald, a junior, had a 41-yard touchdown run in the first half after missing the past two Charging Wildcats games with a high ankle sprain.

Catholic trailed 21-14 with less than a minute remaining in the second quarter. With 25 seconds left before halftime, Edington found senior Nathan Johnson (4 receptions, 113 yards) for a 12-yard touchdown to tie the game at 21-21.

It was all Rockets after halftime.

The Charging Wildcats drove to the Rockets' 12 on their next drive, but Cotton fumbled at the Rockets' 11 and Catholic junior free safety Thomas Fitz returned it 85 yards for a touchdown to make the score 34-21 with 1:59 left in the third quarter.

With 11:06 left in the fourth quarter, senior free safety Grant Smithson intercepted Cotton at the Rockets' 5. Catholic sealed the victory with a seven-play, 95-yard drive that resulted in Alsbrook running untouched into the end zone for a 7-yard touchdown run to extend the lead to 41-21 with 7:11 remaining.

For Fogleman, the Rockets' second-half success happened because of their touchdown drive late in the first half.

"That gave us momentum, and it carried over," Fogleman said. "It was a great win." 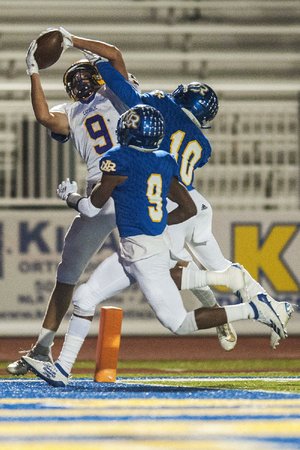