Perry says gas was top focus with Ukraine; he misses deadline to give subpoenaed files to panel 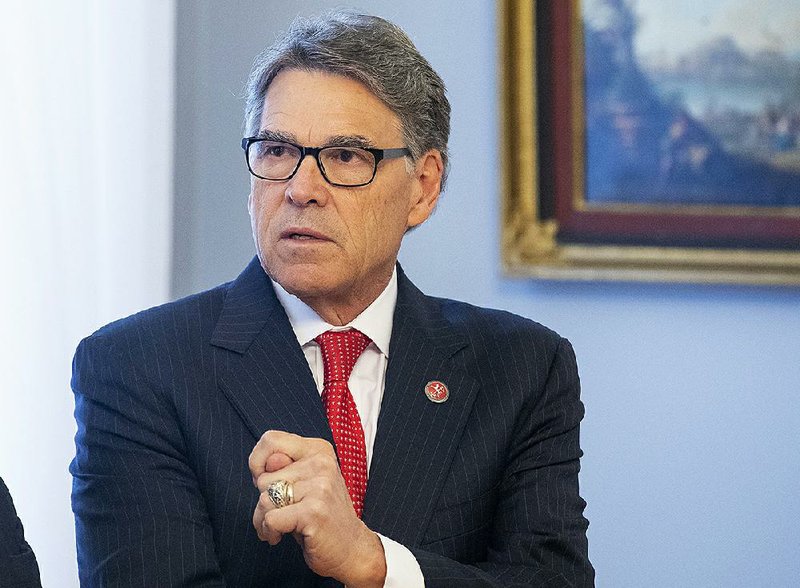 WASHINGTON -- Energy Secretary Rick Perry missed a Friday deadline to produce subpoenaed documents relevant to an ongoing impeachment inquiry into whether President Donald Trump orchestrated an effort to pressure Ukraine to dig up dirt on a potential 2020 political rival.

Perry, who has previously said his planned end-of-the-year departure from the administration has "absolutely nothing" to do with the Ukraine controversy, said Friday in an interview with Bloomberg News that his work with Ukraine was focused on ensuring that Ukraine wasn't held "hostage" by Russian gas -- an effort he said has been ongoing for more than two years, even when former Ukraine President Petro Poroshenko was in charge.

Perry insisted that the Bidens never came up in his conversations with Ukraine officials, though discussions about government corruption were a mainstay.

"We heard corruption in almost every conversation that we had talking about Ukraine and whether or not President Zelenskiy was going to come over here, because President Trump wasn't going to send American money to a country that had a history of being corrupt," Perry said. "And he was hammering that, and we hammered that."

Perry initially said he wasn't sure whether he would comply with the House subpoena and deferred to his counsel.

In a letter to House Democrats, Energy Department Assistant Secretary Melissa Burnison argued that the impeachment inquiry is illegitimate, adding that the House has not adopted a resolution authorizing an investigation.

"Even if the inquiry was validly authorized, much of the information sought in the subpoena appears to consist of confidential Executive Branch communications that are potentially protected by privilege and would require careful review to ensure that no such information is improperly disclosed," Burnison wrote.

Burnison also reiterated Trump's position that the inquiry "lacks any legitimate constitutional foundation, any pretense of fairness or even the most elementary due process protections."

Separately Friday, Trump and his Republican allies seized on a news report that a career State Department official overseeing Ukraine policy told congressional investigators this week that he had raised concerns in early 2015 about Biden's son serving on the board of a Ukrainian energy company.

The report Friday in The Washington Post cited by Republicans said that George Kent, a deputy assistant secretary of state, testified Tuesday that he worried that Hunter Biden's position at the firm Burisma Holdings would complicate efforts by U.S. diplomats to convey to Ukrainian officials the importance of avoiding conflicts of interest.

The Republican effort to highlight the report came as fractures appeared in the GOP firewall of support for Trump.

U.S. Rep. Francis Rooney, R-Fla., said he couldn't rule out voting to impeach Trump and said he's had Watergate on his mind.

Rooney's comments echoed those of Democrats abuzz about White House acting Chief of Staff Mick Mulvaney's acknowledgment at a Thursday news conference that Trump withheld nearly $400 million in military aid in part to pressure Ukraine to pursue an investigation that could benefit him politically. The White House later scrambled to walk back Mulvaney's comments.

"I was shocked that he said that stuff," Rooney said Friday. "When the president has said many times there wasn't a quid pro quo ... and now Mick Mulvaney goes up and says, 'Yeah, it was all part of the whole plan!'"

As for the political consequences of possibly voting for Trump's impeachment, Rooney said, "I didn't take this job to keep it. ... I took this job to do the right thing at all times."

Speaking to reporters Thursday, Mulvaney essentially acknowledged a quid pro quo with Ukraine that Trump has long denied, saying U.S. aid was withheld from Kyiv to push for an investigation of the Democratic National Committee and the 2016 election. He told reporters that the president was demanding that Ukraine end government corruption, adding "Did he also mention to in passing the corruption related to the DNC server? Absolutely. No question about that."

Mulvaney later clarified his remarks to say they had been "misconstrued" and denied any connection between the aid money being withheld and demands for a specific investigation.

Trump, who declined an opportunity to explain Mulvaney's comments to reporters Friday, appeared satisfied with Mulvaney's clarification. The president again dismissed the entire House inquiry as "a terrible witch hunt. This is so bad for our country."

In that July call, Trump asked the newly elected Zelenskiy for a "favor" in investigating the Democratic National Committee's email situation, which was central to the 2016 election, as well as the Ukraine gas company, Burisma, which was linked to the family of Biden, one of Trump's 2020 Democratic rivals, according to a rough memo released by the White House outlining the phone conversation.

Republican leaders tried Friday to align with Trump, amid their own mixed messages, as House Democrats, who already issued a subpoena to Mulvaney for documents, now want to hear directly from him.

U.S. Rep. Kevin McCarthy, the House GOP leader, cited Mulvaney's clarification as evidence that there was no quid pro quo. He said witnesses have also testified similarly in private in the impeachment inquiry.

"We've been very clear," McCarthy said. "There was no quid pro quo."

Taylor, in text messages with two other U.S. diplomats, raised alarms about the White House holding back military aid to Ukraine, calling it "crazy to withhold security assistance for help with a political campaign."

On Wednesday, lawmakers are expected to hear from Ambassador Philip Reeker, acting assistant secretary for European and Eurasian affairs, and Michael Duffey, associate director of national security programs at the Office of Management and Budget. Duffey's signature was on the letters reapportioning the Ukraine aid.

Also, a deposition planned for Friday of a senior career official at the Defense Department was postponed until next Thursday. House investigators expect Laura Cooper to provide details about the nearly $400 million in military aid that was withheld from Ukraine.

Cooper, deputy assistant secretary of defense whose portfolio includes Russia and Ukraine, and Lt. Col. Alexander Vindman, director of European Affairs on the National Security Council, are expected to testify about the delay.

It's unclear whether all of the witnesses will appear, given that the White House is opposing the inquiry and trying to block officials from testifying.

Information for this article was contributed by John Wagner, Colby Itkowitz, Michael Brice-Saddle and Karoun Demirjian of The Washington Post; by Jennifer A. Dlouhy of Bloomberg News; and by Lisa Mascaro, Andrew Taylor and Mary Clare Jalonick of The Associated Press