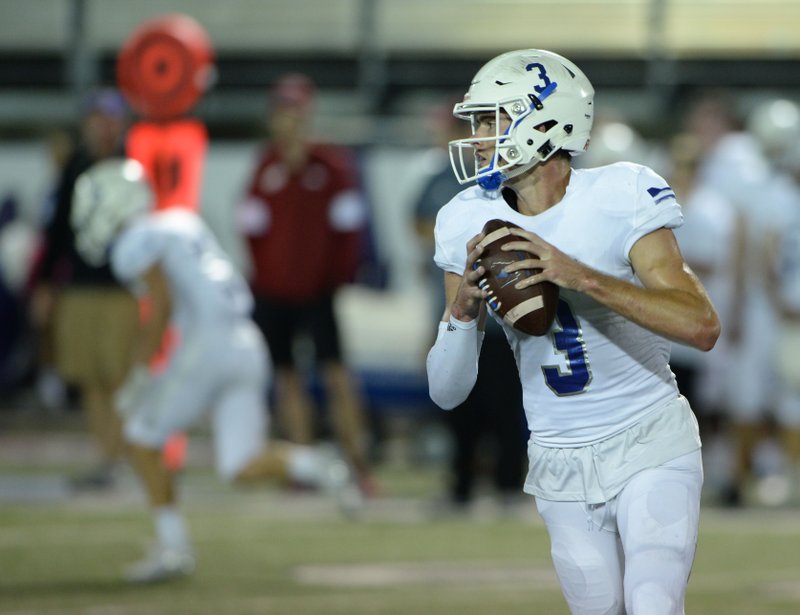 Rogers quarterback Hunter Loyd rolls out to pass Friday, Oct. 4, 2019, during the first half of play against Fayetteville at Harmon Stadium in Fayetteville. Visit nwadg.com/photos to see more photographs from the game and the homecoming ceremony. ( Andy Shupe)

SPRINGDALE -- It would have been really easy for Rogers High to just accept that things weren't going its way yet again when Springdale took a lead late in the third quarter on Friday at Jarrell Williams Bulldog Stadium.

The Mounties had other ideas, however, using a pair of touchdown passes from Hunter Loyd in the fourth quarter and intercepted Red'Dog quarterback Connor Hutchins with 2 minutes, 41 seconds remaining to seal their first win of the season, 27-17.

"We had a tough nondistrict and these kids just kept battling," Rogers coach Mike Loyd said. "They were resilient and worked their tails off in practice, and even though we were 0-6, I told them they were some of the best kids I've ever been around. They deserve something good to happen to them."

The win keeps Rogers alive in the Class 7A playoff picture, with just three weeks left in the regular season.

"It's just a big monkey off our back, man," Loyd said. "We played three athletic teams before conference and our defense has managed to get a lot better. A lot of guys have been forced into action the last three or four weeks and probably didn't think they were going to get to play until next year."

Rogers (1-6, 1-3) got a sterling performance from quarterback Hunter Loyd as the senior threw for 337 yards on 28 of 37 passing with the two touchdowns.

"He's a good player and he had a good game tonight," Loyd said of his son. "The guys up front did a good job as well and the guys did a good job catching the ball and executing our offense."

Springdale was ahead 17-14 going into the fourth quarter but was unable to finish a drive off with points. Rogers retook the lead, then blocked a punt that led to Loyd's game-sealing touchdown pass to Christian Francisco with just under five minutes left.

Hutchins led the Red'Dogs (3-4, 1-3) down the field again, but was picked off by Jordan McKibbon on fourth down.

"Our kids have made the playoffs three years in a row, and I don't think any Rogers team has done that, even before the split," Loyd said. "Getting this first one was huge and getting it on the road was even better."

Springdale running back Gilberto Dominguez ran 20 times for 97 yards and also caught a 24-yard pass on the Red'Dogs' final drive. LaDarius Wonsley was held to four catches for only 26 yards.

• The play clock was not functional in the first quarter, so it was kept on the field by officials.

• Springdale honored its 1989 state championship team before the game and its members in attendance served as honorary captains.

• Hutchins took his first sack of the season late in the fourth quarter.