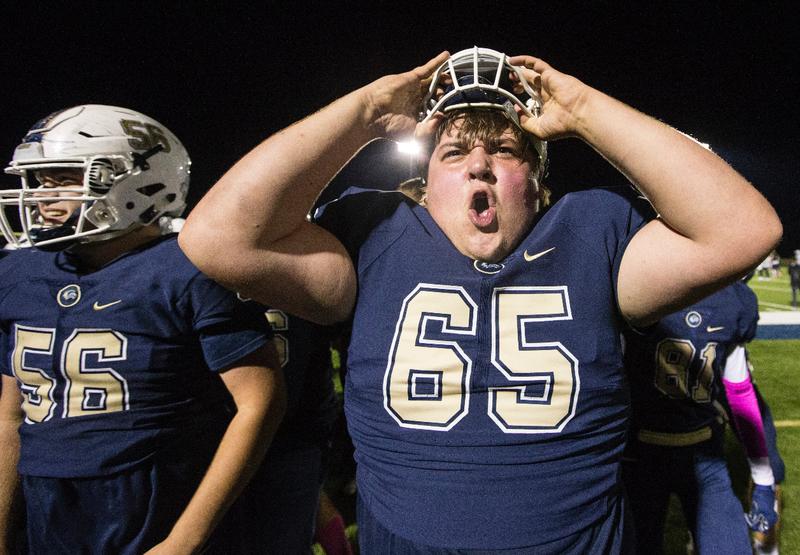 CENTERTON -- Maddox Thornton knew there was no need to go for an interception Friday night.

Bentonville West's senior defensive back just knew he couldn't let anybody catch the ball as the final play transpired.

Thornton leaped in front of Springdale Har-Ber receiver Hunter Wood in the back of the end zone and knocked the ball down as time expired, allowing West to hold on for a 24-20 victory in a key 7A-West Conference game at Wolverine Stadium.

"I saw the quarterback rolling out, saw him throw it up," Thornton said. "I was thinking to get the ball on the ground. If I get it on the ground, we get the win. I wasn't even thinking about picking it. I didn't know he was there. I was just in the moment."

Nick Whitlatch's third touchdown of the game, a 3-yard run, gave West (5-2, 4-0 7A-West) a 24-20 lead with 5 minutes, 33 seconds remaining. Har-Ber started on its 20 following a touchback on the kickoff and drove to the Wolverines' 12 in 11 plays, with tailback Max Pena carrying the ball seven times.

West's defense, however, rose to the occasion. Linebacker Andrew Trader went into the backfield and dropped Har-Ber quarterback Blaise Wittschen for an 8-yard loss to the Wolverines' 20, and that forced the Wildcats to burn their final timeout with 41 seconds remaining.

"We had some kids with injuries," West coach Bryan Pratt said. "Jonas (Higson) was out, and Nick was about 70-75 percent. We just kept putting other guys in there, and they kept making plays.

"I didn't even know who got the quarterback sack. That was a big play, and I was just hoping we're going to get something because they're already down there. For our kids to continue to battle, I couldn't be prouder of the way they played."

Har-Ber picked up 13 yards on the next play as Wittschen hit Jay Burns with a sideline pass and stopped the clock. West was also flagged for defensive holding, but the Wildcats chose the play instead of the penalty and opted for third-and-5 from the 7 instead of second-and-10 from the 10.

Har-Ber went to the ground game one more time, but Pena was dropped for a yard loss and caused fourth down. With time winding down, Wittschen rolled to his right before he threw toward the goal post, but Thornton was right there to end the scoring threat.

"It was two good ballclubs, and it came down to the final play," Har-Ber coach Chris Wood said. "We just came up a little bit short.

"We had more to gain on that pass instead of the penalty. We still had two plays left and about 20-something seconds. The extra down wouldn't help with time winding down. We came in on the next play and tried to run the power, and they did a good job, stoned up in the middle."

• Whitlatch, the 7A-West's second-leading rusher, moved much closer to conference leader Jay Burns of Har-Ber after Friday's game. Whitlatch finished with 168 yards on 24 carries and had all three Wolverines touchdowns on runs of 62, 1 and 3 yards.

• Burns started the scoring with a 60-yard pass reception, and it was his 2-yard touchdown run that gave Har-Ber a 20-17 lead after Liem Taylor intercepted a pass and returned it 55 yards to the West 3. Burns, however, was held to 36 yards on 15 carries.

• Har-Ber returns to 7A-West action next week as the Wildcats travel to Van Buren. West will be at home against next week against Rogers Heritage.