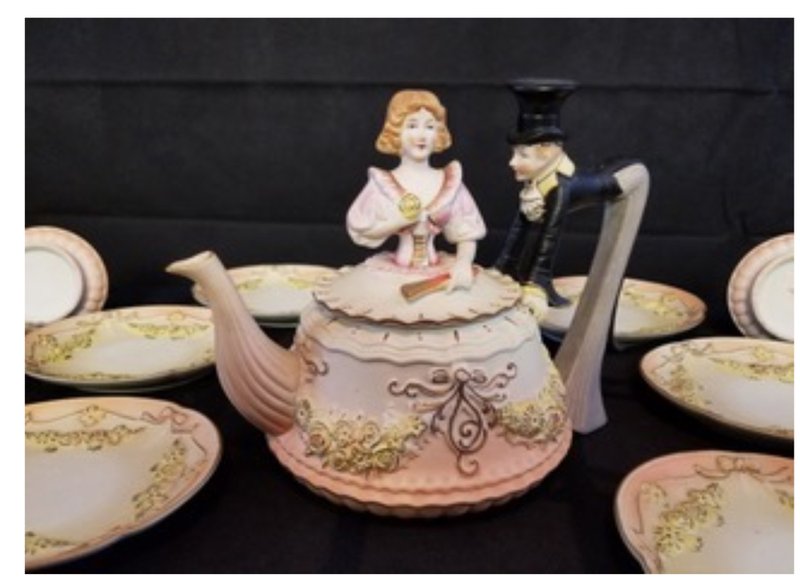 TNS handout This is a Japanese interpretation of a German design.

DEAR HELAINE AND JOE: My mother passed on to me the tea set shown in the attached photographs. It is marked "Shofu China." It is in mint condition and has lived in our china cabinet for more than 50 years. I would like to learn more about it and its value. Can you help me?

Yes, this partial tea set, which consists of a teapot and six cups and saucers, is indeed curious. If it were marked with the numbers 3867 on the teapot and 3847 on the cups and saucers, we would know they were made by the Schafer and Vater Co. of Rudolstadt, Thuringia, Germany.

Founded in 1890 and in business until the early 1960s, the company was famous for its figural work and a type of pottery called German Jasperware. This type of ware is a bisque porcelain, usually with a colored background and raised decorations in one or more contrasting colors.

In the 1930s, Schafer and Vater introduced their Mad Hatter tea set, which was based on characters in Lewis Carroll's Alice's Adventures in Wonderland. The tea party is found in Chapter 7 and features Alice, the Mad Hatter, the March Hare and the Dormouse.

The Schafer and Vater tea set features only the Mad Hatter and Alice, with the former in his top hat and the latter in a ruffled top with balloon sleeves and a tall ribbon/bow on top of her head. The tea set is usually found in pink and green German Jasperware.

The set belonging to P.H. is very similar to this. One glaring exception is the bow is missing from Alice's hair. In any event, it is marked "Shofu China" inside a shaped red reserve. There is little history we could find about this company beyond that they were (are?) located in Nagoya, Japan. Their products can be found marked "Nippon" (1891-1921) and "Made in Japan" or just "Japan" (post-1921). Shofu China wares are also found marked "Made in Occupied Japan," which was a designation in use from 1945 to 1952.

We feel the Mad Hatter tea set in today's question is a copy of the Schafer and Vater set and must have been made after the 1930s. Our guess is the set is post-WWII, circa 1950. But it is still a very uncommon set.

Schafer and Vater Mad Hatter tea sets sell at auction in the $475 to $700 range, but we believe because this set is a copy, it might sell for a bit less.

(Note: We found other Japanese copies of this design that had strayed a little farther from the original but were still recognizable as Schafer and Vater Mad Hatter-inspired.)

Helaine Fendelman and Joe Rosson have written several books on antiques. Do you have an item you'd like to know more about? Contact Joe Rosson, 2504 Seymour Ave., Knoxville, TN 37917, or email treasures@knology.net. If you'd like your question to be considered for their column, please include a focused, high-resolution photo of the subject with your inquiry.