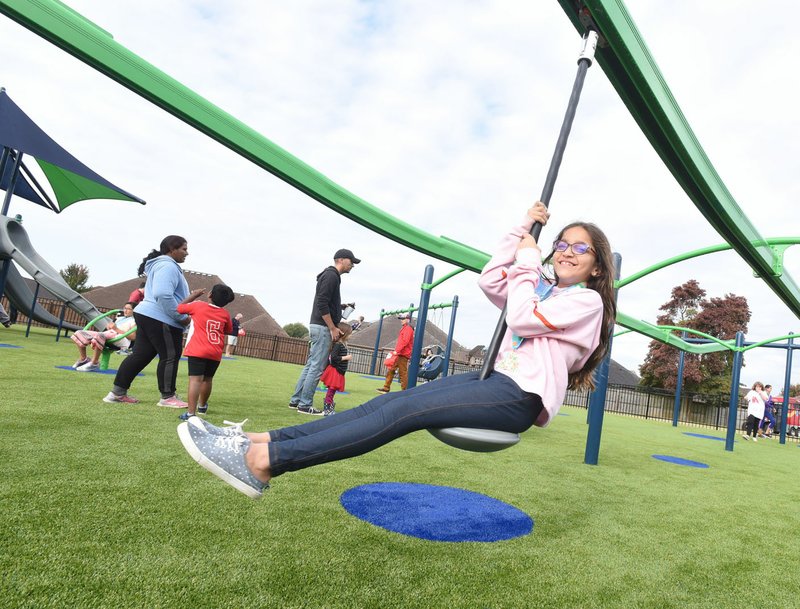 NWA Democrat-Gazette/FLIP PUTTHOFF Noor Adeel, 8, swings on a ride Saturday during the opening of Citizens Park's inclusive playground at the Bentonville Community Center. The playground is designed so children of all abilities can play together, said David Wright, Parks and Recreation director.

The Citizens Park Playground, 1101 S.W. Citizens Circle, is the final amenity to be built at the park, said David Wright, Parks and Recreation director.

The 8,000-square-foot playground cost about $435,000 to build and is a unique feature for Bentonville parks, he said.

All other parks in the city are also compliant with the Americans with Disabilities Act but still present challenges for special needs families, Wright said.

Playgrounds with mulch-like fall safe material on the ground make it difficult for children in wheelchairs to fully experience other city playgrounds, he said.

"You're able to maneuver a wheelchair on this surface with no issues," he said.

The playground also features sensory items for children to explore along a ramp system, specialized swings, dual slides to allow parents to slide alongside their children and what he called a "chill out chair" for children with autism.

"Kids with autism sometimes just need a place to zone everything out, and so that's what it is," Wright said.

He stressed the playground isn't intended just for children with disabilities.

"While the playground is designed for kids with special needs, it has the play value of a playground for the able-bodied child," Wright said.

The design of the playground will help remove barriers between special needs and able-bodied children, he said.

Barriers such as stairs often prevent special needs children from experiencing a playground in the same manner as the able-bodied children they may be playing with, Wright said.

"There's no steps anywhere on this playground," he said. "It's a bunch of ramps systems taking you to the slides and the swings."

The playground will also serve as a development resource for children, said Kathy Breed, co-founder of Play with Passion.

"Play can be a powerful connection between people, and this playground offers space for that connection," she said. "It's all toward the effort of providing an inclusive and safe environment for kids with special needs to get out and get fitness programming, get friendship and get social development happening."

Kimberly Parker of Rogers, co-founder and director of Clover Community School in Bentonville, said her son, Ian, would have benefited from playing on an inclusive playground.

"He struggles to make friends," Kimberly Parker said. "If we had a playground for him when he was younger, he could have participated with the other kids and probably would have made friends with them."

The students of Clover Community School will also greatly benefit from the development of the playground she said. The school serves students from kindergarten through eighth grade with unique learning abilities, she said.

"We have a little girl who uses a wheelchair and she has never been able to use playgrounds before," Parker said. "Our school will probably come out here as soon as possible and bring her here and just watch her have fun with all of our other students."

Michael Moreno of Bella Vista attended the opening of the playground Saturday with his wife, Cristal, and daughter Charlotte, 2.

Moreno said it's a good experience for his able-bodied daughter to be able to play alongside special needs children.

Cristal Moreno said spending time with special needs children will allow Charlotte to develop empathy for and understanding of others.

"She'll be able to see the limitations too and what they can and can't do," she said.

Creating experiences such as that for children makes the inclusive playground the most impactful piece of equipment in the Bentonville Parks and Recreation district, Wright said.

"People will come from all over to utilize that playground because of what they're able to do," Wright said. "This now makes this park a destination."

Citizens Park, 1101 S.W. Citizens Circle, is one of the most-visited parks in southwest Bentonville. The park was named to honor all of the residents of Bentonville who made it possible. The 35-acre park features a tennis complex, pickleball courts, multipurpose fields, a one-mile looped trail, an amphitheater, the Bentonville Community Center and an inclusive playground. More information on the park and renting its pavilion is available online at www.bentonvillear.com/1052/Citizens-Park.