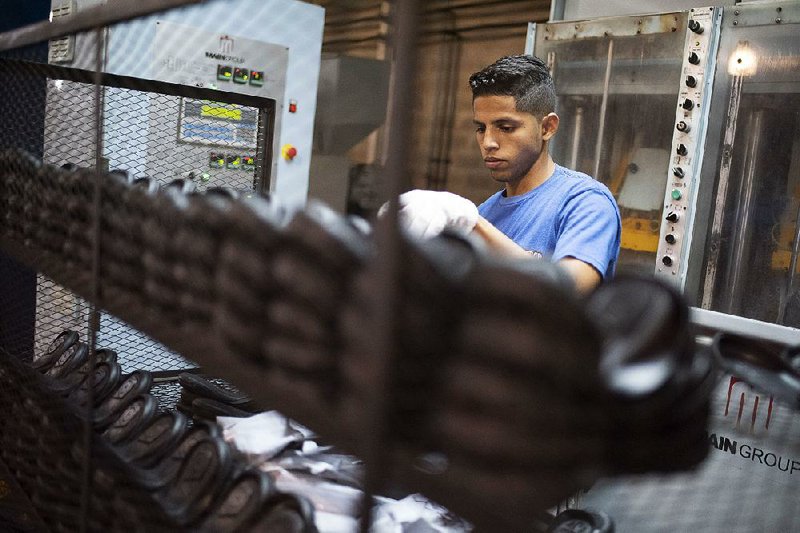 A worker sorts shoe soles at a factory in the industrial zone of Valencia, Carabobo state, Venezuela, in September.

Not all the businesses in Valencia's industrial zone closed during Venezuela's economic crisis. About two-thirds did.

Survivors among the rusting factories of the nation's former manufacturing heartland, two hours from Caracas, are enjoying a truce in the government's war on capitalism.

Without publicly acknowledging it, President Nicolas Maduro's socialist government has ditched a decade and a half of price controls. It's hard to put a precise date on the liberalization, because it never officially happened. However, in recent months supermarket shelves have been restocked and severe shortages of goods such as toothpaste and toilet paper have eased -- though they are sold at prices most Venezuelans can't afford.

Valencia, a city of perhaps 1 million residents, bore the brunt of the government's ruinous industrial policy. Today, business people there are making the most of the new atmosphere -- as long as it lasts.

"In today's Venezuela, there are still opportunities," said Ernesto Abbass, a Valencia industrialist with a metallurgical factory and investments in pharmacies. "There are some businesses that have managed to surf the waves of poor economic policymaking. We've had to become creative."

The roots of the deepest slump in the history of the Americas stretch back two decades. After coming to power in 1999, President Hugo Chavez's government gradually tried to move to a Cuba-style command economy. As it introduced price controls on staples such as beans and milk, these grew scarce, while uncontrolled goods, such as Scotch, remained on the shelves.

There were frequent crackdowns on people the government called "speculators" who sold goods for more than the legal price. They risked not only fines but also a cell in a gang-ridden prison.

Business people in Valencia who spoke with Bloomberg weren't clear whether the new state of affairs represents a real change in philosophy or a brief respite ahead of a new wave of attacks by the price-control agency. Either way, they can make a profit -- not legally, but in practice.

They can even do business in dollars. In March, the country suffered widespread power blackouts that lasted three days in the capital, Caracas, and even longer elsewhere. With credit-card readers out of action, people began paying for things in hoarded greenbacks.

The government turned a blind eye, and it suddenly became normal to quote prices in foreign currency. In one Valencia store, a jar of Nutella was on sale last week for $8, the same as a box of Froot Loops breakfast cereal.

In its heyday, Valencia produced washing machines, bicycles, pharmaceuticals, textiles, animal feed and plastics, among other things. Above all, it was Venezuela's motor city. Ford, General Motors and Chrysler all had assembly operations there, as well as the big tire manufacturers and dozens of local parts suppliers.

The industrial zone, which used to pulsate with hundreds of commuter buses, is now largely quiet and abandoned. One shuttered auto-parts factory was still full of inventory stamped with the official prices that made it unprofitable to stay in business.

Companies that survived now have the market to themselves. Most competitors have gone under, and the border is shut to Colombian industry. Rents, labor costs and utility bills are all low. There is pent-up demand for goods such as car parts that were unavailable for a long time. It is, just about, possible to turn a profit.

One Valencia-based business that sells radiators said that sales are up nearly 30% from last year. Traffic jams have made a comeback in Valencia, as well as in Caracas, after a long period when the shortage of parts kept much nation's aging vehicle fleet off the roads.

Even in the permissive new atmosphere, doing business remains an extreme sport, with blackouts, shakedowns by officials and out-of-control crime. As about 4 million Venezuelans have fled, the country has lost much of its skilled labor force. U.S. sanctions mean that many foreign firms are afraid to do business with any Venezuelans, in case they turn out to be tied to the Maduro government.

The nation's industry is running at only 19% of capacity, according to Conindustria, a trade organization, compared with 81% in Colombia. In Valencia, some companies stopped investing and reduced operations to a fraction of what they had been. General Motors shut down its Valencia operation in 2017 after authorities seized its plant and inventory.

Ford is sticking around, waiting for better days.

"Ford is working systematically to maintain operative conditions at the Valencia plant to resume production whenever enabled by industry conditions and financial viability," the company said in reply to emailed questions. "Ford has been operating in Venezuela for 57 years and has no plans to leave the country."

A recent survey by Caracas pollster Datanalisis found that the high cost of living is now the biggest concern for Venezuelans, ahead of corruption, crime and food scarcity. Even some opponents of the government complain that the price-control agency isn't doing more.

The cost of living has roughly tripled in dollar terms since the start of the year, according to Ecoanalitica, a Caracas-based economic consultancy.

In this environment, the authorities may calculate that yet another attack on private businesses would be popular. Valencia's industrialists are highly aware of this threat and are reluctant to invest more or ramp up production until it is lifted.

"This continues to be a business in survival mode," said Christian Palmisano, one of the partners in a factory that produces the soles for shoes, and rubber boots. "Over the last two years, we stopped evaluating whether we make a profit or a loss. It's a question of who survives the crisis and who dies."