The ceremony site was marked with an arch formed of elaeagnus, seeded eucalyptus and pampas grass. Music was by the Arkansas Capital String Quartet.

The bride, given in marriage by her father, wore an ivory organza gown with an Alencon lace bodice and embellished with appliques of Venise lace. She carried a gathered clutch of ranunculus, scabiosa, dahlias, astilbe, succulents and seeded eucalyptus in shades of orange, peach, cranberry, green and white.

Lindsay Black of Salt Lake City was matron of honor. Bridesmaids were Kerin Backhaus of Los Angeles; Courtney Rohm of Lexington, Ky.; and Elizabeth Blackshaw and Catherine Tidwell, cousins of the bride, and Ann Jeter, all of Little Rock. They wore chiffon gowns in the style of their choice in shades of blush, peach and cranberry. Junior bridesmaids were Talia Vogel and Anya Vogel of Washington, nieces of the groom. They wore blush floral chiffon dresses. The attendants carried smaller versions of the bridal bouquet.

Kevin Dupras of Little Rock was best man. Groomsmen were Chris Knight, McKenna Davis and Mark Chandler, all of Little Rock; Matthew Higgins of Dallas; and Henry Osborne of Gunnison, Colo., brother of the bride. Guests were seated by Frank Kumpuris of New York, William Hahn of Hong Kong and Richard Hahn of Little Rock, cousins of the groom.

A reception, at a pavilion behind Heifer International, had long farm tables and round guest tables decorated with a variety of containers holding succulents and wedding flowers. The buffet held a large arrangement of sorghum, pampas grass, roses, dahlias and hydrangeas. Music was by Runaway Planet.

The groom graduated from Lewis and Clark College in Portland, Ore., with a bachelor's degree in history. He is a health care consultant with Paracord Consultants Inc.

The couple will live in Little Rock after a wedding trip to Norway and southern Iceland. 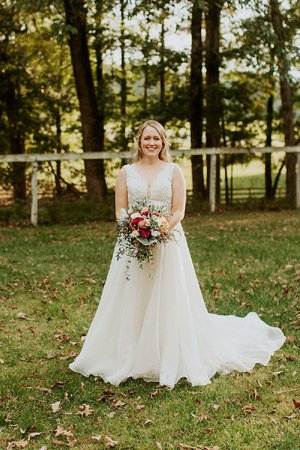