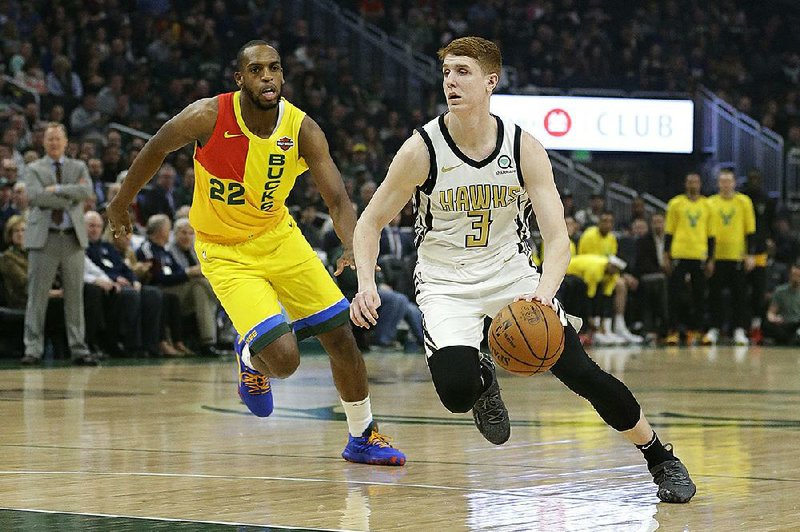 Kevin Huerter of the Atlanta Hawks said the talent level of NBA players is the main reason gimmick defenses are not destined to work.

In the NBA, they're a rarity.

And Huerter says the reason is simple.

"I honestly just think players are too good," he said.

Coaches may agree. The Toronto Raptors famously and effectively slapped a box-and-one against Golden State's Stephen Curry late in the fourth quarter of Game 2 in last season's NBA Finals, though that was in a situation where the Warriors' other elite scorers from that team -- Kevin Durant and Klay Thompson -- were both out of the game at the time with injuries.

So in that situation, the gimmick seemed apropos.

But in most situations, coaches probably wouldn't dare go with one.

"That worked when there wasn't Kevin Durant and Klay Thompson," Houston Coach Mike D'Antoni said. "Gimmicks are gimmicks. You go into a game, especially with us or Golden State or any of about eight teams now in the West ... you're going to throw a gimmick to beat somebody? I'm not going to do that. I'll trust my guys."

Still, they're not completely uncommon. Some teams play zone more than others now, mostly a 2-3, sometimes a 3-2. Those are fairly normal to see now, but the gimmicks aren't forgotten.

San Antonio Coach Gregg Popovich has dabbled with triangle-and-two defenses -- a box-and-one is a four-player zone with one defender playing tight man-to-man, a triangle-and-two is a three-player zone with two man defenders -- in recent years. He opened a game in February at Utah in the gimmick. It worked for a little bit; the Spurs led 24-19 after nine minutes, then got outscored 106-81 the rest of the way and lost by 20.

"They were working," Spurs guard Bryn Forbes said of the zones. "And then they didn't work as well."

Miami Coach Erik Spoelstra is a fan of zone defenses, at times, and thinks those schemes will get used more this season across the league. But he shies away from the gimmick or "junk" defenses because he thinks they can lead to either more confusion or less accountability on that end of the floor.

But he lauded Nurse for going with it -- on the game's biggest stage, no less.

"That was a really gutsy call," Spoelstra said. "I think it took extreme circumstances for that to even be a discussion."

The gimmicks have advocates. Steve Dagostino, who was a Division II first-team All-American at The College of Saint Rose in Albany, N.Y., and now works with high school, college and NBA players as a shooting and development coach, thinks the gimmick defense might be effective in late-game situations.

"What we saw in the NBA Finals was interesting because the gimmick defenses Nurse ran served two purposes," Dagostino said. "First, it surprised them and changed the rhythm of the Warriors. Secondly, it allowed the Raptors to effectively choose who shot the ball for the Warriors. By playing these defenses they left open certain shooters."

During that stretch where the Raptors had Fred VanVleet guarding Curry, plenty of Warriors -- DeMarcus Cousins, Draymond Green, Quinn Cook among them -- passed up open shots. The Warriors wound up winning the game, but the gimmick defense that Curry famously called "janky" after the game had left its mark.

"Moving forward, I wouldn't be surprised if more teams use these gimmick defenses in late-game situations or the playoffs," Dagostino said. "The added pressure seems to benefit this style."

New Orleans guard Jrue Holiday said trying something gimmicky makes sense in the playoffs, simply because teams are solely focused on that opponent and have a better feel on what will work.

"You're locked into a team for at least four games and you can make adjustments that way," Holiday said.

Before Nurse drew up the box-and-one on the fly during a late timeout in Game 2 of the title series -- it actually took his players a few seconds to realize he was calling for the gimmick, one that Raptors guard Kyle Lowry endorsed quickly and told teammates it would work -- Curry hadn't seen one used against him since his college days at Davidson.

"It was obviously innovative and unexpected in terms of defense," Curry said.

Maybe the shock value alone could make it a valuable tool for coaches going forward, even in short stints. The value of a gimmick might be making the opponent think about what could be coming next.

"When one player makes a team tick, makes everything happen, you use a box-and-one to take the team out of rhythm or simply make someone else beat you," Huerter said. "Players in the NBA for the most part are too good to do that."