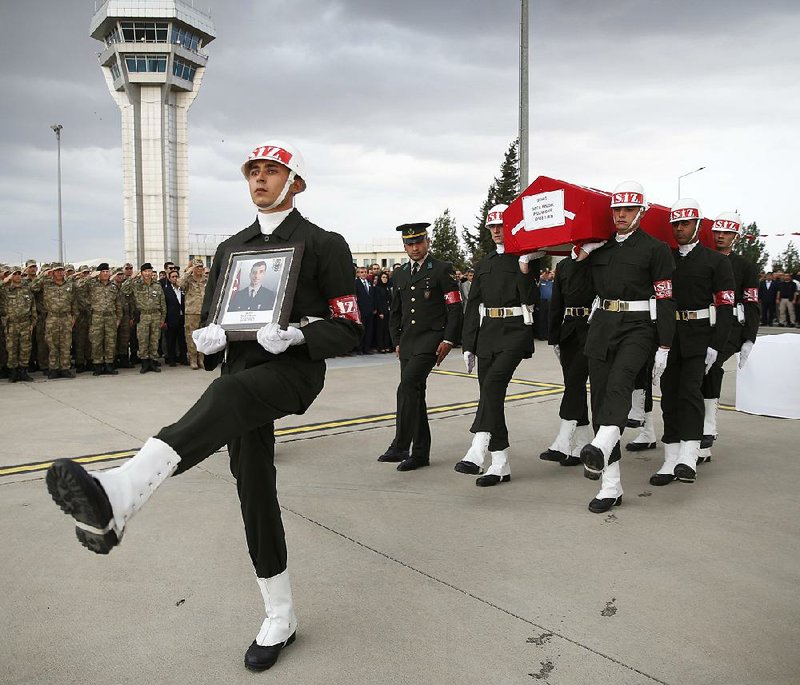 Turkish troops carry the flag-draped coffin of soldier Sefa Findik during a ceremony Sunday at the airport in Sanliurfa. Findik was killed earlier in the day — the seventh Turkish soldier killed in the offensive against Syrian Kurdish forces. Video is available at arkansasonline.com/1021syria/.

AKCAKALE, Turkey -- Dozens of vehicles rolled out of a besieged Syrian border town Sunday, evacuating Kurdish fighters and civilians and opening the way for Turkish-backed forces to take over in the first pullback under a U.S.-brokered cease-fire.

Secretary of State Mike Pompeo led the defenders of President Donald Trump's handling of Turkey's incursion into Syria, saying Sunday that the cease-fire is holding and that U.S. goals in the Middle East are being met despite criticism that Kurdish allies are being betrayed.

House Speaker Nancy Pelosi, meanwhile, led a surprise congressional visit to Jordan over the weekend, highlighting her disagreement with Trump's decision to remove U.S. troops from northern Syria and her opposition to Turkey's subsequent attacks on Kurdish enclaves.

Kurdish officials say the evacuation of the town of Ras al-Ayn will be followed by a withdrawal of their forces from a broader section of the border with Turkey, a central requirement of the cease-fire deal.

The withdrawal is supposed to take place before Tuesday evening, when the pause in fighting is set to end.

Still, questions remain over longer-term arrangements. Turkey says it wants a "safe zone" clear of the Kurdish fighters -- whom it considers terrorists -- across the entire northeast border. That is far longer than the territory the Kurds will leave under the terms of the deal.

[Video not showing up above? Click here to watch » https://www.youtube.com/watch?v=yZfj1dnb0Tc]

The Trump administration negotiated the accord after heavy criticism at home and abroad from those who said the U.S. had opened the way for the Turkish invasion by abruptly removing soldiers from northeast Syria. The Kurdish-led forces were allied with the Americans in the bloody, yearslong campaign that ended the Islamic State militant group's rule over nearly a third of Syria.

Pompeo said he received a report Sunday morning of "relatively little" fighting along the Syrian border after he and Vice President Mike Pence brokered the temporary cease-fire with Turkish President Recep Tayyip Erdogan in Ankara last week. Pompeo insisted that U.S. interests, including preventing ethnic cleansing of the Kurds in the region and avoiding a resurgence of the Islamic State, are being served.

"I'm very confident that this administration's efforts to crush [the Islamic State] will continue," Pompeo said on ABC's This Week.

Sen. Lindsey Graham, R-S.C., a recent critic of Trump's Syria policy, responded more positively on Sunday, saying the president was "thinking out of the box." Earlier in the month, Graham suggested that the withdrawal from northern Syria made him want to throw up.

But Sen. Robert Menendez of New Jersey, the top Democrat on the Senate Foreign Relations Committee, and others on the Sunday morning political shows called the administration's actions a mistake that abandons the Kurds and other allies while bolstering Russia's position in the Middle East.

"I think the secretary lives in a parallel, alternative universe," Menendez said on ABC in reference to Pompeo.

Retired Army Gen. David Petraeus said on CNN's State of the Union that the U.S. has abandoned its Syrian Kurdish partners, and he called the U.S. actions "a grave, strategic mistake."

"This does not end an endless war," he said. "It probably prolongs it."

Critics say Trump gave Erdogan a green light to attack American-allied Kurdish militias, risking a resurgence of the Islamic State and a slaughter of the Kurds, when he pulled U.S. troops out of Syria.

Esper said U.S. troops leaving Syria will go to western Iraq and continue to conduct operations against the Islamic State to prevent its resurgence.

Pelosi, along with the nine-member congressional delegation, met with Jordanian King Abdullah II in the capital, Amman, late Saturday for talks focusing on security and "regional stability," according to a statement from her office.

Jordan is a key U.S. ally in the region and has been greatly affected by the eight-year civil war in neighboring Syria. Jordanian officials say the kingdom hosts some 1 million Syrians who have fled the fighting.

"With the deepening crisis in Syria after Turkey's incursion, our delegation has engaged in vital discussions about the impact to regional stability, increased flow of refugees, and the dangerous opening that has been provided to [the Islamic State], Iran and Russia," said the statement.

Jordan's Petra state news agency said Abdullah stressed the need to safeguard Syria's territorial integrity and emphasized the importance of guarantees for the "safe and voluntary" return of refugees.

"The meeting also covered regional and international efforts to counter terrorism within a comprehensive approach," the agency said.

Some critics saw Pelosi's sudden appearance in Amman as a slap at Trump.

"I don't think it matters what they talked about," said a former Israeli general, who asked not to be named because of his ties to the military. "What matters is that she came here to draw a line under his abandonment of the Kurds and the outrage it has caused."

Trump has said repeatedly that he wants to extract the United States from "endless wars" in the Middle East. The decision to move U.S. forces from Syria to Iraq highlights the challenges of reaching that goal.

For the moment, the Kurds' pullback was focused on Ras al-Ayn, a town that has been a major battle zone since Turkey launched its invasion Oct. 9.

The cease-fire deal only calls for fighters to leave. But Kurdish civilians fled in the convoy as well, fearing the Turkish-backed Free Syrian Army. That group's fighters, who are Arab and often Islamist extremists, have been accused of killings of Kurdish civilians and captured fighters during this campaign and in other Syrian territory seized in Turkish campaigns since 2017.

That flight of civilians is likely to be repeated in other areas the fighters withdraw from, though most have already fled their homes in the past days of fighting.

Turkish TV showed a line of vehicles moving through agricultural areas out of town Sunday. The Turkish military said at least 86 vehicles were involved. The convoys passed through corridors opened by Turkish-backed forces and headed to the town of Tal Tamr farther south.

A senior official in the Kurdish-led forces, Redur Khalil, said the evacuation was completed in the afternoon. "We now have no fighters inside the city," he said. The pullout elsewhere had not yet begun, he added.

The Kurds had been holed up for days in a small pocket on the southern edge of the city, surrounded by the Turkish-backed fighters and engaged in clashes well after the start of the cease-fire. The Kurdish-led Syrian Democratic Forces said 16 of its fighters had been killed and three wounded the previous 24 hours.

Both sides accuse each other of repeatedly violating the 3-day-old cease-fire. Turkey's Defense Ministry said one of its soldiers was killed Sunday in a Kurdish attack with anti-tank weapons and small-arms fire near the border town of Tal Abyad.

That brought the Turkish military's death toll to seven soldiers since it launched its offensive.

Khalil, the official in the Kurdish-led forces, said that after the Ras al-Ayn evacuation, the forces will withdraw from a zone about 75 miles wide and 20 miles deep between Ras al-Ayn and Tal Abyad to the west.

That area has been the main theater of fighting during the offensive, causing the flight of tens of thousands of civilians -- Arab and Kurd -- from the villages that dot the landscape. At least 160,000 civilians have been displaced by the Turkish assault.

Significant issues remain over the arrangements at the border.

A previous agreement between the U.S. and Turkey over a "safe zone" along the Syria-Turkey border foundered over the diverging definitions of the area.

Erdogan has said the Kurdish fighters must withdraw from the entire northeastern border from the Euphrates River to the Iraqi border, more than 260 miles.

U.S. officials say the agreement pertains to the 75-mile section. Erdogan's spokesman, Ibrahim Kalin, confirmed that is the area affected by the pause in fighting but said Turkey still wants the larger zone. Turkey says it also wants some of the 3.6 million Syrian refugees on its soil to be settled in the safe zone.

Another question is what the arrangement will be along the rest of the northeastern border, most of which remains solely in the hands of Kurdish-led fighters.

When the U.S. troops withdrew, the Kurds turned to Russia and secured an agreement for Syrian government forces to deploy in the northeast last week.

So far, the Syrian forces have only moved into one location directly on the border, the town of Kobani, and a few positions farther south.

Erdogan is to meet with Russian President Vladimir Putin in the Russian town of Sochi on Tuesday. Kalin said Erdogan will tell Putin that Ankara does not want either Syrian forces or Kurdish fighters along the border because refugees would not go back to areas under their control.

"We want to create conditions that will be suitable for them to return where they will feel safe," Kalin said.

Information for this article was contributed by Mehmet Guzel, Bassem Mroue, Zeynep Bilginsoy and staff members of The Associated Press; by Mark Niquette, Billy House and Hailey Waller of Bloomberg News; and by Erin Cunningham, Steve Hendrix, Amanda Erickson, Tiffany Harness and Sarah Dadouch of The Washington Post. 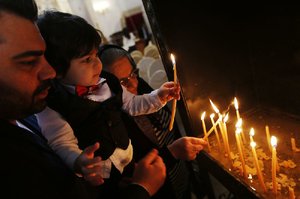 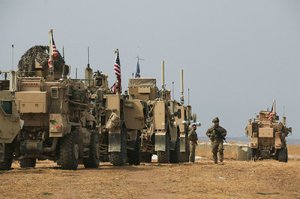 Photo by AP/BADERKHAN AHMAD
An American military convoy stops Sunday near the town of Tal Tamr in northern Syria. U.S. forces are pulling out of Syria and, according to U.S. Defense Secretary Mark Esper, heading to Iraq.