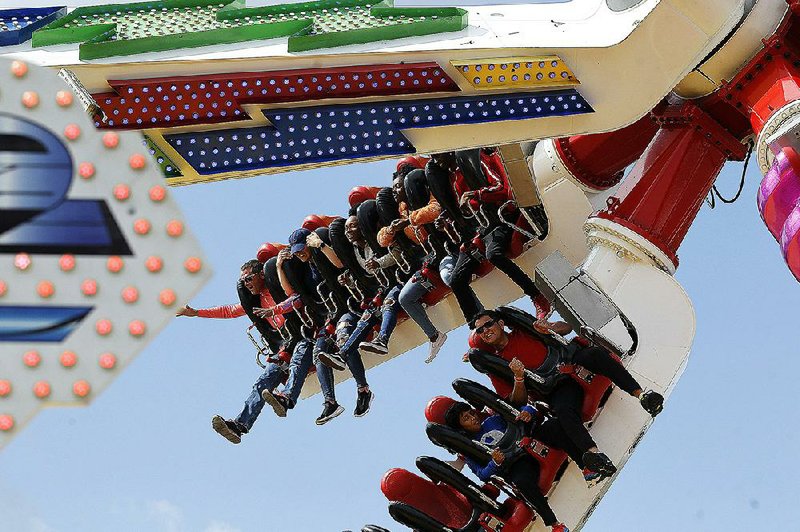 Sunshine and mild temperatures during the week brought smiles to the faces of Arkansas State Fair attendees and organizers alike during the fair's 80th annual run.

According to Will Hornburg, director of sales and marketing for the fair on Roosevelt Road in Little Rock, 429,937 people attended the fair through Saturday, with Sunday still to go. Hornburg said that in 2015 the fair posted its best attendance in the past 10 years, with 473,106 people attending through the entire 10-day run, but he said this year's fair will come close to that record.

"We're on pace to meet or exceed our 2015 attendance," he said. "This year we're looking to have this be our second- or third-best fair ever, in terms of overall attendance."

Rainy, cold weather last year put a damper on the fair. Attendance was sharply down in 2018, with only 305,548 people attending during the run. However, the second Saturday of the fair in 2018 set an all-time single-day attendance record of 91,003 people.

This year's second Saturday attendance was 88,696 people, which Hornburg said stands as the second-highest single-day attendance record in the fair's history.

Cassandra Resendes, one of dozens of game operators at the fair, said the crowds have been good during the run. She said the improved weather over last year resulted in a big increase in business -- plus, she said, she was given a better location on the midway this year, with higher traffic.

[Video not showing up above? Click here to watch » https://www.youtube.com/watch?v=i50xrcnlhSc]

"The weather has been much nicer," she said Sunday. "It's a little hot today but it has been a really good week."

Eric Barnes, spokesman for the Little Rock Police Department, said even with the increased attendance, the crowds were well-behaved, and police had to deal with only a few minor incidents.

"We've got a lot of staff here from multiple agencies so it's been mostly a matter of crowd control but not a lot of problems to deal with," Barnes said. "We did have one individual who stole something in the Hall of Industry, but he was arrested quickly."

The Little Rock Police Department and Arkansas State Police both have staffed booths set up in the Hall of Industry.

Barnes said there were no violent incidents at the fairgrounds during the fair, and he said perimeter patrols set up outside the fairgrounds helped keep break-ins to a minimum as well.

Randy Groscurth of Tampa, Fla., said he has been selling corn dogs at the Arkansas State Fair since 1973.

"I've been coming here for 47 years. I was a young fellow when I started." Groscurth said. "Last year, we got hurt with the Saturday and Sunday we lost because of the rain. This year has been much better. The weather has been perfect."

"And we've used it ever since," he said.

Tanesha Smalls of Little Rock, at the fair with her two daughters, Ryanna, 7, and Tianna, 4, her friend Marshea Fudge, and Fudge's daughter Mari Wilks, 7, took a break at Groscurth's stand.

"Yeah, we've had a good time so far," Smalls said. "It is kind of hot, though. I thought it would be cooler."

She said her children had ridden several rides, including a roller coaster and a slide.

"We went on the big slide," Tianna proudly interjected.

Nora, Blackwell said, had ridden the elephants, the race cars and the trucks, and she had gone through the Monkey Maze, an attraction like a fun house. 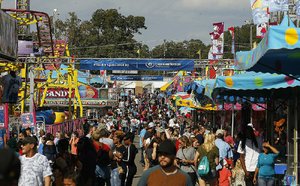 Photo by Thomas Metthe
Fairgoers walk along the midway Sunday during the final hours of the Arkansas State Fair in Little Rock. More photos are available at www.arkansasonline.com/1021fair/