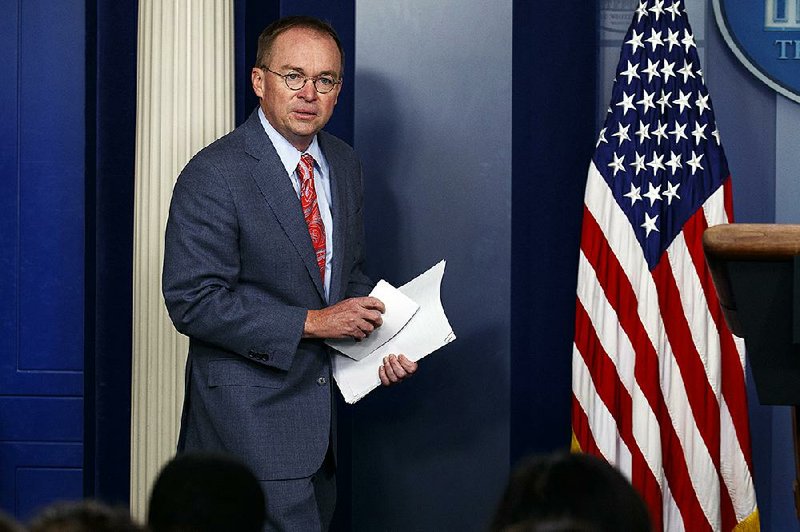 WASHINGTON -- Mick Mulvaney, the acting White House chief of staff, tried again Sunday to back off assertions he made to reporters last week that the Trump administration had held up an aid package to Ukraine because the president wanted the country to investigate Democrats, acknowledging he did not have a "perfect press conference."

During an appearance on Fox News Sunday, Mulvaney disagreed with an assertion by the show's anchor, Chris Wallace, that Mulvaney's remarks were proof of a quid pro quo, an exchange Trump has publicly denied for weeks. But he struggled to explain how his comments Sunday were not at odds with what he said last week.

"That's what people are saying that I said, but I didn't say that," Mulvaney said, adding that he had outlined "two reasons" for withholding the aid to Ukraine in a news briefing with reporters Thursday. In the briefing, however, he outlined three reasons: the corruption in the country, whether other countries were also giving aid to Ukraine and whether Ukrainian officials were cooperating in a Justice Department investigation.

Wallace played back Mulvaney's appearance before reporters in which he said the president's concern about interference in the 2016 election -- and his interest in a widely debunked theory that a Democratic National Committee server is being held in Ukraine -- was part of that final reason for withholding aid.

Pressed by Wallace, Mulvaney said he was "not acknowledging there's three reasons."

[Video not showing up above? Click here to watch » https://www.youtube.com/watch?v=I4Zjtcml7lU]

"I recognize that," Mulvaney responded. But he urged Wallace "to go back to what actually happened in the real world."

"I recognize that I didn't speak clearly, maybe, on Thursday," he said. "Folks misinterpreted what I said. But the facts are absolutely clear, and they are there for everyone to see." He said there could not have been a quid pro quo because "the money flowed without any connection whatsoever to the DNC server."

In a subsequent written statement, and again on Sunday, Mulvaney insisted there were only "two reasons for holding back the aid," leaving out the Justice Department's probe, which a department official already disavowed. Mulvaney added that once the administration was able to satisfy its concerns that Ukraine was "doing better with" corruption and establish that European nations were giving "a considerable sum of money in nonlethal aid, once those two things cleared, the money flowed."

Mulvaney's comments last week set off alarm at the White House and among its Republican allies in Congress, as a Democratic impeachment inquiry over Ukraine gains steam.

But Mulvaney doubled down Sunday on his assertion that the president had a right to demand information about the investigation into the unfounded theory that Ukraine, not Russia, was involved in hacking and releasing Democratic Party emails during the 2016 election.

"It is legitimate for the president to want to know what's going on with the ongoing investigation into the server," Mulvaney said. "Can I see how people took that the wrong way? Absolutely."

Pompeo declined Sunday to weigh in on Mulvaney's news conference.

"I will leave to the chief of staff to explain what it is he said and what he intended," Pompeo said on ABC's This Week.

Pompeo also refused to say whether Giuliani had been acting in Ukraine with his blessing, arguing that it was his "consistent policy ... not to talk about the internal deliberations" of the administration. But he defended the decision to bring in an outside figure like Giuliani, arguing that "it happens all the time."

"This is completely appropriate," Pompeo said, pointing out that in the past, former Secretary of State Hillary Clinton took advice from Sidney Blumenthal, and former Ambassador Bill Richardson had been deputized to help on North Korea policy.

But others vehemently disagree.

"Rudolph W. Giuliani running around meeting with heads of state on behalf of the president's political interests is a profoundly shocking and important thing for us to understand," Rep. Jim Himes, D-Conn., said Sunday on CBS' Face the Nation. Himes sits on the Intelligence Committee, one of three House panels conducting the impeachment inquiry.

Not just Democrats are upset. According to testimony of Fiona Hill, the former top National Security Council director for Russia and Europe, former national security adviser John Bolton was livid at Giuliani's involvement, calling him a "hand grenade."

Bolton also wanted it known, she testified, that he refused to be a part of what he called a "drug deal" between Gordon Sondland, the U.S. ambassador to the European Union, and Mulvaney, two of the three officials -- along with former special U.S. envoy to Ukraine Kurt Volker -- who had been tasked to handle Ukraine policy with Giuliani after the ouster of former U.S. Ambassador Marie Yovanovitch.

The committees have not yet struck a deal with Bolton to testify in their impeachment probe, though there is significant interest among the panels conducting the investigation to have him come forward.

There appears to be bipartisan interest as well in hearing from Giuliani. Meanwhile, Pompeo said Sunday that he would "do everything I'm required to do by law" if asked to come forward and testify in the probe.

In the coming week, the House panels will host at least five government officials who were in some way connected to the use and redirection of Ukraine military aid, including Michael Duffey, the official at the Office of Management and Budget who signed off on the apportionment letters that froze the money.

Information for this article was contributed by Katie Rogers and Emily Cochrane of The New York Times; and by Karoun Demirjian and Kyle Swenson of The Washington Post.