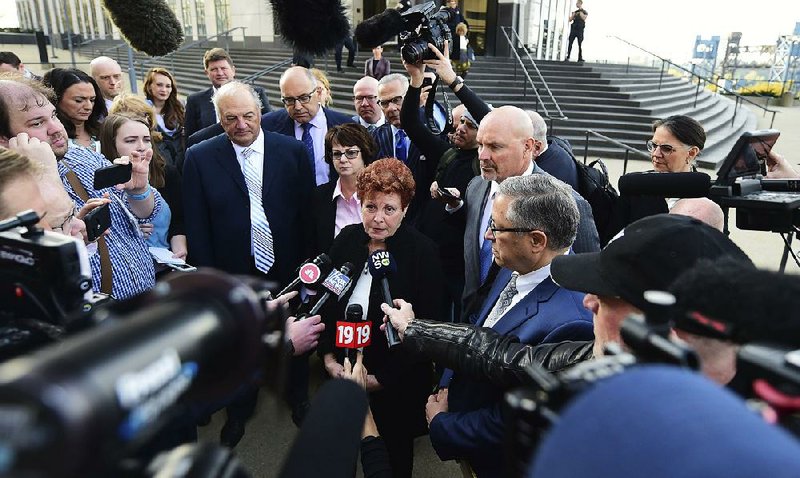 “We started this originally to stop the [drug companies’] behaviors — to hold these folks accountable,” said Ilene Shapiro, the county executive for Summit County, Ohio. “Enough is enough. We’ve got people dying on our streets.”

CLEVELAND -- Two Ohio counties settled Monday with four drug companies on the morning of a landmark federal trial over responsibility for the opioid epidemic, striking a $260 million deal that emerged just hours before opening statements were set to start.

The deal is with major distributors McKesson Corp., AmerisourceBergen and Cardinal Health, and Israeli generics drugmaker Teva Pharmaceuticals. The agreement does not include a fifth defendant, Walgreens, the retail drugstore chain that was sued over its distribution operation. Walgreens' case has been postponed.

A sixth defendant, Melville, N.Y.-based Henry Schein Medical, announced Monday morning that it had reached a deal worth $1.25 million with the two counties.

The companies admitted no wrongdoing in fashioning the settlement.

In a statement from the bench Monday morning, U.S. District Judge Dan Aaron Polster said broader talks to settle all the cases would continue. Polster, who has urged such a settlement for nearly two years, said the two-county deal was reached sometime between midnight and 1 a.m.

Going to trial could have cost the four drug companies more than $8 billion if Cuyahoga and Summit counties were awarded the money they had sought. The agreement also buys the companies time to try to fashion a more wide-ranging settlement with the 2,400 cities, counties, American Indian tribes and others that have also sued the drug industry. Their cases have been consolidated in a sprawling "multidistrict litigation" before Polster.

[Video not showing up above? Click here to watch » https://www.youtube.com/watch?v=g3TTtb_xAvw]

Under the deal, the Ohio counties would receive an immediate $215 million from the distributors, and another $20 million over two years from Teva. Teva also would supply another $25 million in anti-addiction medications over the next three years.

"This is a landmark, significant settlement in the history of the opioid epidemic," said Paul Farrell, co-lead plaintiffs' counsel. "We were able to make a significant impact in the communities of Cuyahoga and Summit counties. There are no political victories in this. We either make a difference or we don't."

Asked what moved the parties to finally make a deal, Farrell replied, "It's like any other case: We were going to stand up and tell the world what they did."

Another plaintiffs' counsel, Paul Hanly, said he believes this deal boosts the chances of a global settlement, adding, "I'm going to be very interested in what the market does the next couple of days."

But several families who lost loved ones to opioids said they were not entirely satisfied by the agreement. Greg McNeil, whose son became addicted to pain pills and died of a heroin overdose in 2015, said outside the 18th-floor courtroom that families would have liked an apology from the companies.

"A settlement with an admission of wrongdoing would have begun to bring closure for families who have lost loved ones to the opioid epidemic," he said. "Sadly, that didn't happen."

"There's no amount of money that's going to change the devastation and destruction that they've done to families not only all across our county but all across the country," said Travis Bornstein, who was preparing to testify in the Cleveland trial. But he said the settlement should help provide services for people who are struggling.

Bornstein said his son, Tyler, became hooked on opioids as a teenager after receiving a prescription following surgery on his arm. He died of a heroin overdose five years later, in 2014.

Better funding for treatment programs might have helped his son, who was on a waiting list when he died, Bornstein said.

Ilene Shapiro, county executive for Summit County, which includes the city of Akron, said a task force has been formed to decide how to distribute the badly-needed funds.

"We started this originally to stop the [drug companies'] behaviors -- to hold these folks accountable," she said. "Enough is enough. We've got people dying on our streets."

In a joint statement, the three distributors, which are among the richest companies in the United States, disputed the counties' allegations that the companies had delivered highly suspicious quantities of opioids without reporting them to authorities.

The distributors added that they expect "settlement funds to be used in support of initiatives to combat the opioid epidemic, including treatment, rehabilitation, mental health and other important efforts."

The settlement also means that the evidence prepared for the trial won't be fully aired.

Lawyers for the counties were preparing to show the jury a 1900 first edition of The Wonderful Wizard of Oz, featuring the poppy fields that put Dorothy to sleep, and a 3,000-year-old Sumerian poppy jug to show that the world has long known the dangers of opioids.

Walgreens issued a statement that said in part: "The allegations against Walgreens are very different. We never manufactured, marketed or wholesaled prescription opioid medications. Our pharmacists have always been committed to serving patients in the communities where they live and work."

The two-county Ohio settlement follows the collapse of an extraordinary effort Friday to reach a deal covering all the cases. Polster had summoned the chief executives of the distributors and representatives of the other two companies to his courtroom.

Also called were the plaintiffs' lawyers and four state attorneys general who represented dozens of states that have been negotiating separately with the drug companies. Nearly every state has sued a variety of companies in state courts.

Polster shuttled among the parties, trying to find common ground. But after about 10 hours of talks, the parties were still far apart.

Negotiations continued over the weekend between the two Ohio counties and the drug companies, Hanly said. As of late Saturday, the distributors were offering $90 million, and the counties were holding out for $250 million. For the plaintiffs, he said, $200 million was an important target. Eventually, he said, the distributors raised their offer to $215 million, and the plaintiffs accepted.

Asked why Walgreens hadn't settled, he said the company's leadership continues to maintain the firm had done nothing wrong.

More than 200,000 people have died of overdoses of prescription narcotics in the past two decades and another 200,000 have succumbed to overdoses of heroin and illegal fentanyl, which is now the main drug propelling the crisis.

The counties' argument rested mainly on the sheer volume of drugs the companies poured into northeastern Ohio. They contended the distributors, motivated by profits, did little to monitor doses that spilled into the black market, ignoring obvious signs as they filled order after order.

They argued that deluge created a "public nuisance" that endangered residents' health and were seeking $7.2 billion to remedy the crisis. They also sought another $1 billion in damages.

Polster had ruled that if the jury found the companies liable, he would decide how much they must pay to remedy the public nuisance.

In August, an Oklahoma judge found health care giant Johnson & Johnson liable for fueling the opioid crisis and ordered the company to pay the state $572 million on a similar public-nuisance claim. After a seven-week trial, Judge Thad Balkman agreed with the state's claim that the company had endangered public health by aggressively marketing opioids and by importing and processing the raw materials for oxycodone.

Johnson & Johnson has appealed that decision.

In this case, Cuyahoga and Summit counties also claimed the companies worked together like a drug cartel, conspiring to expand their market, deceptively promote their products and minimize addiction risks.

The drug companies denied the accusations, asserting they delivered legitimate medications to patients suffering from cancer and other painful conditions and complied with regulations set by the Drug Enforcement Administration and the Food and Drug Administration. They also denied working in concert, contending the counties cannot prove any direct link between their conduct and the harms or expenses incurred.

Information for this article was contributed by Sari Horwitz, Scott Higham and Lenny Bernstein of The Washington Post; by Julie Carr Smyth and Geoff Mulvihill of The Associated Press; and by Jan Hoffman of The New York Times. 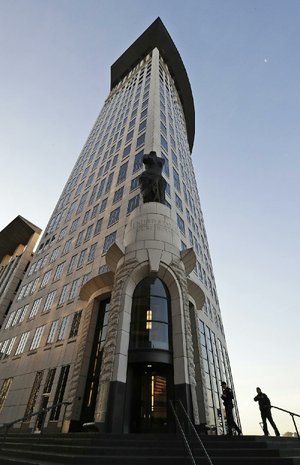 Photo by AP/TONY DEJAK
Authorities patrol the area outside the federal courthouse in Cleveland, where the $260 million settlement was announced Monday morning. More photos are available at arkansasonline.com/1022opioid