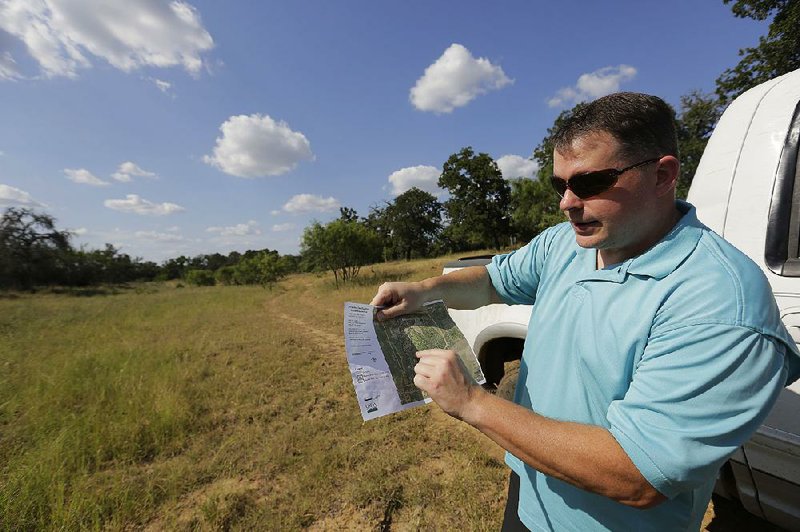 Heath Frantzen uses a map to point out where the proposed natural gas pipeline would cross his 260-acre ranch in central Texas.

FREDERICKSBURG, Texas -- One of the longest proposed new natural gas pipelines in the U.S. is set to run through Heath Frantzen's property in the Texas Hill Country, where more than 600 white-tailed and trophy axis deer graze on a hunting ranch his family has owned for three generations.

Fearing financial catastrophe and conservation risks, Frantzen and dozens of other landowners in the south-central Texas region have banded together with environmental groups and conservative-leaning city governments in opposing the route of pipeline giant Kinder Morgan's 430-mile, $2 billion natural gas expressway.

But Kinder Morgan has defended its proposal, stating it's looking to ease a pipeline shortage and help drillers transport gas trapped in West Texas' thriving Permian Basin to refineries on the Gulf Coast.

Now, the company is exercising eminent domain as a legal battle over the path of the pipeline threatens to jeopardize future projects passing through central Texas. Opponents of the route are also challenging state regulators at the Texas Railroad Commission who gave Kinder Morgan the green light while accepting millions of dollars from the oil and gas industry.

Unlike the Dakota Access Pipeline project that sparked protests in 2016 and 2017 over fears it would hurt the environment and sacred American Indian sites, opposition to the Texas pipeline has largely played out of public view.

Kinder Morgan's pipeline project comes as an unprecedented boom in oil and natural gas production in the Permian Basin has catapulted the nation to the forefront of the global shale market. Last year, the U.S. surpassed Russia and Saudi Arabia to become the world's largest crude oil producer, according to an assessment by the U.S. Energy Information Administration.

Natural gas is a byproduct of oil drilling, and without the proper infrastructure to move it from the Permian Basin, companies end up burning off excess through a process known as flaring, Kinder Morgan spokesman Allen Fore said.

"That's the purpose of this project, to capture that natural gas and ship it to market," Fore said.

If completed, the pipeline will deliver up to 2 billion cubic feet of natural gas per day -- enough to fuel 31,500 homes -- as it passes through 16 Texas counties.

Texas already has the most expansive pipeline network in the country with more than 460,000 miles of channels zigzagging through it.

But the project is at the center of a fight that has created an unlikely alliance assembled across the state's central region, where momentum has grown in calling for the company to reroute the pipeline and in urging for further industry regulation in oil-friendly Texas. Those strange bedfellows have held town-hall gatherings, formed grassroots community campaigns, and lodged lawsuits against Kinder Morgan.

Opponents of the route have pointed to the potential contamination of the region's porous Edwards Aquifer, the effect it would have on an environmentally sensitive area, and the lack of public engagement and oversight in the routing process.

There is also concern that Kinder Morgan's success would set a precedent for other companies interested in building conduits through Hill Country, said Chuck Lesniak, who serves on an advisory committee for the U.S. Department of Transportation's Pipeline and Hazardous Materials Safety Administration.

"I do know that the industry is paying attention to this project, and the legal issues, because from a legal standpoint, if this goes south on Kinder Morgan, it has enormous impacts on other pipeline projects proposed for Texas," Lesniak said.

A judge has ruled in favor of the Houston-based company in one legal challenge attempting to block the project on grounds that the Texas Railroad Commission doesn't provide enough state oversight or regulation; that decision is being appealed.

Fore said the company has made 150 routing adjustments and is not considering changing the pipeline's set path. The company has started preliminary work, including marking the construction space and leveling the land, but no pipeline has been put in the ground.

Clashes between rural landowners and companies seeking to seize property are not uncommon in Texas, where an estimated 95% of the land is privately owned. Although landowners are compensated for pipeline operators' use of easements, they often argue the money provided isn't enough.

Unlike the Texas Public Utility Commission rules that electric, telephone and water utilities must follow, oil and gas companies do not need to seek the approval of the Texas Railroad Commission or affected municipalities for their proposed route. They also have no formal public process to hear from affected landowners.

The commission has said it does not approve of whether a pipeline is necessary.

"We approve of whether they have met certain requirements and given us information that we need so we know this is a pipeline ... about to be constructed so we can go out and inspect and put it on our inspection schedule," said Railroad Commission spokeswoman Ramona Nye.

Texas' lack of oversight on the pipeline industry allows companies to make unilateral determinations about the best route, said Luke Ellis, an attorney representing roughly 40 landowners, including Frantzen, in their disputes with Kinder Morgan.

For Frantzen, it could be the end to his way of life at his 260-acre ranch.