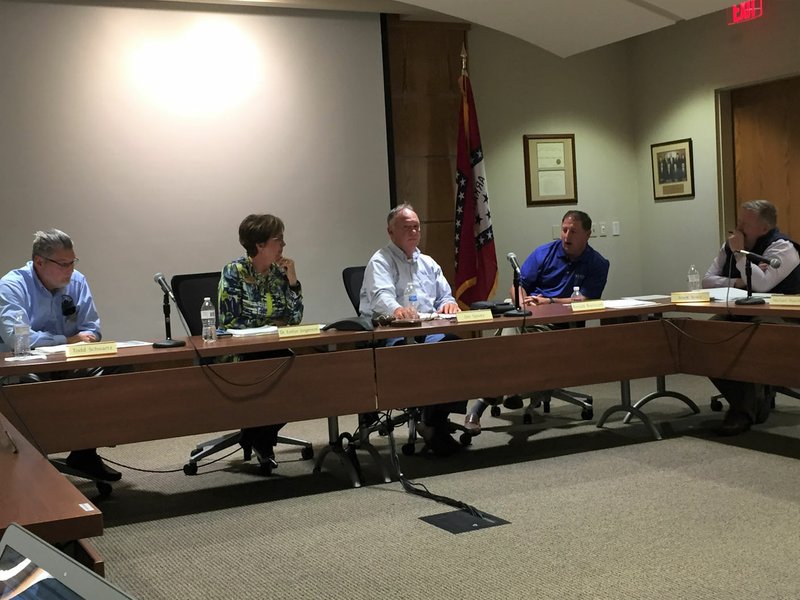 NWA Democrat-Gazette/DAVE PEROZEK President Evelyn Jorgenson, second from left, and members of the Northwest Arkansas Community College Board of Trustees discuss the possibility of establishing a cross country team during the board's meeting on Monday, Oct. 21, 2019.

BENTONVILLE -- Northwest Arkansas Community College might be on the verge of starting its first sanctioned sports team.

John Luedtke, who directs health, physical education and club sports at the college, pitched the idea of establishing a cross-country team during Monday's Board of Trustees meeting.

Northwest Arkansas Community College’s winners of the Student of the Month Golden Eagle Award for September and October were introduced at Monday’s board meeting. Ronlisha Nichols was September’s winner and Ashley Luzzi was October’s winner.

Joe Spivey, board chairman, said the board should plan to vote on the matter at its next meeting on Nov. 12.

Cross-country is growing in popularity at the high school level and the college could easily attract some of those runners if it had a team, Luedtke said. Cross-country is also probably the cheapest athletic program an institution can run, he said.

The team would compete in the National Junior College Athletic Association's Division II against other colleges in Arkansas and Oklahoma.

Mike Rush, a running enthusiast and owner of Rush Running Co., also attended Monday's meeting to express his support for a cross-country program. Rush said he'd be willing to be a sponsor of the team and could connect the college with other businesses that would sponsor.

"The money is there to pay for your program, and I think the opportunity is there," Rush said, adding he's "pumped" about the possibility.

The biggest challenge early on would be finding the right coach and making high school athletes aware the college offers them the opportunity to compete at the next level, Rush said.

The college offers only club sports. About five years ago, the board set up a committee that studied the possibility of offering sanctioned sports. That committee presented a plan for launching women's volleyball and softball and men's baseball programs. College administrators, however, declined to pursue it based on feedback from various stakeholders, college President Evelyn Jorgenson said at the time.

The athletics idea resurfaced in July, when Jorgenson told board trustees she'd been contacted by a person interested in leading a cross-country program. Reaction from the board was mixed, but trustees generally supported exploring the idea further.

It would cost the college about $54,000 per year to sustain a team of 20 student-athletes, including $15,000 in scholarship money. Those 20 students would bring the college a projected $76,000 in tuition and fees, according to numbers Luedtke presented.

"I would not advocate this cross-country program if I didn't think it would make money," Luedtke said.

The assumption is the students who would join the cross-country team would be students the college wouldn't otherwise attract because they want the opportunity to run in college, Jorgenson said.

Trustee Ron Branscum asked where officials would draw the line when it comes to athletic programs if they decide to adopt cross-country.

"If this is approved, what's next?" he said.

Jorgenson said her previous employer, Moberly Area Community College in Missouri, had one sport: basketball. The college adopted basketball decades ago and made clear from the beginning it would not pursue any other sports.

"Obviously boards change and different things can be done, but there's nothing you can do about that," she said.