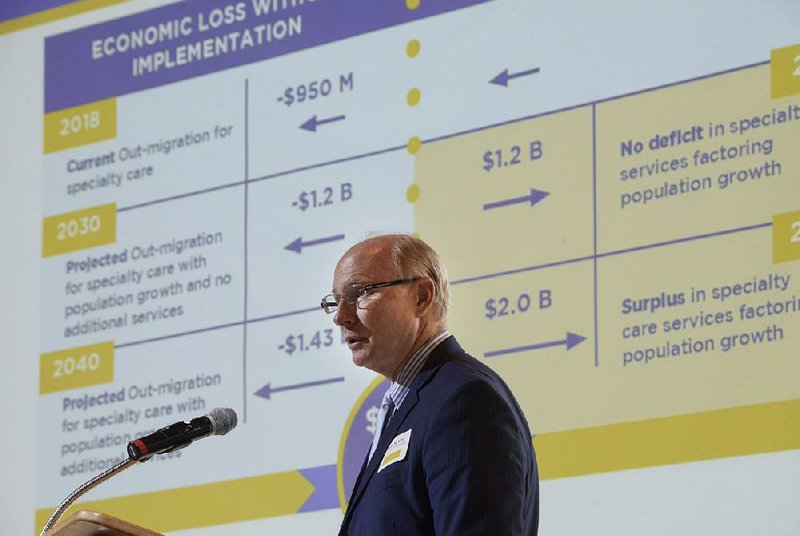 BENTONVILLE -- A Walton family-backed research institute set to open today aims to foster economic growth in the central U.S., which has been slower to recover from the last recession than other parts of the country.

Economist Ross DeVol, a fellow at the Walton Family Foundation, will serve as president and chief executive officer of Heartland Forward, which he describes as a "think and do tank," with an emphasis on the "do."

DeVol said the foundation, led by the children and grandchildren of Walmart Inc. founder Sam Walton, saw that while some states and metropolitan areas in the nation's midsection have think tanks that focus on local issues, "there really wasn't an organization that focused on the heartland as a whole and ways to improve the economy."

In February, the foundation said in a news release that the Walton Fellows resident research program would "shift" to the new research organization with a mission "to improve economic performance in the center of the United States by advocating fact-based solutions to foster job creation, knowledge-based and inclusion growth, and improved health status."

DeVol's research papers on topics such as the most dynamic U.S. metropolitan areas and micropolitans -- defined as those with populations between 10,000 and 50,000 -- and how research universities contribute to regional economies will be moved to the new heartlandforward.org website that also is expected to go live today.

But conducting the research "is a means to an end," said DeVol, former chief research officer at the Milken Institute economic think tank in California. "You're trying to disseminate the information as widely as possible, and then engage with policymakers and other officials who might be able to implement some of the findings in the policy recommendations.

"The other thing that's really critical to our mission," DeVol added, "is we are independent, nonaligned, nonpartisan, and we will reach out to both parties and people who aren't in either party, and there will not be any political message in any of our work. It's simply, 'Here are the facts, and these are the recommendations based upon our research findings.'"

While plans for Heartland Forward call for a staff of about 25 people after five years, the institute is starting with a staff of five. For now, they're working out of temporary offices in downtown Bentonville, with the possibility of eventually moving into the Massey Building.

DeVol's current research team includes two visiting fellows. Richard Florida is a professor of business and creativity at the University of Toronto's Rotman School of Management. Joel Kotkin is executive director of the Center for Opportunity Urbanism in Houston and a fellow at Chapman University in Southern California.

The team already has a couple of projects in the works. A report on millennials moving back to the heartland will be released around December, DeVol said. Then around January or February, he said, the team will release a detailed study of how startups are affecting heartland economies.

Heartland Forward will also host the next invitation-only Heartland Summit, set for April 22-23 in Bentonville. The event's mission, according to theheartlandsummit.org, "is to showcase the exciting innovation happening between the coasts, spark frank conversations about the challenges the region is facing, and build networks to sustain economic growth and power problem solving across the country."

The first Heartland Summit, held in October 2018, drew about 350 business leaders, investors and others to Bentonville, including Deepak Chopra and Hillbilly Elegy author J.D. Vance. A few of the sessions may be viewed on the event's website.

Michael Pakko, state economic forecaster with the Arkansas Economic Development Institute at the University of Arkansas at Little Rock, said he thinks Heartland Forward is "a great idea." Looking at the features and issues that are significant to a region "can give us a better view of conditions even down to the local level," he said.

Pakko added that the think tank's presence in the state will likely enhance the stature of Arkansas' economic research community.

"I would hope that their presence will provide an opportunity for economists, and other researchers for that matter, around the region to participate and collaborate in learning more about the issues that are important to this region of the country," he said. "I look forward to having them as new neighbors in the state."