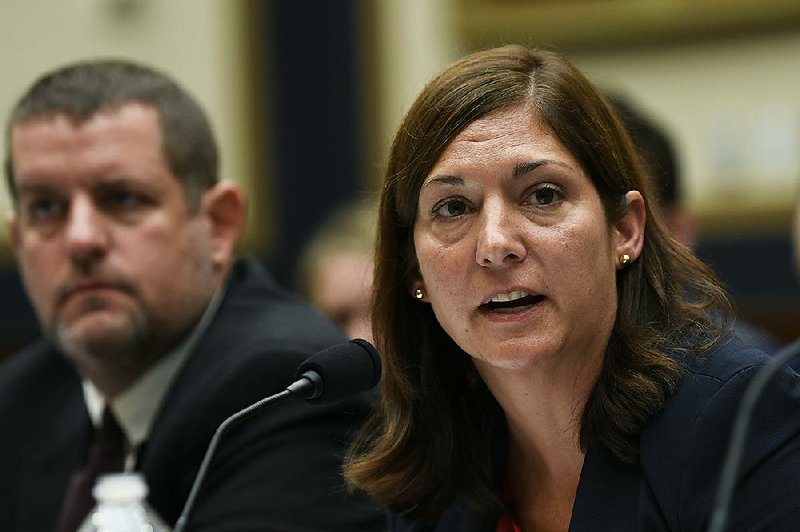 WASHINGTON -- A congressional hearing on election security broke Tuesday along political lines, highlighting the difficulties in getting lawmakers to address the threat outlined by federal officials who have warned that Russia and other adversaries are looking to interfere in the 2020 election and illicitly shape voter opinion.

The divide was on display Tuesday at a House Judiciary Committee hearing, which also underscored the absence of bipartisan consensus about the foreign threat to American voting and about how best to safeguard the country's election system heading into next year's vote.

Democrats largely confined their questioning to the ambitions and capabilities of foreign governments and pressed federal officials about whether they had the resources they need to prepare for and respond to any potential problems.

Multiple Republicans, on the other hand, used the hearing to call into question the integrity of the FBI, rail against House Democrats' ongoing impeachment inquiry against President Donald Trump and suggest that the president was within his rights to press Ukraine to investigate the 2016 U.S. presidential election.

Several mentioned Peter Strzok, the agent fired last year for derogatory text messages about Trump that he sent while helping lead the investigation into ties between Russia and the Trump campaign.

"Would you agree that the FBI's reputation was significantly damaged by political bias against the president, President Trump specifically, [that] was exhibited by number of top-level officials in your organization?" Rep. Steve Chabot, an Ohio Republican, asked Nikki Floris, an FBI deputy assistant director in the counterintelligence division.

"Sir, I'm not going to comment on any damage or lack of damage to our reputation. Thank you," Floris replied.

Chabot shot back: "OK. Well, I'll answer it, it really was."

The hearing featured testimony of witnesses from agencies, including the FBI, Justice Department and Homeland Security Department.

Though the hearing was about election security ahead of next year's vote, it was also impossible to untangle it from contemporary politics and the impeachment inquiry.

At one point, Rep. Jerrold Nadler, D-NY, the committee chairman, asked the four witnesses if they believed that it was appropriate for an American president to ask a foreign government to investigate a political rival. That was a reference to Trump's prodding, in a July phone call, of his Ukrainian counterpart to investigate Democrat Joe Biden.

Three of the four government witnesses answered "no."

The lone exception was Adam Hickey, a deputy assistant attorney general in the Justice Department's national security division, who said, "I'm not going to comment on the president's activities, but we are committed to confronting violations of the law wherever we find them."

He later said he did believe that anyone who suspects improper foreign influence should contact federal law enforcement.

The hearing also touched on the public's right to know when a particular electoral system is hacked. The issue arose after members of Florida's congressional delegation complained that the FBI and the Department of Homeland Security would not publicly identify the two counties where Russian hackers gained access to voter databases before the 2016 election.

Hickey said the federal government wants to "encourage and guard the trust of the states so that they are willing to call the FBI and not worry that we are going to release their identities or the problem publicly." He said he believed that it was a matter for states to decide how much to disclose to their constituencies.

He said the FBI was reviewing guidance on how to handle victim notification during elections.

"I anticipate that we'll continue to notify system owners and operators, which may be local officials, but also providing a heads-up to the politically accountable chief state election official or board so that they're aware of what the FBI is doing at a more local level," Hickey said.