CHEAP EATS: Assembly line at Saladworks in west Little Rock makes it easier to be green 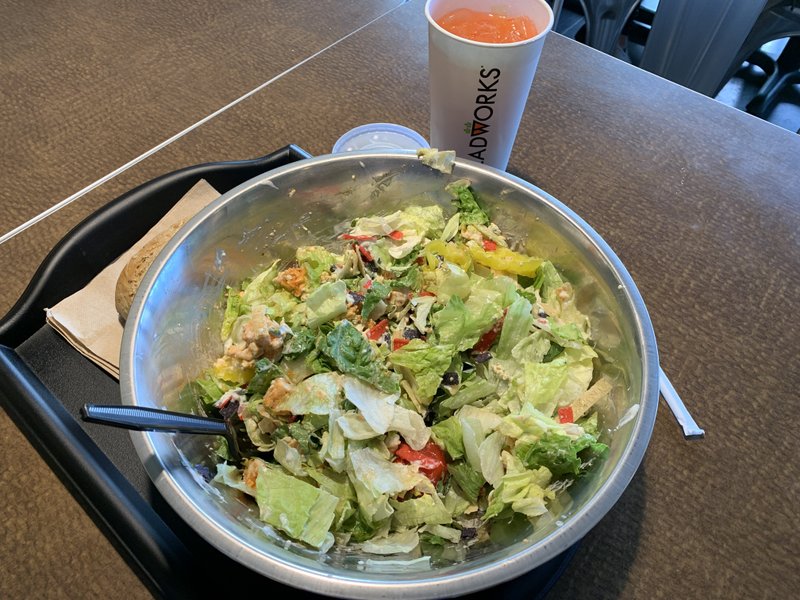 The salad bar was a big thing in the '70s and '80s. Big enough that there were entire salad-bar restaurants.

Load up a bowl with greens, vegetables, toppings and dressing and feel like you're eating healthy.

Cuisine: Salads, plus sandwiches and soups

There are still a few salad bars around, even though their popularity has waned. It's possible that the advent of the prepackaged, take-home supermarket salad mix (occasional salmonella and listeria outbreaks notwithstanding) has something to do with that.

That doesn't mean, however, that the idea has disappeared entirely. It has merely morphed into the assembly-line-salad restaurant, well represented locally by ZaZa Fine Salad & Wood-Oven Pizza Co., which really does create fine salads assembled on command from demonstrably fresh ingredients.

And on a national basis, there's the Saladworks chain, based in the Philadelphia suburb of Conshohocken, Pa., with more than 100 outlets, including the one that recently opened in the U-shaped shopping plaza at Chenal Parkway and Wellington Hills Road. (Look for the anchors: Saladworks' next-door neighbor, Painted Tree Marketplace, and the Pharmacy at Wellington.)

It offers a wide array of options, starting with seven "bases" — including a romaine-iceberg lettuce blend, spring mix, baby spinach, chopped kale, pasta, brown rice and quinoa. Top that with four dozen toppings, vegetables, "proteins" and garnishes, plus a choice of at least a dozen dressings. The menu helpfully provides calorie counts (but not counting the calories in the dressings, which you will have to check on separately) and labels to identify vegan, vegetarian, dairy-free and soy-free.

Enter the establishment and follow the floor-imprinted directions to the back of the room, where the assembly line begins. Pick your portion; the salad maker thereupon scoops, tosses and mixes the ingredients up in a major-league metal bowl, in which the salad is also served — be careful, it slides a bit on the plastic tray. Pay, pick up plasticware at a station at the front and get your drinks — not just sodas, but also a variety of juice blends rotating in clot-preventing spinners — on the opposite side of the dining room.

The color scheme is primarily pastel green and bright orange, with composite-topped tables (three high ones in the middle, lower ones surrounding, with bar seating at one of the front windows) and brushed aluminum patio chairs. The artwork on the walls depicts stylized salad ingredients, including the fruits and vegetables over the juice spinners and the one on the back wall of a bunch of carrots.

You can create your own salad for $10.49 — pick a base, add up to five toppings ("premium" toppings bear an added cost, of course) and choice of dressing.

We played it a bit safe and went with the Mandarin Chicken Salad ($10.49, a modest 230 calories), which starts with spring mix and adds generous amounts of cubed chicken, Mandarin orange slices, cucumbers, carrots, dried cranberries and "wonton strips" (aka "chow mein noodles"). We chose the recommended sweet sesame dressing and the salad maker let us decide how much we wanted, light, medium or heavy, so we went with somewhere north of medium — and, of course, we overdid it. (Theoretically, there's a 99-cent up-charge for extra dressing. How much extra is extra is not exactly defined.)

The "Buffalo Blue" (also $10.49) lacked the kick we were expecting from the menu description — chicken in an "original buffalo New York spicy sauce," tossed with the romaine-iceberg blend, grape tomatoes, banana peppers, tortilla strips, blue cheese and blue cheese dressing. The sauce wasn't particularly spicy. In fact, with the exception of the blue cheese crumbles, of which there weren't nearly enough, and the rather discordant tang of the banana peppers, it was pretty bland.

Salads come with a choice of white or wheat roll; the seeded wheat roll was fresh and nicely chewy.

We applied that common $10.49 price tag to "make it a combo" by pairing a small chicken noodle soup with half a tuna salad sandwich. The soup surprised us: firm, filling noodles and more of them than the small chunks of chicken, plus some carrots and celery in a lightly herbed and only slightly oily broth.

Saladworks makes its tuna salad with olive-oil mayonnaise, making it at least seem healthier; it slopped a bit out beyond the edges of the sourdough bread, cut Texas toast-thick; we would have probably enjoyed the sandwich more if it was actually toasted, but the menu doesn't provide that option and we're pretty sure the assembly line doesn't have that capacity. (Hey, Saladworks executives ...)

Almost everything they make, with the possible exception of the soups, can be done up as a wrap.

Customers are supposed to bus their own tables (just about everything but the tray and the metal bowls goes into the trash), which means, unfortunately, that the staff isn't out in the dining area wiping down tables as often as they should be. Otherwise, the staff couldn't be friendlier and they all appeared to be very well trained — not always something you encounter at chain places.

CORRECTION: Saladworks is located in the U-shaped Wellington Center at 15400 Chenal Parkway, Little Rock. And the customer options start with seven bases, including a romaine-iceberg lettuce blend, spring mix, baby spinach, chopped kale, pasta, brown rice and quinoa. An earlier version of this review incorrectly reported the shape of the building and number of base items.