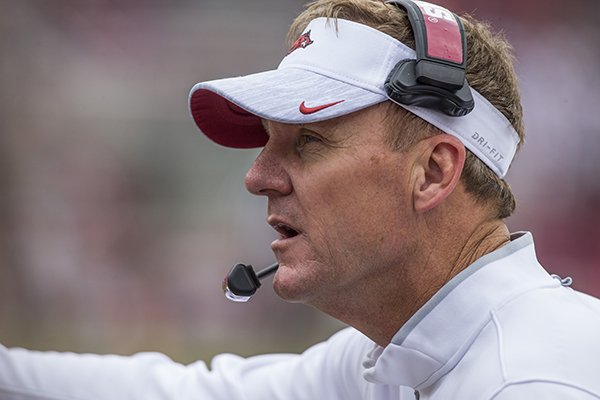 Arkansas coach Chad Morris is shown during a game against Auburn on Saturday, Oct. 19, 2019, in Fayetteville.

All 14 SEC coaches are among the top 50 highest-paid coaches in the nation, according to USA Today's annual salary survey that was released this week.

Five SEC coaches are in the top 10.

Arkansas Coach Chad Morris, who is 4-15 in his second season with the Razorbacks going into Saturday night's game at No. 1 Alabama, is 28th on the list at $4 million, which includes a $500,000 retention bonus he received this year.

Other SEC coaches' rankings on the list and salaries are:

South Carolina Coach Will Muschamp and Tennessee Coach Jeremy Pruitt, whose teams play Saturday in Neyland Stadium in Knoxville, both were upset with some calls last week.

The Gamecocks were penalized five times for 60 yards in their 38-27 loss to Florida, including an unsportsmanlike conduct flag against Muschamp.

"The guy ran 40 yards away and dropped the flag," Muschamp said in his postgame news conference when asked what he did to draw the penalty. "I have no idea. I'd rather him drop it on my feet."

Muschamp was asked another another question about officiating.

"I'm not going to comment about anything else," he said. "Don't go 40 yards away and drop a flag. How about that?"

But Muschamp couldn't help but say under his breath, "Gutless."

Tennessee came into its game at Alabama averaging five penalties for 49.8 yards, but the Volunteers were flagged 13 times for 93 yards in their 35-13 loss to the No. 1 Crimson Tide.

"I'll be the first to say the officials have a very tough job," Pruitt said after the game. "There was a lot of flags. I know this, we've played six games and we've been the least-penalized team in the SEC.

"And probably got more penalties in the first quarter than we've had for an entire game. So, I don't know. We might be guilty, I don't know. We'll watch the tape and see, and if we are, we'll correct them. And if we're not guilty, there's not much we can do."

The penalty that might have upset Pruitt the most was defensive lineman Darrell Taylor being called for roughing the passer after Alabama quarterback Mac Jones threw an incompletion on third and 10 from the Crimson Tide's 24 with Tennessee trailing 21-13.

Taylor wasn't called for the hit on Jones, but for putting his hands on Jones' back and pushing off to get up.

Given a new set of downs, Alabama drove for a touchdown to extend its lead to 15 points.

"The call on Darrell Taylor was absolutely not a penalty. It's not a penalty," Pruitt said in his postgame news conference. "Would it have changed the game? I don't know. I know they would have punted instead of going on and scoring on that possession.

"Was there a couple of times there where I felt like they took shots on our quarterback? Absolutely. Just the consistency there. It's a tough deal. Accountability is even tougher."

"I don't think he is just trying to get up," Austin said on ESPN's broadcast. "He's sending a message. He's shoving him down with both hands into the ground. I'm OK with the call."

Missouri is 5-2 and needs one more victory in its final five games to become bowl eligible.

But right now the Tigers don't know whether they'll go bowling with six or more victories.

Missouri is still waiting to hear the NCAA's decision on an appeal to overturn a bowl ban, which was among the sanctions levied for academic fraud committed by a tutor.

Tigers Coach Barry Odom said Wednesday on the SEC coaches teleconference that he had expected a ruling by now, considering Missouri officials presented their case to the NCAA committee on infractions in mid-July.

"When we started the season, I kind of had a target date in mind when we would know," Odom said. "I've tried to prepare our team. It's almost to the point now where they're tired of me talking about it every time, because I don't have any new information.

"It's lingering, it's out there. We all know about it. We all know it's coming. But I wish there was more that I could report to our team."

Odom said he keeps talking with the players about the impending decision, even though there is no news, because he wants to make sure they stay unified and aren't affected by outside distractions.

"You don't have to believe everything that you read or the narrative of whatever the situation is," he said. "As long as we're all on the same page inside our building, then I like our chances."

Georgia is 30-6 since 2017, including 6-1 this season, but the Bulldogs heard boos from the Sanford Stadium crowd Saturday night when the first half against Kentucky ended with the teams tied 0-0.

After Georgia dominated the second half to win 21-0, Bulldogs Coach Kirby Smart was asked about the boos.

"No effect for me," Smart said. "I've got headphones on."

Smart, who was joking, said he respected the fans right to boo if they wanted.

"That's what they pay their money for, to give their opinions," he said. "And they are entitled to that."

Mississippi State freshman quarterback Garrett Shrader looks to be tightening his grip on the starting job.

"I'm not happy with some of the things, but I'm pleased with what he can do and bring to the table."

Shrader and the Bulldogs play at Arkansas on Nov. 2.

Vanderbilt Coach Derek Mason was emotional in an interview with the SEC Network after his Commodores beat No. 22 Missouri 21-14 on Saturday.

The Commodores came into the game as 21-point underdogs after losing at home to UNLV 34-10 the previous week to fall to 1-5.

"It's been a rough patch," Mason said. "But I told my team this, and I want everybody to understand this -- a lot of people want this job, so they think. But I'm the man that's built for this job.

Mason reiterated his confidence in being the right man for the Vanderbilt job when he spoke Wednesday on the SEC coaches teleconference.

"It takes a special dude to do this job," Mason said. "I feel like I'm built for it."

• LSU had scored in 39 consecutive quarters before the Tigers failed to put up any points in the fourth quarter of their 36-13 victory at Mississippi State. The last quarter in which LSU hadn't scored was in the fourth of the Tigers' 24-17 victory at Arkansas last season.

• South Carolina Coach Will Muschamp is 7-0 as a head coach against Tennessee, including 4-0 when he was at Florida and 3-0 with the Gamecocks.

Martin, a senior, began this season as a backup, but with JaTarvious Whitlow sidelined by a knee injury, Martin is the Tigers’ No. 1 rushing option. Martin had 10 carries for 84 yards at Arkansas last week, including a 52-yard run, and is averaging 5.9 yards per carry on the season with 44 attempts for 258 yards. Auburn needs a big game from Martin at LSU on Saturday to help take some pressure off Bo Nix, the Tigers’ true freshman quarterback. Martin has 265 carries for 1,489 yards for his career.

Arkansas at No. 1 Alabama

“We left a lot of points out on the field, which you can’t do. It’s an SEC week. Everybody wanted to talk about, ‘It’s just Vandy.’ But this is the SEC. You can lose any week, and obviously [this] proves a point.” — Missouri center Trystan Colon-Castillo after the Tigers lost 21-14 at Vanderbilt

“I think the key thing is to try to make the quarterback uncomfortable.” — Coach Gus Malzahn on what Auburn needs to do to slow down Joe Burrow and LSU’s offense

“This team will be a top-5 team again by the end of the year.” — Kentucky Coach Mark Stoops on Georgia after the Bulldogs beat the Wildcats