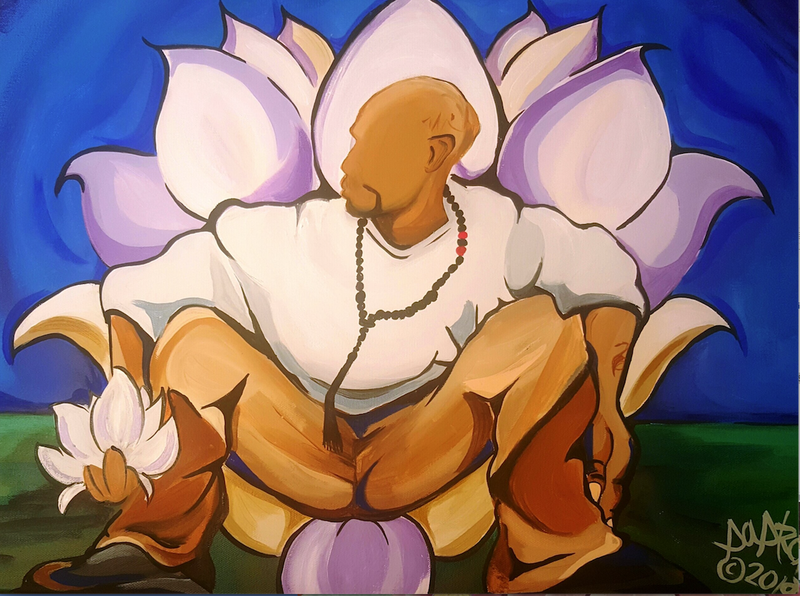 This acrylic on canvas piece by Sondra Strong is titled "Lotus: Rebirth of James Rucker." (Courtesy Compassion Works for All)

Meikel Church was more than a little surprised when he was invited to participate in Compassion Works for All's "Prison Portrait Art Project."

"I told them, 'I don't do portraits,'" says Church, who is a mixed media collage artist. Still, it was a challenge the North Little Rock artist, who assembles collages from cut-out paper images from magazines, books and other sources, couldn't resist.

Proceeds benefit Compassion Works for All

"One hesitancy I had was whether the crime the person committed would get in the way of my ability to make art."

Sondra Strong, an instructional facilitator in mathematics at Cloverdale Middle School in Little Rock who also is an artist, says she responded to an opportunity to "humanize someone who may be condemned by society."

"I believe there is always hope for everyone."

Church and Strong are among 26 artists chosen to participate in the benefit art show for the Little Rock-based nonprofit that teaches meditation and conflict resolution to inmates in Arkansas correctional facilities and distributes a newsletter to prisoners nationwide. The weekend event opens with a reception at 5 p.m. Friday at New Deal Gallery, 2003 S. Louisiana St., Little Rock. The exhibition and sale continue 11 a.m.-2 p.m. Saturday.

Morgan Leyenberger, executive director of Compassion Works for All, says inmates were invited to participate through a notice in the organization's Dharma Friends newsletter.

"We asked them for pictures and to write something about themselves. About 12 responded with complete submissions. Because we had 26 artists, we had to double up, so we tried to pair artists who have different styles."

Leyenberger says the event is an opportunity for the public to "connect with people living behind bars and understand their stories."

Proceeds -- 25% of the sale price of each artwork -- will benefit the organization.

The event, Leyenberger says, was the idea of one of the event's co-chairs, Ellie Wheeler. The other co-chair, Tanya Hollifield, recruited the artists. Both also have created art for the benefit.

Wheeler says she was inspired by a screening of 13th, a documentary about the history of mass incarceration.

"I like to paint and I thought maybe I could do something more focused to be supportive and the idea of an art show came up. I knew Morgan was in contact with incarcerated people, so I ran the idea past her. 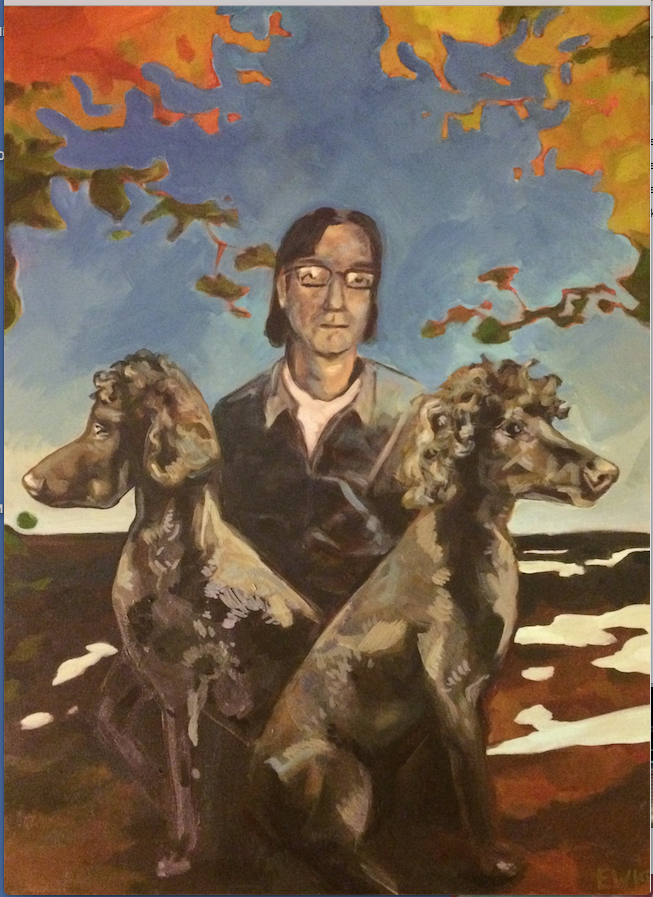 Ellie Wheeler created this acrylic on canvas titled "Don’t Believe Me." (Courtesy Compassion Works for All)

Wheeler created an acrylic portrait, inspired by a photo and a poem written by an inmate.

"His poem explores how people never see the full picture of another person," she says.

"I love the idea of advocacy and art," says Hollifield, who works with acrylic and mixed media. "I put the word out and the response from artists was bigger than I expected. We wanted a variety of styles and I think we got it. We have a nice cross-section of the art community."

Several artists reflected on their experiences creating work for the show. 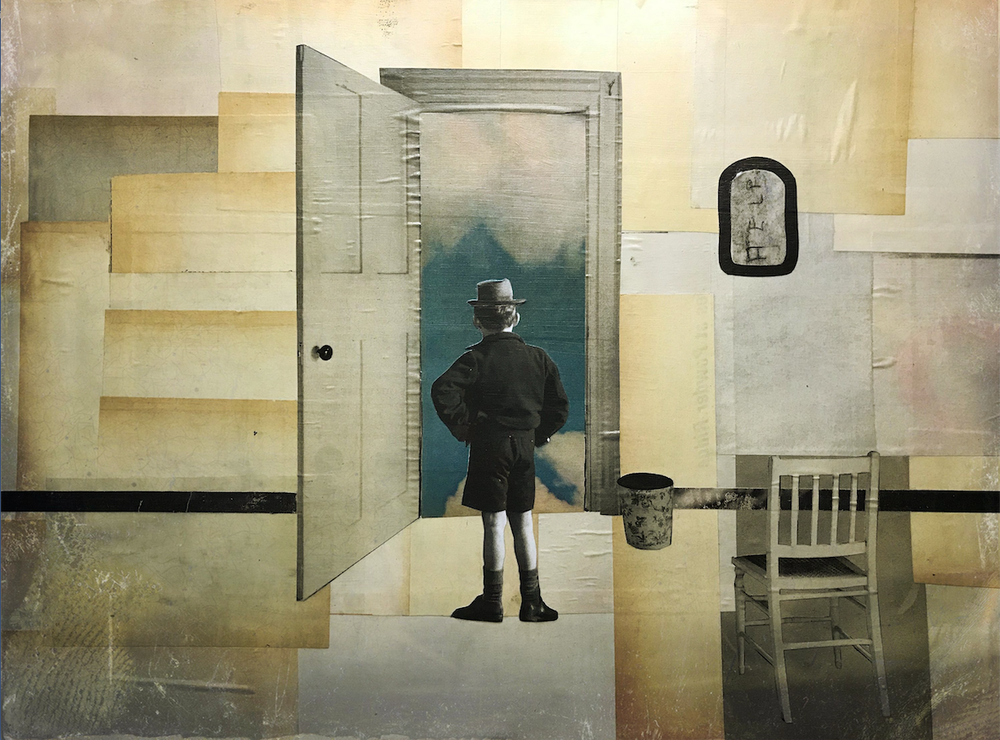 Meikel Church’s mixed media collage is titled Is "Learning Not To Die, The Same As Living." (Courtesy Compassion Works for All))

So, how did Church create a "portrait" using collage?

"It's more about the poem he wrote," Church says. "About being incarcerated, missing being outside, the sunshine. That's what I gravitated toward."

Church's collage shows a young man in a room, looking through a door at what's outside. A mirror on the wall has the word "help" written vertically. There is no reference to the crime the inmate committed.

"In the packet I received, there was an image of him at the time of his incarceration as a teenager, one of the letters he wrote to CWFA and a couple of suicide notes. He also included a poem called 'Missing Mother Nature's Feel.' The poem was very inspiring."

That inspiration enabled Church to finish his piece in about three days. "Usually I labor over images, but this time it came together quickly."

Church's subject was convicted in a 1999 school shooting in New York. "One person was injured, no one was killed," he says.

The inmate, Church says, participates in a program that speaks to students about violence. "He seems to own what he did and is trying to figure out why."

Church says he connected with the inmate because he also had problems with his anger growing up.

"I learned we're not all that different; we made different choices." 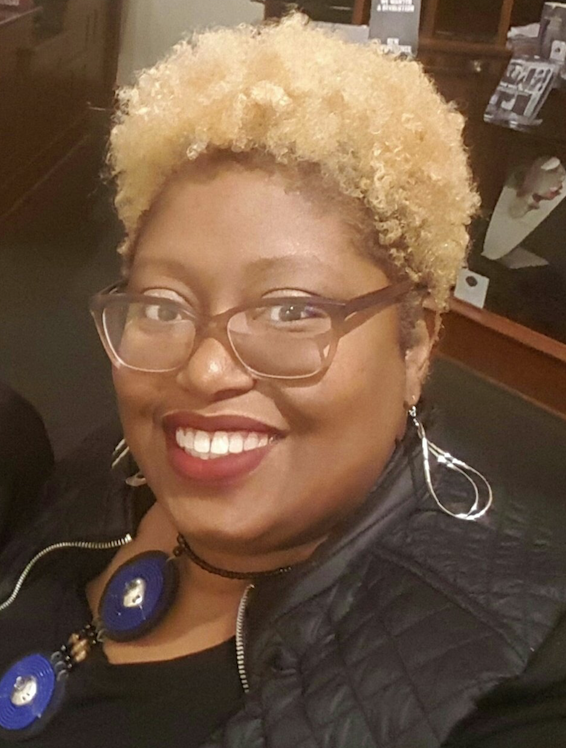 "I learned to paint as a child from my dad," Strong says. "He also had me watch Bob Ross' TV show and tell him about colors, design ..."

While she's happy to participate in this exhibition, Strong wants people to understand no one wants to "minimize the pain of victims and their families.

"Healing has to take place for all of those who were affected. Some family members also hurt because of unforgiveness."

As a teacher, Strong says she sees children in school every day where one decision can change their lives.

"I'm taking a view to help the youth coming up now, to show them there is a better way than violence. It's about the whole village coming in, planting seeds of hope, faith, positivity, to see there is something good inside each individual. We can change things if people lay down those stereotypes ... influences that make it seem it isn't worth dealing with."

The subject of Strong's painting wrote a letter about life in prison and how it changed his mindset. He practices Buddhism and studies Shaolin kung fu.

"I read the letter and looked at the photo and tried to understand what he is embodying. He sustains himself in this environment. The image that came to mind was the lotus, which represents the purity of mind, body and spirit even if one's past is muddy." So she depicted her subject in a "huge, stylized lotus."

Strong says she believes that "no matter what a person has done, we must remember they are a human being. There is always a chance to change, but it is hard work even under the best circumstances.

"I can be hard on people," she says. "This reminds me to have compassion. Everybody has a story and everybody can have a story of redemption. This show gives faces and voices to a population that is not unredeemable." 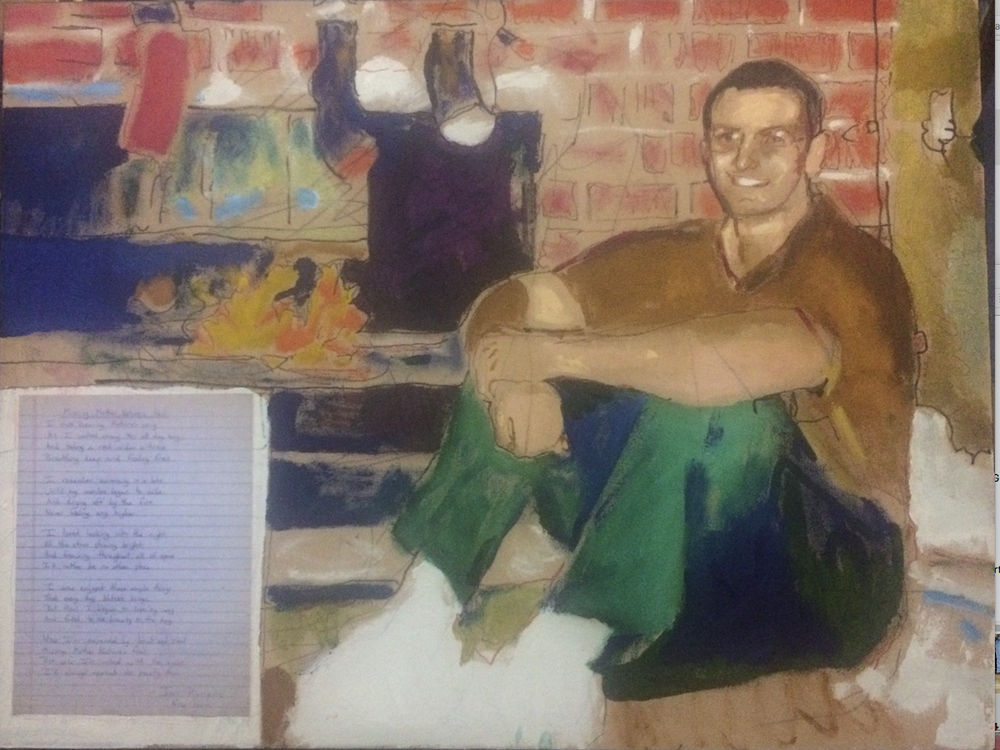 John Kushmaul’s "Jon of New York" is an acrylic and mixed media portrait. (Courtesy Compassion Works for All)

Familiar to many for his colorful acrylic paintings of scenes of downtown Little Rock, John Kushmaul was inspired by Johnny Cash and Sister Helen Prejean of Dead Man Walking fame as he worked on a portrait of an inmate.

"I'm a Cash fan; he reached out to prisoners. That was in the back of my mind as I worked on this," he says.

Most of Kushmaul's landscapes are painted from the photographs he takes.

"I also have a photography-based approach with portraiture," he says.

So when he got a packet with a photograph and a poem written by an inmate, Kushmaul says he "painted a portrait from the photo, played with the colors a bit and integrated an enlarged version of the poem into the work."

Kushmaul, who works as weekend assignment editor at television stations KARK and KLRT wasn't familiar with Compassion Works for All until he was asked to participate in this show.

"I am interested in not forgetting about people who are incarcerated," he says. "It is easy to look down on people in our society because of where they are."

The photo Kushmaul worked with showed the inmate sitting in front of a fireplace, with Christmas stockings hanging from the mantel, likely taken before he was sentenced to prison. Kushmaul says he does not know the nature of the crime.

"When people see the painting, I hope they can take away the humanity of it. He was going through life like everyone else, then it went off track. That doesn't make him less a person. He could be anyone's brother, uncle, cousin, son." 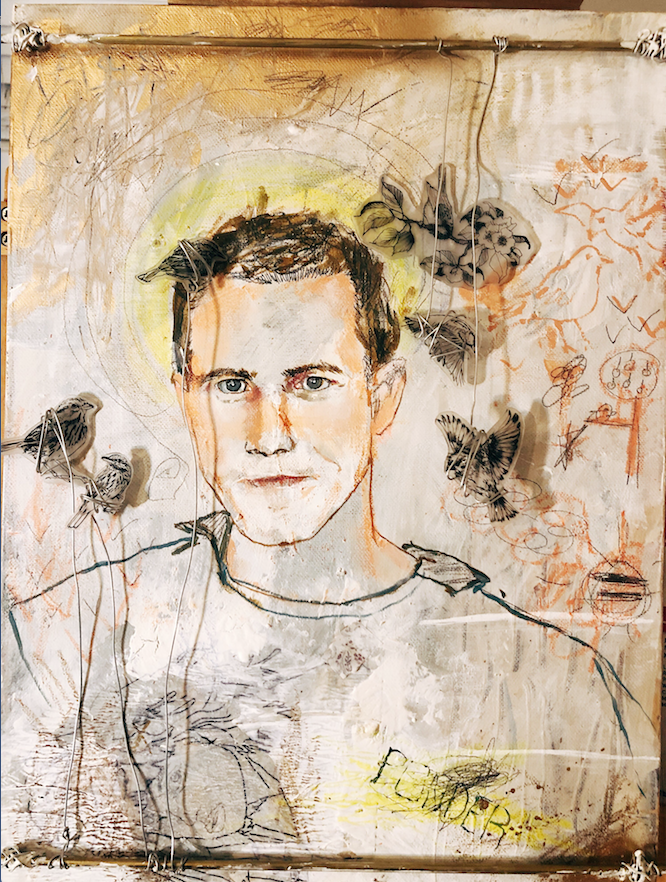 Milkdadd says painting a portrait of an inmate "made me thankful for my life, but also, maybe, sad."

She says the subject of her portrait is serving a life sentence at the Cummins Unit for a crime he committed at age 14.

"I really relate to him," says the 24-year-old Little Rock artist. "Some tough things happened to me when I was 14. I'm not comparing myself to him, but I feel a sort of ... a soft part of my heart for him."

The mixed-media artist says she received three pieces of written information, a photo and a drawing of a bird.

"I thought about all of it a lot," she says. "The way he wrote about things in the letter, the way he created this picture. Maybe I think about it too much.

"I wanted to approach it in a way he might like if he saw the painting." Her work includes representations of the bird drawing.

Most of her work as an artist is commissioned portraits.

"I didn't have any restrictions on this one, so I could play around with it and use more mediums on this work."

The experience, she says, "fueled my thought process a bit more. I'm glad I was chosen to paint his portrait." 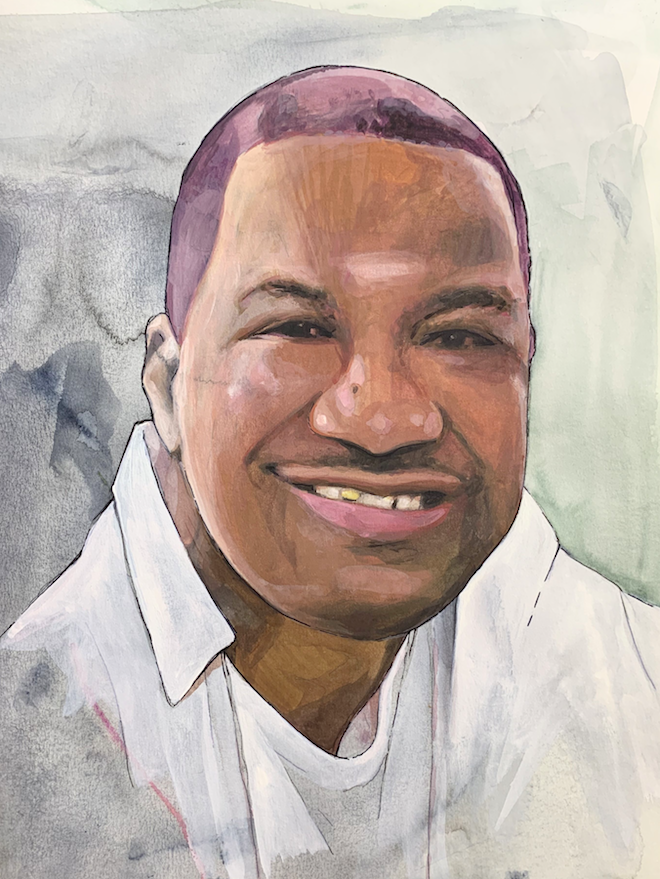 This watercolor, gouache and ink on paper portrait is by Kasten Searles. (Courtesy Compassion Works for All)

The process of creating a portrait of someone she couldn't see was an intriguing challenge for Kasten Searles.

"Part of the challenge is, in my own work I source images myself ... I'm more in charge of picking my subjects," says Searles, professor of graphic design and illustration at Henderson State University in Arkadelphia. "But this time, someone else decided who I was working with and sent information. That makes this show more interesting to me.

"I received two images and a piece of writing, a small paragraph. It felt like stream of consciousness, with a little on his outlook on life."

As she was sketching, Searles says she found the mystery of the process "pretty interesting." She was curious about his history. "From looking at a person's face for hours you can feel like you know them even if you truly don't. I feel I know something about this man I will probably never meet.

"This project feels connected to my current work, which is isolating objects in the environment that are a little ignored so people have to look at them and acknowledge them. It is good for an artist to take a person or something that may have been overlooked or forgotten about by society, to bring emphasis to that and show it in a gallery setting."

Searles says a goal of her work in this exhibition is to help people see those who are, or have been incarcerated, in a more caring way.

"People get out of prison and they struggle to find work; that circumstance hangs over them. Hopefully, seeing [inmates] in fine art will help people be open to seeing them in a new light." 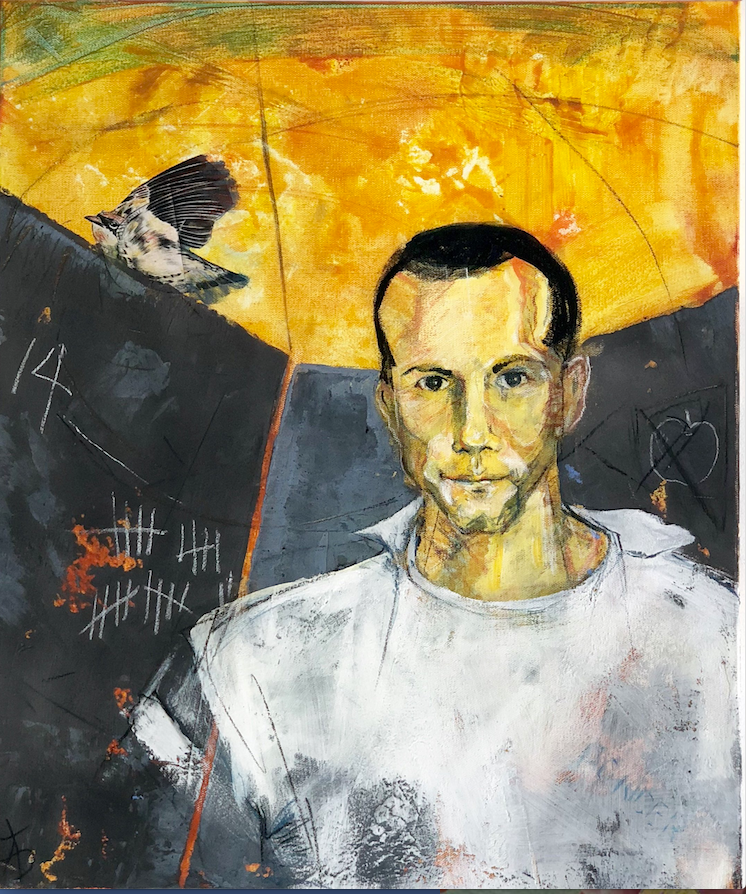 Hollifield wants people to take away more than just an appreciation of the artists' talents.

"We hope we've all shined a light on the humanity of people behind the walls."