At festival, tasting but no wasting; cornbread celebration in Little Rock working to ditch the plastic 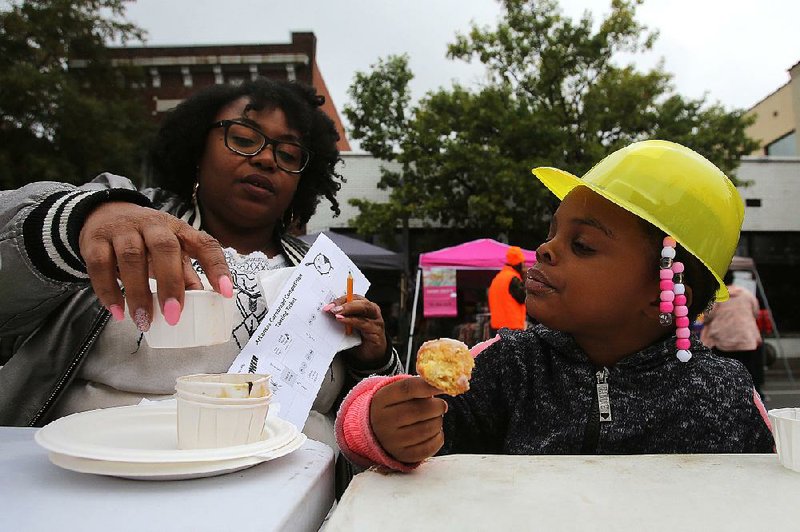 Almost anything is welcome at the Arkansas Cornbread Festival, but one item is quickly becoming obsolete: plastic.

Organizers of the ninth annual festival made a pledge this year to begin eliminating waste at the gathering that draws more than 3,000 people each year to the so-called SoMa community near downtown Little Rock.

"A festival like this produces a lot of waste, and a lot of that can be recycled," festival chairwoman Lori Ducey said Saturday as she stood near a jazz band playing in the Bernice Garden. "It's important that we consider what we're consuming and what we can keep from landfills."

Among booths offering jalapeno cornbread, cornbread pudding, art, clothing and woodworking items were waste tents where attendants helped festivalgoers decide where their trash should be placed.

"A lot of people don't really know where their trash should go," said Antionette Williams, a Parkview High School student who volunteered Saturday to work at the festival. "Like Solo cups, they aren't' recyclable because they have Styrofoam in them. I didn't know that."

Williams stood near three bins -- one for general waste headed toward the landfill, one for food and plant matter headed for American Composting in North Little Rock, and one for recyclables heading for Natural State Recycling, which accepts more types of plastics than the city's recycling service does.

Williams said she volunteered as a part of her participation in Beta Club at Parkview High, but also because she wanted to learn more about recycling.

"It's good for the environment, and I like learning about it," Williams said. "And with global warming, if we don't do this now, it might be too late."

[Video not showing up above? Click here to watch » https://www.youtube.com/watch?v=jcrbjpUj_ZE]

The festival has grown in its nine-year run, Ducey said. On Saturday, it had 68 vendors, nine amateur cornbread bakers and eight professional cornbread connoisseurs.

Among the cornbread cooks was Taylor Scott, a chef in training at University of Arkansas-Pulaski Technical College, who prepared a smoked duck and cowboy panzanella. Chris Naus, along with Amanda Heinbockel and Ben Thesing, prepared a jalapeno cheddar cornbread with Anasazi beans.

Naus' booth, dubbed "Cornbread for Ed: Craving Local Control Since 2015," was named for Heinbockel, who is an art teacher at Little Rock Central High School.

Ducey said the festival phased out use of small plastic serving cups years ago and instead used paper souffle cups.

Also, attendees this year were encouraged to take along reusable water bottles because plastic, single-use water bottles were no longer available for purchase. Ducey said there were water filling stations throughout the festival site.

The goal, Ducey said, is for the festival to produce zero waste by 2024.

Kevin Hamman, who was serving up vegan cornbread and tofu salsa in The Root's booth Saturday, said that since the cornbread festival recently made it onto Forbes' "5 Fall Festival For Food Lovers" list, going green could encourage other festivals to push for zero waste. 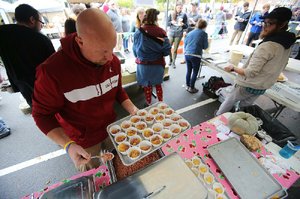 Photo by Thomas Metthe
Kevin Hamman puts together cornbread samples Saturday in The Root Cafe booth during the cornbread festival. More photos are available at arkansasonline.com/1027cornbread/

Print Headline: At Little Rock festival, tasting but no wasting