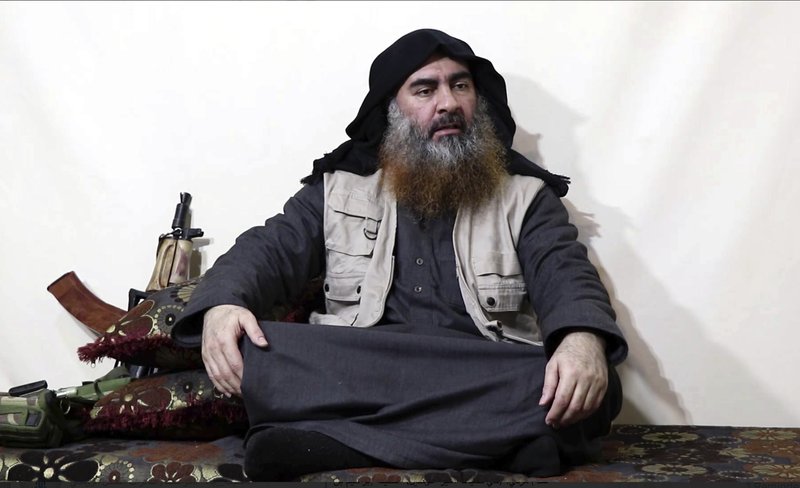 FILE - This file image made from video posted on a militant website April 29, 2019, purports to show the leader of the Islamic State group, Abu Bakr al-Baghdadi, being interviewed by his group's Al-Furqan media outlet. The IS erupted from the chaos of Syria and Iraq's conflicts and swiftly did what no Islamic militant group had done before, conquering a giant stretch of territory and declaring itself a &quot;caliphate.&quot; U.S. officials said late Saturday, Oct. 26, 2019 that al-Baghdadi was the target of an American raid in Syria and may have died in an explosion. (Al-Furqan media via AP, File)

WASHINGTON -- Members of the Arkansas congressional delegation welcomed news Sunday of the death of Abu Al-Baghdadi, the self-proclaimed caliph of the Islamic State.

In a text message, U.S. Rep. Rick Crawford, a Republican from Jonesboro, lauded those who made the successful raid possible.

"In dealing a death blow to the founder of the Islamic State, our Special Operators and Intelligence Community demonstrated once again why they are the world's preeminent force in counterterrorism. Others around the world who seek to foment radical ideologies by terroristic means should be on notice that they will soon suffer a similar fate," the 1st district congressman wrote. "America -- and indeed the world -- are indebted to these [consummate] professionals who protect liberty and free oppressed peoples around the globe."

Crawford, a member of the House Intelligence Committee, also said it was prudent for the White House to limit access to the information.

"In a mission like this, operational security is paramount. The President's decision not to share his intentions beforehand was based on that, and the fact that there are too many in Congress who do not respect the need to maintain 'radio silence,'" he wrote.

Given the number of leaks, "it's easy to understand the President's decision to wait until the operation was complete before sharing any details -- with members of either party," Crawford wrote.

"Under the circumstances, I'm not sure it's realistic to think ordinary sharing protocols with the opposition party would be observed, even after the fact, given the Democrats' ongoing obsession with -- and active engagement in -- this impeachment charade," he added.

Crawford was the only member of the all-Republican delegation Sunday afternoon to respond to questions about President Donald Trump's decision to withhold details from congressional leadership.

Comments on the raid itself were plentiful.

In a written statement, U.S. Sen. Tom Cotton of Dardanelle praised U.S. fighters for their bravery and President Donald Trump for his "decisive leadership."

"This raid serves as a reminder to America's enemies that there's no safe place in the world for them to lay their heads. It also reminds us that strength and vigilance are the only way to defeat terrorist groups like ISIS and Al Qaeda, which continue to threaten America and our allies," Cotton said.

In a written statement, U.S. Sen. John Boozman of Rogers called U.S. Special Forces "the best in the world," adding, "The successful operation that led to the death of Al-Baghdadi is a devastating blow to ISIS."

In life, Al-Baghdadi "oversaw some of the most horrific acts ever carried out against innocent people," Boozman said.

"I commend our intelligence professionals and our military leaders and personnel who successfully planned and executed this operation. Let it serve as a reminder to every terrorist: the U.S. military is relentless and will hunt you down," Boozman added.

"My thoughts are with the innocents of Iraq and Syria who suffered as a result of the hate and terror of ISIS. The world is a better place without Al-Baghdadi in it," the 2nd district congressman wrote.

U.S. Steve Womack of Rogers trumpeted the news on Twitter. "Eliminating this terrorist is another victory against evil and shows that you can't hide from the United States," the 3rd district congressman declared. "God bless our Special Forces and all those who ensured this mission was completed."

In a written statement, U.S. Rep. Bruce Westerman of Hot Springs called the raid "a huge victory against ISIS."

"I'm grateful to every service member who risked their life during the operation and administered justice to an enemy of the United States and freedom-loving people around the world," the 4th district congressman added.