Searcy vet to be inducted into hall of fame 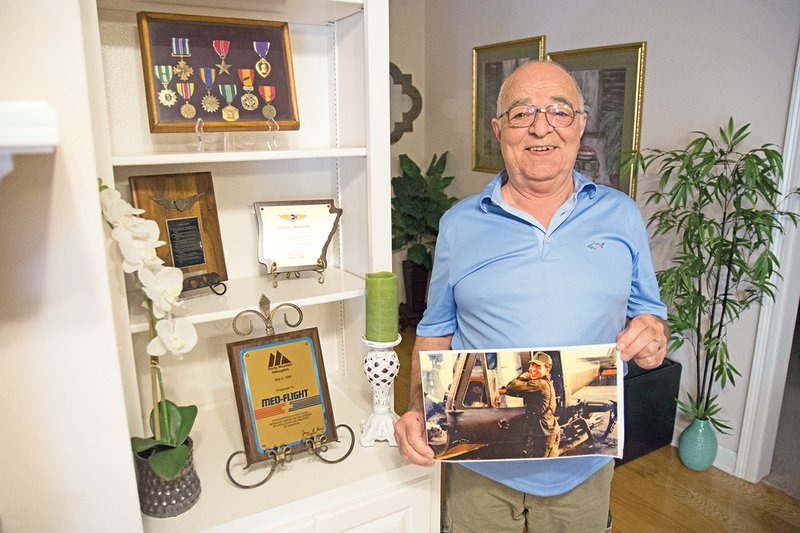 Retired Army Maj. James Edward Mason III of Searcy displays some of his military medals in a shadowbox, as well as plaques of appreciation for his service to the MedFlight program in Arkansas. He also shows a photograph of him and his bullet-riddled helicopter in Vietnam, noting that he was 22 when he served with the Army in Vietnam.

“I thought it would be fun to fly a helicopter,” he said, smiling. Mason, 72, used his skills not only as a pilot in the Army and Arkansas Army National Guard, but also throughout his civilian career as an emergency medical services helicopter pilot.

U.S. Sen. John Boozman, R-Ark., will present Mason and the other inductees with the Hall of Fame medallion at a banquet ceremony beginning at 6 p.m. Saturday at the Embassy Suites in Little Rock. Tickets may be purchased individually for $55 or $500 for a table of 10 by calling the Arkansas Military Veterans’ Hall of Fame at (501) 902-9706.

Mason said he was “surprised … and pleased about the honor, and a little embarrassed. I’ve never been one to blow my own horn. I have to give credit to my wife, Phyllis. … She is a strong woman. She has been with me every step of the way.”

Mason flew a Cobra gun ship in Vietnam, where he served for one year. He served a total of nine years of active duty in the Army and 23 years in the Arkansas Army National Guard; he also worked as an EMS helicopter pilot for 23 years.

His military awards include the Purple Heart, the Distinguished Flying Cross with Oak Leaf Cluster, the Bronze Star for exceptionally meritorious combat achievement, two Air Medals for heroism, one with a “V” device for valor, and the Army Commendation Medal. He also received the Vietnam Service Medal with three campaign stars, the Republic of Vietnam Campaign Medal, the Republic of Vietnam Cross of Gallantry with Palm, the National Defense Service Medal and the Army Aviator Badge.

Mason was born in Newport and grew up in Bald Knob. He graduated from Bald Knob High School in 1965. He attended Arkansas State University in Jonesboro and later received an associate degree in business from the University of New York through correspondence courses.

“I had a friend who was home on Christmas leave from the Army,” Mason said. “He loved being in the Army. I went with him to visit his recruiting sergeant, and he introduced me to the sergeant. The sergeant started looking through his files and told me I’d better get my things in order … that I was probably going to be drafted within the next two months.

“I thought I was too little to wade in the mud, so I joined to avoid being drafted … so I could maybe choose what I wanted to do,” Mason said, adding that he completed basic training at Fort Leonard Wood, Missouri, and advanced individual training at Fort Sill, Oklahoma.

“I completed OCS at Fort Sill,” Mason said. “They told us we could choose any military school we wanted to, and I chose to attend helicopter flight school. I thought flying a helicopter would be fun. I was accepted, and the rest is history.

“I was sent to Fort Wolters, Texas, for four months and finished at Fort Rucker, [Alabama], and then Hunter Army Airfield, where I was trained to fly the Cobra helicopter,” he said.

It was during his time at Fort Wolters that Mason married the former Phyllis Hays of Judsonia.

“They let him off half a day to get married,” Phyllis said, laughing. They were married in 1968.

“Phyllis is a strong woman,” Mason said. “She knew I was going to Vietnam, but she wanted to get married anyway. The man she married came home a changed man. She stayed with me through it all.

“That was a hard year,” Mason said solemnly. “I was wounded. … I actually should have had two Purple Heart medals, but one was never recorded.”

Recalling one encounter with the enemy in Vietnam, Mason said, “Bullets came up through the bottom of the helicopter. … One hit me in the foot and expanded as it came up my leg. The pilot kept asking me if I was hit. … I was sitting in the co-pilot’s seat. I was going to tell him, ‘Yes, I think so, but I’d better check to make sure.’ I was never able to say that. All I could do was pat my foot on the floor. … I just kept patting my foot.

“When we finally got back and landed, I saw that the bullets had hit my C-rations, which were stored under the seat,” Mason said. “There was a can of peaches in those C-rations. … They were ruined. You didn’t get peaches very often. … I was really mad about that. I still had my leg but not my peaches.

“That’s about the closest thing to a funny story I have about my time in Vietnam,” he said.

“I flew helicopters out of Camp Robinson [in North Little Rock],” he said. “Then I went to work as an emergency medical services helicopter pilot.”

Phyllis said, “That was his way of giving back,” referring to his EMS service.

Mason first flew EMS helicopters for two years for Air Care II, which served states around the Gulf of Mexico. He then joined Baptist MedFlight as one of the first pilots when it began operations in 1984 at Baptist Health in west Little Rock. He flew five years as a Baptist MedFlight pilot and flew the rest of his 23 years in that field as a relief pilot.

The Masons, who lived in Bald Knob 40 years before moving to Searcy four years ago, have two adult children.

The family attends Valley Baptist Church, where Jim is a deacon and taught Sunday School.

“We are a family of faith,” Phyllis said. “We love the Lord.”