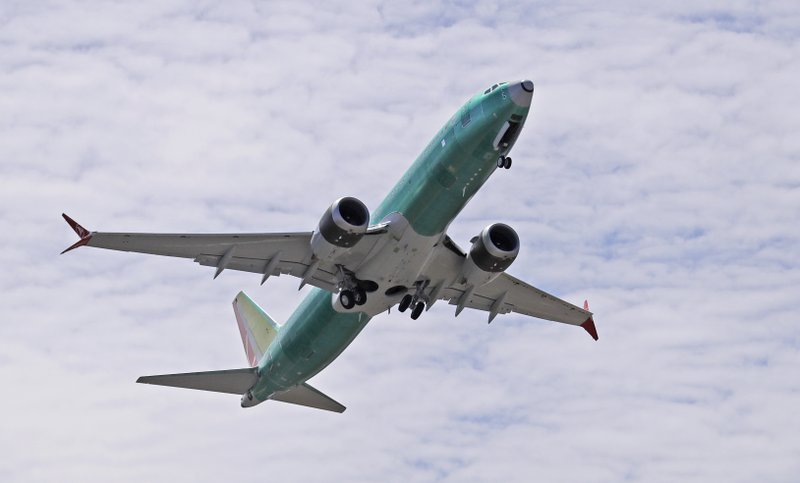 FILE - In this May 8, 2019, file photo, a Boeing 737 MAX 8 jetliner being built for Turkish Airlines takes off on a test flight in Renton, Wash. On the anniversary of the first crash of a Boeing 737 Max, the CEO will begin two days of testimony before Congress by telling lawmakers that the aircraft company knows it made mistakes and is throwing everything into fixing the plane. (AP Photo/Ted S. Warren, File)

On the anniversary of the first of two deadly crashes involving two 737 Max jets, Boeing's chief executive officer will tell Congress that the aircraft company knows it made mistakes and is throwing everything into fixing the plane.

"We have learned and are still learning from these accidents," Dennis Muilenburg said in comments prepared for delivery today to a Senate committee. "We know we made mistakes and got some things wrong. We own that, and we are fixing them."

A key lawmaker said Monday that Boeing should have gotten things right the first time, before the Max began carrying passengers.

Muilenburg is scheduled to testify today before the Senate Commerce Committee, then again on Wednesday before the House Transportation Committee. Boeing released his prepared statement Monday.

The New York Times reported Sunday that in legislation passed weeks before the 737 Max crash in Indonesia a year ago that killed everyone on board, Congress handed airplane manufacturers even more responsibility for certifying safety. The newspaper reported that Boeing and its allies pushed for the measure over the objections of the Federal Aviation Administration.

Muilenburg's appearances in Washington come as Boeing faces investigations by both committees and a criminal investigation by the Justice Department. It is also being sued by families of some of the 346 people who died in the crashes of a Max off the coast of Indonesia on Oct. 29, 2018, and another in Ethiopia on March 10.

In their final report on the first crash, Indonesia investigators said last week that Boeing's design of a key flight-control system made the plane vulnerable if a single sensor failed -- disregarding the aviation industry's long reliance on redundant systems to prevent disaster. They also faulted Lion Air, which operated the plane in the Indonesia crash, and U.S. regulators who approved the Max for flight.

Rep. Peter DeFazio, chairman of the House Transportation Committee, said he will ask Muilenburg why Boeing didn't tell the FAA about changes during development of the Max that made the flight-control system called the Maneuvering Characteristics Augmentation System more powerful. DeFazio suggested that Boeing concealed the true power of the system to discourage regulators from examining the system more closely.

On both fatal flights, faulty sensors caused the flight control system to push the planes' noses down, and pilots were unable to save the aircraft. Boeing is now making the nose-down pitch less frequent and powerful, and it is adding redundancy by tying it to two sensors and two computers instead of one each at a time.

"They seem to have done what they should have done to begin with, which is they made the system less radical," DeFazio told reporters. "There are numerous regulators looking at this, it isn't just going to be the FAA. This will be the most thoroughly scrutinized fix in the history of the aviation industry."

Congress is expected to consider changes to the way FAA certifies new planes and its practice of deputizing employees of Boeing and other aircraft manufacturers to perform safety tests on key components.

Some relatives of passengers who died in the crashes want Boeing banned from conducting safety reviews -- they want FAA inspectors to do all that work. Such a change would require a big increase in FAA's budget. According to DeFazio, there are about 45 FAA inspectors overseeing 1,200 Boeing employees who conduct much of the actual testing.

According to the Times report, a few short paragraphs tucked into 463 pages of legislation last year gave Boeing one of its biggest lobbying wins: a law that undercuts the government's role in approving the design of new airplanes.

For years, the government had been handing over more responsibility to manufacturers as a way to reduce bureaucracy. The legislation cemented the industry's power, allowing manufacturers to challenge regulators over safety disputes and making it difficult for the government to usurp companies' authority.

Although the law applies broadly to the industry, Boeing, the nation's dominant aerospace manufacturer, is the biggest beneficiary. The Times report, based on interviews with more than 50 regulators, industry executives, congressional staff members and lobbyists, as well as drafts of the bill and federal documents, found that Boeing and its allies helped craft the legislation to their liking, shaping the language of the law and overcoming criticism from regulators.

In a stark warning as the bill was being written, the FAA said that it would "not be in the best interest of safety."

A labor group representing agency inspectors raised concerns that the rules would turn the FAA into a "rubber stamp" that would only be able to intervene after a plane crashed "and people are killed," according to internal union documents.

Weeks after the law was passed, the 737 Max jet crashed off the coast of Indonesia.

Political contributions from Boeing-affiliated political action committees and individuals more than doubled over the past decade to $4.3 million in the 2018 election cycle, according to figures from the Center for Responsive Politics, which tracks political funds. Boeing has emerged as the transportation sector's largest contributor in the 2020 election cycle by giving nearly $1.2 million, more than FedEx, Delta Air Lines and General Motors.

Information for this article was contributed by David Koenig of The Associated Press; by Natalie Kitroeff and David Gelles of The New York Times; and by Ryan Beene and Courtney Rozen of Bloomberg News.